Verlander's current contract was a $180-million pact he signed with the Tigers late in spring training in 2013. 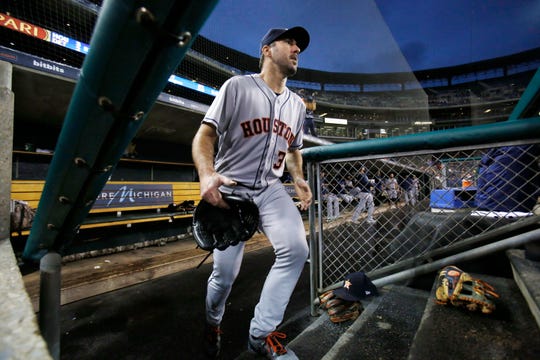 The Astros and Justin Verlander have agreed on a two-year extension. (Photo: Duane Burleson, AP)

Justin Verlander apparently likes getting these contract things worked out in the spring.

The right-hander was set to enter the final year of his contract, but instead, he has agreed to a two-year, $66-million extension, according to multiple reports.

Houston TV reporter Mark Berman was the first to report on the extension.

Verlander's current contract was a $180-million pact he signed with the Tigers late in spring training in 2013. He will make $28 million in 2019.

The Tigers traded Verlander, 36, to the Astros in August 2017, and he helped lead Houston to its first World Series championship. The Tigers still owe Verlander $8 million for 2019.

Verlander was 16-9 with a 2.52 ERA in 2018, finishing runner-up to Tampa Bay's Blake Snell in the American League Cy Young voting. It was Verlander's third runner-up finish in the voting, after he won the Cy Young and Most Valuable Player Award in 2011 with Detroit.

He broke into the major leagues in 2005 with the Tigers, who drafted him second overall out of Old Dominion in 2004.

Verlander's extension is the latest in recent days, as free agents-to-be have taken a look at the down open market and have decided to get their deals done in short order. Left-hander Chris Sale and the Red Sox just agreed to a five-year, $145-million extension. Snell also recently agreed to a five-year extension worth $50 million.