Beau Burrows among Tigers pitching prospects off to big starts

Beau Burrows among Tigers pitching prospects off to big starts 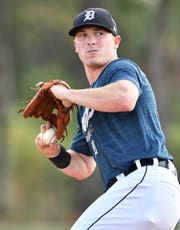 Toledo — While the unheralded big-league pitching staff has been unexpectedly stellar for the Tigers this season, a more expected development has been the starts posted by prospective members of future Detroit staffs.

The last four Tigers top draft picks all started their seasons strong on opening weekend for the minor leagues, combining for just one earned run in 20 innings.

Toledo’s Beau Burrows, Double-A Erie’s Matt Manning and Alex Faedo, and High-A Lakeland’s Casey Mize combined for 27 strikeouts. Along with the injured Franklin Perez — who is out a few weeks to start this season with shoulder tendinitis — the right-handers represent the inner-core of the Tigers system.

On Saturday in his Triple-A debut, Burrows went four innings, allowing two hits, two walks, one unearned run and striking out seven. He threw 80 pitches on an early-season pitch count as Toledo started the season 3-0 before an 8-4 loss Sunday to Louisville.

“I have the confidence to throw for strikes, to throw with conviction and I’m better when I do that,” Burrows said Sunday. “I thought I had a good spring. Stayed healthy, got stronger, I think I got better as a pitcher.”

A trip to Chicago last summer along with Manning to throw a bullpen session for Tigers pitching coach Rick Anderson and manager Ron Gardenhire was designed to give the duo a taste of the big leagues and send them hungry to the offseason.

“After that bullpen in Chicago, I felt myself more focused,” Burrows said. “I felt locked in, and I just carried that over into spring training. I was just thinking to myself, I have to have the same mentality in the game as I do in my bullpens. So far, it’s been working pretty well.”

Dave Littlefield, Tigers vice president of player development, said he noticed a different Burrows in Lakeland, where Burrows lived at Manning’s house there for the third straight spring.

“Beau is a talented guy who has just found a new level of commitment as he’s maturing,” Littlefield said. “His stuff is getting a little crisper and his breaking ball is tightening up some as is the command.”

Burrows said he’s worked with new Toledo pitching coach Juan Nieves on keeping mechanics and tempo consistent on each pitch, notably his curveball, which Burrows tends to slow down on sometimes.

The off-speed pitches have developed over time for Burrows, who was drafted No. 22 by the Tigers in the 2015 first round after throwing into the upper-90s at Weatherford High School in Texas.

After a solid start to his professional career, Burrows found trouble after a 2017 midseason promotion to Erie in the hitter-friendly Eastern League. That’s when working on the curveball, slider and changeup became paramount.

“When he first got up to Erie, he was a guy who could pitch with his fastball up to that point,” said Tigers catcher Grayson Greiner, his SeaWolves teammate in 2017. “He got up to Double-A and realized guys could hit that fastball, so you’ve got to develop some other stuff to make my fastball play up a little better.

"He’s kind of a bulldog on the mound, he goes right after guys.”

Nieves, who was let go as pitching coach by Miami after last season and threw a 1987 no-hitter for Milwaukee as part of a three-year MLB career, said Burrows has great poise.

“He showed it (Saturday) and didn’t really unravel,” said Nieves, who was the pitching coach for Boston’s World Series title in 2013, a postseason Tigers fans painfully remember well. “Even though he went four innings, there were some flashes of having above-average stuff. Being able to hone that and take it from there is key.”

Burrows, 22, is the second-oldest of the Tigers quintet of top pitching prospects — and second funniest, Burrows said, behind the 23-year-old Faedo, the “jokester” of the group — which includes a trio of 21-year-olds in Mize, Perez and Manning.

But as the only of the top prospects already just a drive up Interstate 75 from Detroit, Burrows said he’s still staying focused on the day-to-day work.

“You don’t really think about those kinds of things,” Burrows said. “You just kind of stay in your lane and do what you can here for the time being. Hopefully I’ll pitch well enough and be there soon.”