Niko Goodrum has already play three positions this season and has provided protection for Miguel Cabrera with six doubles as the No. 4 hitter. 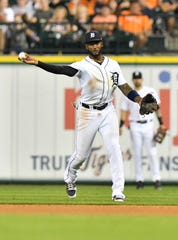 Detroit — It would make for a cute animated scoreboard game, don’t you think? Where’s Niko? Like "Where’s Waldo?" but only different.

Put up a graphic of Comerica Park on the Jumbotron, have cartoon images of Niko Goodrum at every position around the diamond and let the fans guess where’s he playing that day.

Silly, for sure, but Goodrum, the Tigers everyday utility player, will likely end up playing every position this season except pitcher and catcher. He’s already played center field, second base, first base and he’s been the designated hitter.

“This was always the plan for Niko,” manager Ron Gardenhire said. “He’s an athlete and we want his bat in the lineup every day. Being able to move him around the field is huge for us.”

Think about the Swiss Army knife value Goodrum brings to this club. We’re not talking about the prototypical banjo-hitting, play-every-fifth-day utility man here. He has proven himself to be a productive enough hitter from both sides of the plate to hit fourth in the order behind Nick Castellanos and Miguel Cabrera.

He made two highlight-reel plays from center field Sunday, throwing out a runner at second base and ending the game with a diving catch. He’d never played center field in a big-league game before this season and hadn’t played there at all since he was in Triple-A Rochester in 2017.

His primary defensive assignment was expected to be spelling shortstop Jordy Mercer, second baseman Josh Harrison and Cabrera at first. But with JaCoby Jones starting the year on the injured list and Mikie Mahtook scuffling offensively, he’s had to play in the outfield.

“That’s how I got to the big leagues, being able to play everything,” Goodrum said. “But not everyone’s cut out to do that. You can’t take most first basemen and put them in center. I’ve been blessed to play them all.”

To master one position at the big-league level is a rare feat. To do what Goodrum is doing — playing above-average defense at multiple positions — is almost incomprehensible. Especially for a player who is in the lineup every day. And, yet, with Goodrum it’s almost taken for granted.

“It’s not easy,” said Harrison, who knows all about the work it takes to play multiple positions on an everyday basis. “I know at times you can make it look easy. Guys that do it, we make it look easy. But there is a lot of work that goes into it.”

Especially when you factor in the impact of analytics on the game, all the different shifts and alignments that impact positioning, coverages and relay throws. There is essentially a playbook or positioning guide for every player at every position.

“It’s a tough job, but it’s definitely beneficial for a team,” Harrison said. “It allows the manager to do matchups and if something happens in the game, a guy goes down or whatever, here’s a guy who can step in and go from one spot to another.”

Harrison played five and six different positions for the Pirates from 2012-15. In 2014 he got 550 plate appearances while playing third base, left field, right field, second base and shortstop. And all he did that year was hit .315 with an .837 OPS.

But by that stage of his career, he’d learned how to manage his work load and keep himself fresh through the season. Goodrum had to learn that lesson the hard way last year.

“I think he’s learned to calm down a little bit.”

Well, just as Goodrum found a routine for his infield work, the center field chores were heaped onto his plate.

“Last year I’d come back into the clubhouse drenched (after pregame work) because I was doing every position,” Goodrum said. “You have to pace yourself. Feel what you need to do, what you might feel you need extra work on and go from there, rather than try to do everything.

“On days when I’m DHing, it gives me a chance to get work in at at least two positions. When I am starting, I kind of just focus on that position.”

Most of his work comes during batting practice. Goodrum will take fungos at shortstop and second, work on turning double plays and making throws. He said it’s important to see the ball off the bat from both sides of second base, to be able to read the different spin.

If he happens to be playing first or third base that day, he will focus most of his pregame work there.

Then, after he’s had his swings in the cage, he will head out to the outfield and track balls at all three spots.

“That’s the learning curve you’ve got to go through when you play multiple positions,” Harrison said. “You never know what your work load is going to be, per se, because each spot is different and you’ve got to get a feel for playing each spot.

“You may be feeling good here but at another spot you feel like you might need some work. He’s starting to figure all that out and knowing what he needs to do.”

In between all the extra field work, Goodrum still takes extra swings from both sides of the plate in the batting cage, maintains a weight-room regimen and does a battery of stretching exercises before the game.

“You’ve got to figure it out and get your body together,” he said. “I feel like I know what my body needs to do to get ready. I can balance my time out pretty good.”

It’s remarkable that he has any energy left by game time. But Gordon Beckham, who has also made a career of playing multiple positions, put what Goodrum is doing in the proper perspective.

“He’s doing it. And he’s fine at all the spots. He might not make the amazing play all the time, but he’s going to be very solid.”

Kluber, Indians: He’s coming off a rough spring and an ugly start against the White Sox, where he allowed six runs (four earned) and eight hits in 3.1 innings. In two starts his fastballs (sinker and cutter) have been ineffective — opponents are hitting .385 off the sinker and .323 off the cutter.

Zimmermann, Tigers: He’s thrown 164 pitches in two starts and of the 38 balls put in play, only one was registered by Statcast as barreled (hard-hit). His slider has been evil — hitters are 2-for-24 off it. But the Indians have been his kryptonite. He’s 0-5, allowing 32 runs in 26 innings.