Fireballer Jose Cisnero could be a find for Tigers

Out of affiliated baseball for three seasons, Cisnero finding his groove in the bullpen with Triple-A Toledo.

Fireballer Jose Cisnero could be a find for Tigers 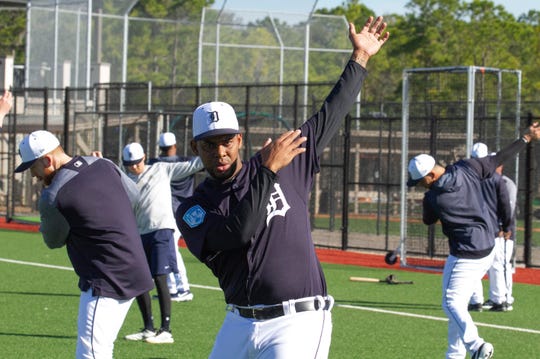 Reliever Jose Cisnero had a 1.86 ERA in nine spring-training appearances with the Tigers. He has yet to allow a run in 5.1 innings in Toledo, though he's walked eight. (Photo: Michael Wilson, Special to Detroit News)

Toledo, Ohio — If he can consistently straighten out his pitches, Jose Cisnero’s long and winding road could soon land him back in the big leagues with the Tigers.

After an impressive spring training with the Tigers, Cisnero, who turned 30 on Friday, is keeping crooked numbers off the scoreboard, although he’s been flirting with trouble, often bailed out by his high-90s fastball.

His first couple of weeks of play in Triple-A Toledo could be described as effectively wild: Through Sunday, he had not allowed a run in 5⅓ innings, striking out seven but walking eight.

It hasn’t been pretty at times, but those detoured relief outings seem fitting for Cisnero, who said recently he’s thrilled to be spending his birthday in a place like Norfolk, Va.

“I’m happy to be back,” he said, although he added getting back to the majors is firmly on his radar: “I’m working hard for that. For that, I am here.”

While Toledo teammates such as Daz Cameron, Beau Burrows and Willi Castro represent some of what the future Tigers might look like, the club gave Cisnero a non-roster invite to spring training to help out sooner rather than later.

Cisnero was once a bonus baby himself when he signed with Houston as an 18-year-old in 2007 — the day after the Tigers traded for Miguel Cabrera.

He worked his way through the Astros system and made the club in 2013, pitching 28 games in a bullpen anchored by Jose Veras before he was dealt to Detroit near the deadline that season.

After finishing 11 games in his rookie season, he was among Houston’s closer candidates going into 2014.

But after struggling through five games, it was determined Cisnero needed Tommy John surgery to repair the ulnar collateral ligament in his right elbow.

Cisnero was released in the offseason and picked up by Cincinnati for 2015. He was assigned to Double-A Pensacola, but was released after four games.

In 2016, he was in spring training with Arizona but cut loose before the season.

Over the next three years, Cisnero spent time in Mexico, Venezuela, the independent Canadian-American Association, and multiple leagues in the Dominican Republic.

Cisnero said he always believed he’d be back in the majors, and never gave up because of his two children.

This winter, he played in the Dominican winter league for Leones del Escogido. There he played for former Tigers pitcher Willie Blair, who served as pitching coach for Cisnero’s team — the same spot he holds for West Michigan, Detroit’s Low-A affiliate.

Bream said Tigers special assistant to the general manager Mike Russell and scout Ray Crone saw Cisnero, who struck out 20 batters in 19 innings, and moved quickly. The Tigers made him one of 12 non-roster invites, one of only two that were outside the organization last year.

In spring training, Cisnero dialed it up to 99 mph, said Bream, a former Tigers minor leaguer. In big league camp, Cisnero had a 1.86 ERA in nine appearances, striking out 12 and walking two.

Cisnero said he can throw up to 101, blending in a slider, occasional curve and a two-seamer he’s been struggling with, he said.

In his second outing of the season on April 6, Cisnero showed off the tools and the warts in his one inning, walking three Louisville batters to load the bases in the ninth, but also striking out three batters to earn the save.

Cisnero has two saves this season and earned his first win on Saturday, throwing two innings in a 9-5 win against Norfolk.

The Dominicano pitched three times against Boston in 2013, where Red Sox pitching coach Juan Nieves got a good look at him.

Now Cisnero’s pitching coach in Toledo, Nieves said he’s using the same tactics to prepare him for a return to the bigs that he did during that World Series season with Jon Lester, Andrew Miller and Koji Uehara.

“Being out of baseball for a little while, there’s still some things he has to work on to understand himself and understand who he is,” Nieves said. “We’ll know a couple months from now.”

Fittingly, Cisnero’s last major league game in 2014 was at Comerica Park against the Tigers. A return this summer would be another dream come true.

“I’m ready for that,” Cisnero said. “Whatever they say, I’ll be here.”