Tigers' Daniel Norris back in rotation, ready to unleash his full arsenal

Tigers manager Ron Gardenhire won't deploy an opener strategy, but if he did, Daniel Norris would be a candidate.

Tigers' Daniel Norris back in rotation, ready to unleash his full arsenal 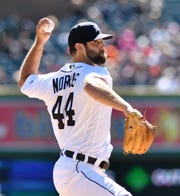 Detroit — He was nice about it, but the truth is, Daniel Norris is tired of talking about it.

His velocity, his role, his workload, his ups and downs — honestly, he’s out of words. He’d rather be expressing himself through deeds.

Norris, after three well-spaced relief appearances, is expected to make his first start of the season on Saturday against the White Sox. He’s going to get the first crack at replacing Matt Moore in the rotation.

Moore will have surgery on his right knee Wednesday. Norris has a chance to make a few starts in succession and finally establish a routine. But again, his sporadic workload  seemingly has bothered others (like the media) more than it’s bothered him.

“I’m just happy to pitch, anytime, anywhere,” he said. “I feel like I haven’t been throwing well, to be honest. But the way I felt at the end of spring training showed me I still have it. It’s going to come back.”

He’s pitched just 8.1 innings in the first 19 days of the season, but even that, he said, might end up being a blessing.

“Here’s the thing; I was probably going to be on an innings-count anyway this year,” said Norris, who was limited to 56 innings between the majors and minors last season because of groin surgery. “So this is working out pretty well, instead of being shut down toward the end of the year. If I’d logged a lot of innings early, I’d have to be shut down.

“I don’t think they planned it that way, but it’s working out OK. That’s the way I’m looking at it.”

Still, the incontrovertible downside of his sporadic workload is that he’s not been able to get into any kind of workable rhythm on the mound. And working out of the bullpen, he’s essentially been reduced to a two-pitch pitcher — fastball and slider. He’s thrown seven change-ups and six curveballs, total.

“Yeah, I don’t love it,” he said of his reduced mix. “I like to use all my pitches. Obviously, starting, I will be able to do that. It wasn’t a cognizant decision, you know. When I’m pitching out of the bullpen, that’s what they were calling (fastball and sliders).

Norris has been throwing all four of his pitches in his flat-ground and bullpen sessions. He said he thinks those two pitches are in better shape right now than his slider.

“I work on it every day and I feel pretty confident with everything,” he said. “I felt really good today. We’ve been working on a lot of different stuff, lot of mechanical stuff, and it felt really good. I hope I can take the way I felt today into the start and going forward.”

Against the Twins on Sunday, Norris scattered five hits through three scoreless innings, before giving up a home run to Eddie Rosario on a 3-2 fastball that registered at 87 mph. That was a revelatory moment for Norris, and he took it into his bullpen session Tuesday with pitching coach Rick Anderson.

“I was just sort of timid, trying to throw strikes,” he said. “Today, I go in the bullpen and just got back to not thinking about mechanics and just throwing. And Andy is looking at me like, ‘What the heck? I knew you had that in you, but that’s it right there.’”

Anderson has been trying to get Norris to slow down and not rush his pitches to the plate. And in bullpens, Norris has shown a very fluid, unrushed delivery. But when he gets into the game, especially coming in out of the bullpen, the adrenaline speeds him back up.

“I get into compete-mode and everything speeds up too much,” he said. “I need to be slower and let it explode, let my athleticism take over. That’s where the 95 (mph) comes and I can build off that. I wasn’t releasing the ball the other day, clearly. It felt real choppy and that’s just anxiousness building up.

“It’s a matter of slowing down. Even though the results were good, the process was terrible…I haven’t been great, but my bullpen today felt really good. I just have to take it into the game.”

What about using an opener?

Tigers manager Ron Gardenhire made it very clear before the game Tuesday that using an opener — a relief pitcher to start games and then give way to a longer-inning pitcher after an inning or two — wasn’t in the plans for the Tigers.

“When you have a situation like the Twins had last year, they had a rough starting rotation,” he said. “So it was easier for them to do something like that. Starting pitchers are routine-oriented. You let them go out and do their warm-up, do their stuff in the training room and they go out and start.

“If you start screwing around with veteran guys like we have like that, you got nothing. It’d be a terrible atmosphere. If you have the right people, yes, you could do some of those things.”

Gardenhire said the only starter he’d even think about using an opener with was Norris.

“He’d be fun to do that with,” he said. “Start somebody else and let them go a couple of innings and run Norris in there for four or five innings. But you have to have that set up. We have some veteran starters that don’t need to deal with that.

“I don’t want to get them out of their routine.”

The Tigers were nearly whole again Tuesday. Nick Castellanos (toe), Josh Harrison (shoulder) and Niko Goodrum (ill) were all back in the lineup. “It’s nice to write their names back in there,” Gardenhire said. “It’s a little easier to write a lineup when you actually have three guys on the bench who can play.”

… Castellanos was the DH and Goodrum played right field. Gardenhire said he wanted to give Castellanos another day to do his outfield work before putting him back on defense.

RHP Trevor Williams (1-0, 2.45), Pirates: He’s posted a sub-1 WHIP (0.98) in his three starts largely on the strength of his well-located 91.5-mph four-seam fastball. Opponents are just 3 for 31 with nine strikeouts off his fastballs. Right-handed hitters overall are hitting .128 against him.

RHP Spencer Turnbull (0-2, 4.80), Tigers: His fastball has betrayed him a bit over his first three starts. He’s thrown 140 four-seamers and 44 two-seamers, and opponents are hitting .390 combined (16 for 41). His cutter, conversely, hasn’t been hit at all. He’s thrown 43 of them and opponents are 0 for 10 on cutters put in play. He has eight strikeouts with it.