Boston – If you were busy last night watching Game 7s – and no jury would convict – maybe a few this-and-thats from the Tigers’ ultra-rare doubleheader sweep of the Red Sox escaped your notice.

► The injured list grew, again. Blaine Hardy, who has carved out a vital, multi-purpose role in the bullpen, was placed on the injured list with a left forearm strain between games, if you can believe it.

The last thing Hardy wanted, though, was to go on the 10-day injured list. He thinks this is something that could be cleared up in a few days.

“I said something (to pitching coach Rick Anderson and head athletic trainer Doug Teter),” Hardy said. “I said, ‘This sucks, but I probably won’t be able to go today.’ And they made the decision to put me on the IL.

“I understand where they’re coming from. Who knows how I will feel tomorrow? And with the doubleheader, we need to make sure the bullpen has enough arms in it.”

The Tigers had already called up right-hander Zac Reininger to be the 26th man for the second game of the doubleheader. But, they hastily needed a left-hander to replace Hardy. Jose Fernandez hopped aboard the Toledo shuttle and got to Fenway just before the second game started.

Both were thrust into high-leverage situations. With the Tigers clinging to a one-run lead in the eighth, Fernandez was called upon to face left-handed hitting Andrew Benintendi. He gave up a single on his first pitch.

Manager Ron Gardenhire then summoned Reininger to face Mookie Betts. He got him to pop out to second. And Reininger was back on the shuttle bound for Toledo after the game.

“That was not my intention,” Gardenhire said about using the two newcomers in such a tight spot. “I didn’t want to do that. But we did what we had to do to negotiate through their lineup.”

Hardy had similar forearm issues last year – flexor tendon – and it cost him most of the month of August.

“I don’t think it’s anything to worry about,” he said. “It’s just a matter of getting it back to where it needs to be. … We’re just being cautious. It’s early in the season and we’ve got plenty of arms that can come up and help us out – as you saw last night.

“We’ll take this day by day, but I have a feeling I will probably feel good in two or three days and then wait around for seven days after that.” 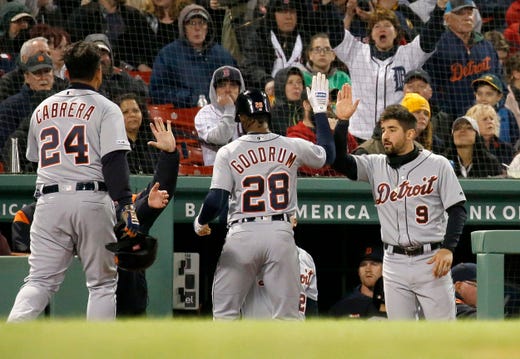 Detroit Tigers' Niko Goodrum (28) is congratulated at the dugout by Nicholas Castellanos (9) after scoring on a Brandon Dixon double with Miguel Cabrera (24) and Jeimer Candelario during the fourth inning of Tuesday's game against the Boston Red Sox at Fenway Park. The Tigers won, 4-2, to complete the doubleheader sweep. Mary Schwalm, AP
Fullscreen 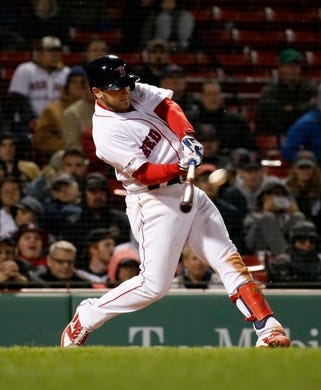 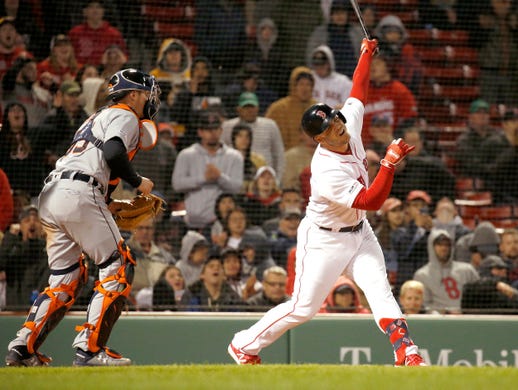 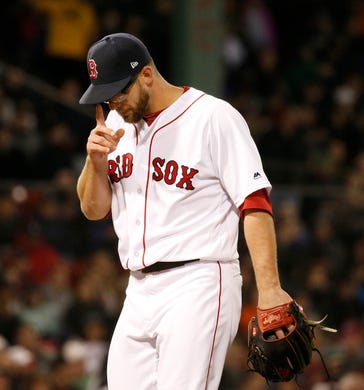 Red Sox relief pitcher Marcus Walden (64) pushes up his hat as he leaves the game after the final out during the fourth inning. Mary Schwalm, AP
Fullscreen 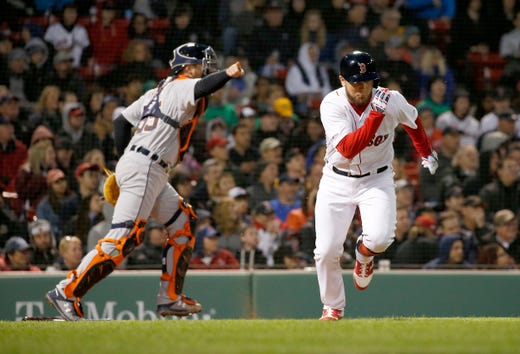 Boston's Michael Chavis, right, sprints down the first base line to reach on a single as Tigers catcher John Hicks  directs the throw during the second inning. Mary Schwalm, AP
Fullscreen 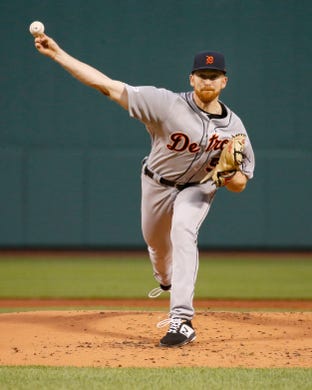 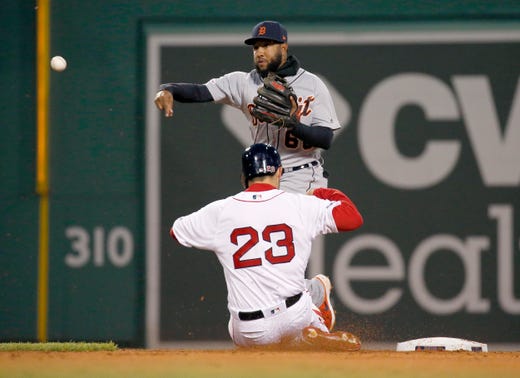 Tigers shortstop Ronny Rodriguez makes the force at second on Boston's Michael Chavis (23) and the throw to first for the double play during the second inning. Mary Schwalm, AP
Fullscreen 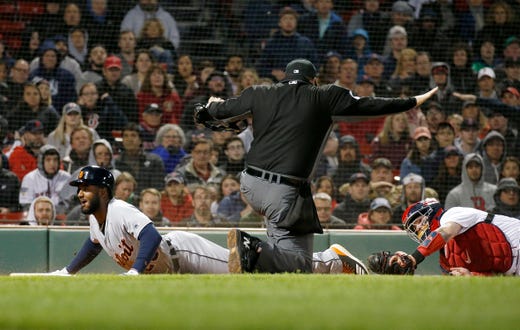 Detroit's Niko Goodrum (28) smiles as he slides in safely ahead of the tag from Red Sox catcher Christian Vazquez (7) of a double by Brandon Dixon during the fourth inning. Mary Schwalm, AP
Fullscreen 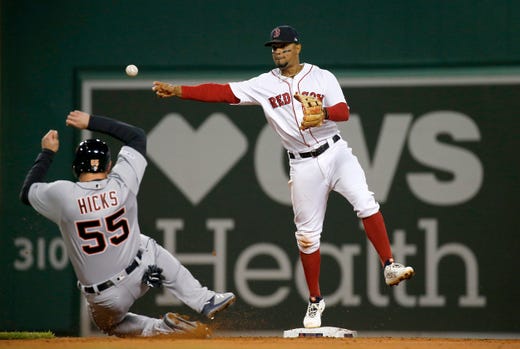 Red Sox shortstop Xander Bogaerts gets the force at second on Detroit's John Hicks (55) as he makes the throw to first for the double play during the third inning. Mary Schwalm, AP
Fullscreen 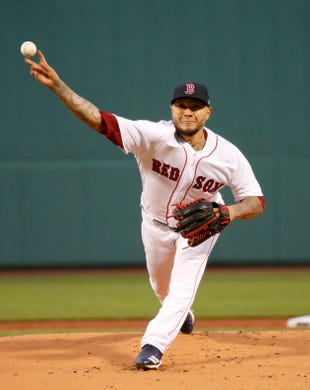 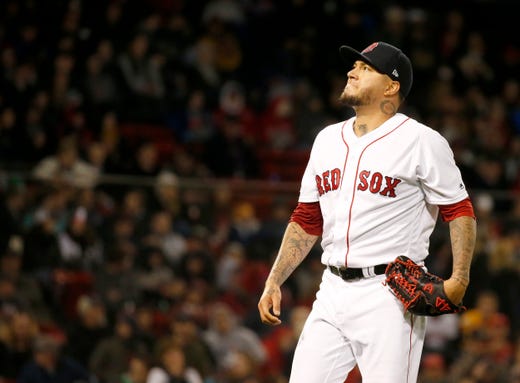 Red Sox starting pitcher Hector Velazquez looks up as he is pulled from the game during the fourth inning. Mary Schwalm, AP
Fullscreen

► Miguel Cabrera has pushed his batting average to .280, getting three hits, including a double in the two games. He has extended his hitting streak to nine games, which, surprisingly, is the longest hitting streak he’s put together since 2016.

► How about Josh Harrison. He told The Detroit News on Monday that he felt like he had a breakthrough, that he’d figured something out in his set-up and he expected to break out of his season-long slump soon.

Earlier on Monday, Harrison had been informed that he was being dropped out of the leadoff spot, and moved down to the seven hole. He said, no problem, he understood.

Then he went out and collected four hits, two in each game, including two doubles.

“He’s been working really hard,” Gardenhire said. “And he did make another adjustment, where he wasn’t tying himself up. You saw it today, he was freer with the bat going through the zone. Good for him and good for us.”

► Jeimer Candelario has moved into the leadoff spot for the time being. He responded with three hits in the second game. He is now 10 for 19 with two walks in four starts hitting at the top of the order.

► Brandon Dixon has made a strong first impression, at least with his bat. He’s made two starts now and has five hits. He got three hits in the nightcap, including a three-run double. But he keeps getting thrown out on the bases.

He was thrown out at second in his first start, then twice Tuesday night. But nobody is mad at him.

The Tigers had four runners thrown out at the bases in the doubleheader, including two at home plate. J.D. Martinez threw out Nick Castellanos at the plate in the first game trying to tag from third on a line drive to right field.

In the nightcap, Betts threw a one-hop seed to the plate to get John Hicks trying to score from second on a single.

The Tigers have had 13 runners thrown out on the bases this season, four at the plate. 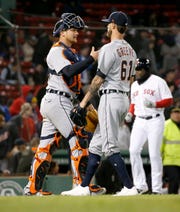 ► One comical moment from the second game. The Red Sox had two on and two outs in the seventh, with left-handed hitting Rafael Devers coming up. Even though Gardenhire knew Boston manager Alex Cora would counter with right-handed Steve Pearce, he still wanted lefty Daniel Stumpf.

And he signaled with his left hand. But first base umpire Alfonso Marquez raised his right arm toward the Tigers bullpen. So righty Reed Garrett came trotting out.

“I look up and here’s my righty almost on the mound,” Gardenhire said with a laugh. “And I just said, ‘I want the lefty.’ And (Garrett) looked around like, ‘Who told me to come in?’ Well, the umpire told him. I told him, ‘I will see you in a minute.’”

► Speaking of mixed messages, there was a failure to communicate in the first inning of Game 2 that led Candelario to be thrown out at second trying to steal. It seemed odd for the Tigers to send him in the first inning with Nick Castellanos and Miguel Cabrera coming up.

“We had a miscommunication with our signs,” Gardenhire said. “That’s on me. I was actually not giving a sign, but apparently I did. We didn’t want Candy running there with those two big guys coming up.”

► The bullpen has been doing incredible things, not the least of which is Shane Greene’s MLB-best 11 saves. Buck Farmer pitched another scoreless inning. Going back to last September, he has allowed just one run in 18 innings. Victor Alcantara, who has been getting a lot of the late-inning set-up work lately, got a big, inning-ending double-play from Betts in the first game. And Stumpf continues to get important outs late in the game – none more important than his strikeout of Pearce to end the seventh in the nightcap.