Jordan Zimmermann, who had Tommy John surgery 10 years ago, will undergo tests on his elbow Friday after lasting three innings in Thursday's 7-3 loss. 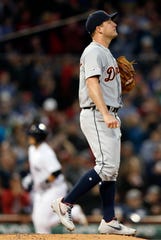 The same day that two of their top pitching prospects — Casey Mize and Gregory Soto — were hastily promoted to Double-A Erie, the current ace of staff Jordan Zimmermann was forced out of the game after three innings because of right elbow discomfort.

"He didn't have any issues prior," a somewhat exasperated manager Ron Gardenhire said after the Red Sox gained a split of the series with a 7-3 win. "It got him tonight. He tried to pitch with it. Not good.

"He'll get tested further in Chicago tomorrow and we'll go from there."

He is the third member of the Tigers rotation to go down — before the end of April. Matt Moore (knee) and Michael Fulmer (Tommy John surgery) are already out for the season.

"I just can't put it into words," second baseman Josh Harrison said. "Just kind of dumbfounded...You wouldn't think this in your wildest dreams or wish it on your worst enemy. But, unfortunately, that's the game of baseball.

"For us, we want to be healthy, that's all you can ask for. And now we've taken a couple of tough blows. We have to rely on each other now, it's all we got. Whoever steps in, it's next man up."

Zimmermann has been a starkly different pitcher in his last four starts than he was in his first two. For the fourth straight start, he allowed five runs. After allowing just one run over 13.2 innings in his first two starts, he's allowed 19 in 16.2 innings since.

"I had no idea," catcher John Hicks said when asked if he knew before the game that Zimmermann was hurting. "His fastball was still 90-91."

Hicks was asked about the flatness of his slider, which Red Sox second baseman Michael Chavis hit over the Green Monster in the second inning.

More: Q&A with Dave Dombrowski: 'It's amazing' Tigers never won a title in his tenure 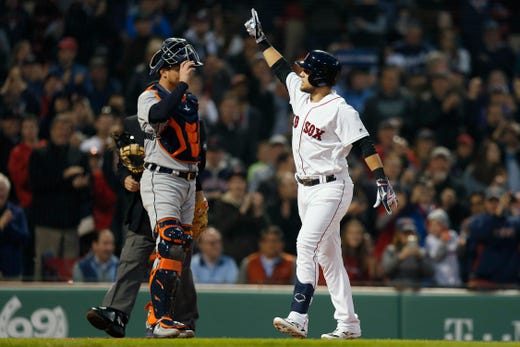 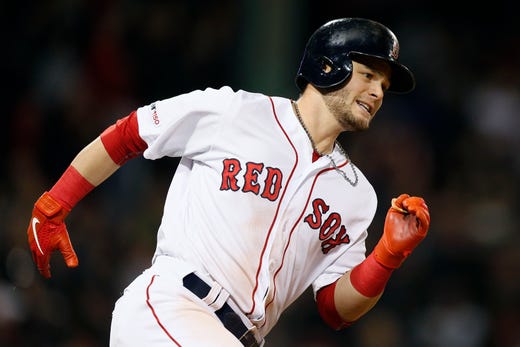 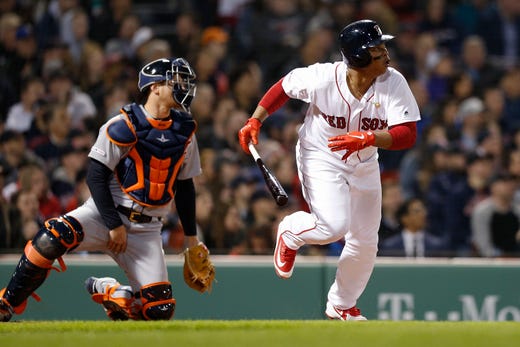 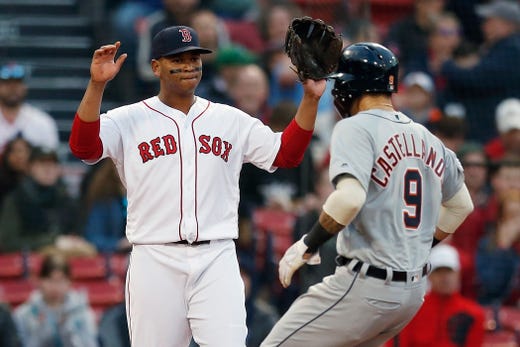 Boston's Rafael Devers holds up his hands as Detroit's Nicholas Castellanos (9) advances to third base on a fly out by Miguel Cabrera during the first inning. Michael Dwyer, AP
Fullscreen 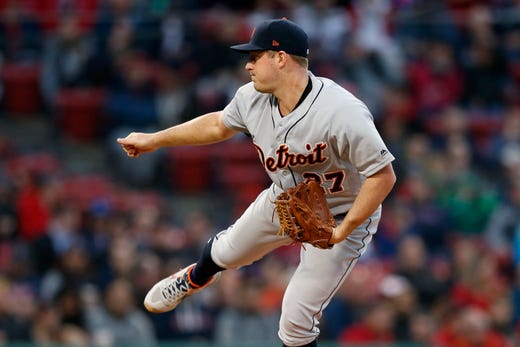 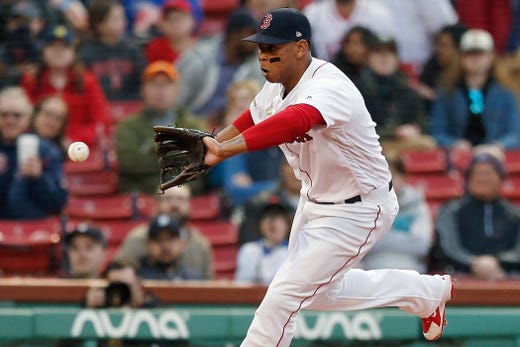 Boston's Jackie Bradley Jr. takes the field during the at the start of the game against the Tigers. Michael Dwyer, AP
Fullscreen 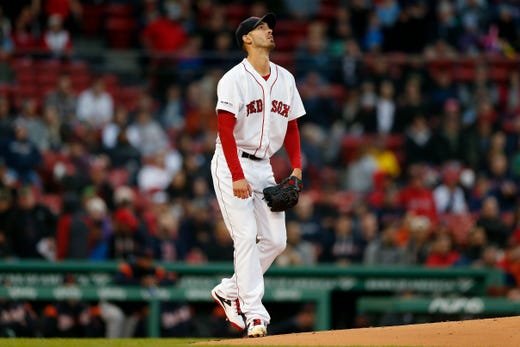 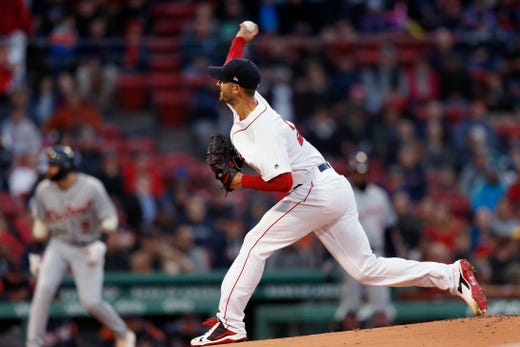 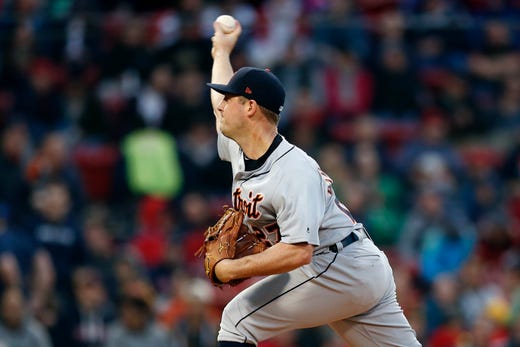 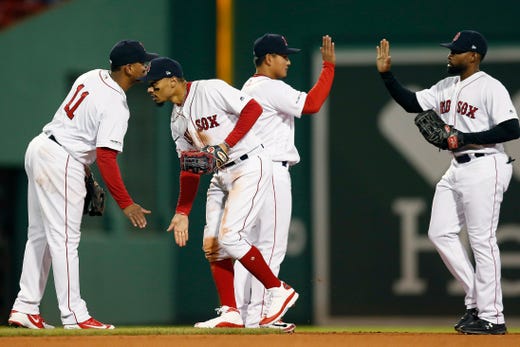 His sudden inability to command any of his pitches, though, was an indication that something was off — be it physical or mechanical. He walked three hitters in his three innings Thursday and he’s walked eight in his last three starts (12.1 innings). That after walking just three in his first three starts (18 innings).

"It's not a great scenario," Gardenhire said. "But it happens. We just have to keep figuring out ways to get through it."

Left-hander Ryan Carpenter was pulled from his start at Triple-A Toledo on Thursday. Initially, that was to make a spot start on Saturday in Chicago. With Zimmermann out, it could be a longer stay.

"There will be a roster move," Gardenhire said. "But we will figure all that out when we get to Chicago."

Zimmermann's early exit forced Gardenhire to further tax an already beat-up bullpen — which also has its injury concerns. Blaine Hardy is on the injured list with a forearm strain.

"We have a lot of people beat up right now," Gardenhire said. "Doubleheaders seem to do that. We played four games in three days, that's a lot of baseball. And when your bullpen has to do a lot of pitching like this, then it gets tough.

"It's just frustrating right now. We played two really good games here and the last couple got away from us."

The Tigers briefly held a 3-2 lead in this game. That was in the top of the third inning when JaCoby Jones, who was in a 1-for-20 spin at the time, doubled and scored on a single by Jeimer Candelario.

Nick Castellanos, who had not hit a home run in his first 90 plate appearances this season, finally broke the seal. He did it with a slicing, 320-foot drive that hit off the Pesky Pole in the right-field corner.

"Nick is just Nick — he just goes out there and plays and swings," Gardenhire said when asked if he thought the home run drought was weighing on Castellanos. "He was happy, but more for the team than anything else. Nick is going to hit a lot of home runs in his career."

Miguel Cabrera already has — 465 of them. But he hasn't hit one in 103 plate appearances this season. He went 0-for-4, ending his hitting streak at 10 games.

That was all the damage they could muster against former Tiger Rick Porcello, who entered the game with an ERA of 8.47. Porcello soldiered through six innings, allowing six hits and two walks. He had five strikeouts.

"The split is not what we wanted," Harrison said. "But at the end of the day, we didn't lose the series. We're right back where we were."