A Q&A with Dave Dombrowski: 'It's amazing' Tigers never won a title in his tenure

A Q&A with Dave Dombrowski: 'It's amazing' Tigers never won a title in his tenure 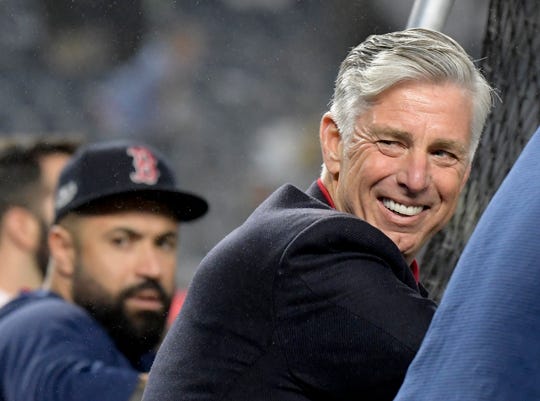 Boston — It was around 3 p.m. Wednesday afternoon. A tall, slender, silver-haired figure walked slowly down the lower-deck grandstand along the third-base side. If you didn’t know better, you’d think, “There is a man taking the time to stop and smell the roses.”

He said hello to the ushers and stadium workers, walked down through the gate next to the visitors’ dugout and onto the field where his injured second baseman, Dustin Pedroia, was taking some early batting practice.

Dave Dombrowski certainly has the air of a man at peace these days. He seemingly hasn’t aged a day since that traumatic August afternoon in 2015 when he was hastily relieved of his duties by Tigers owner Mike Ilitch.

More: J.D. Martinez, Red Sox get their payback with 11-4 thrashing of Tigers

And why not? He’s allowed to bask at bit in the afterglow of the Red Sox World Series championship. It was just his third year in charge of the storied franchise, but it had been a helluva wait for him personally. Twenty-two years of toil and heartbreak and near-misses lay between his first championship with the Florida Marlins in 1997 and his triumph with the Red Sox last October.

The in-between years, of course, were his Tigers years and that’s where the bulk of the heartbreak and near-misses took place. On a gorgeous Wednesday afternoon, seated in the expensive Fenway Park seats next to the Red Sox dugout, Dombrowski sat with Detroit News’ reporter Chris McCosky and talked candidly about those years, how the bittersweet mix of joy and disappointment shaped him, about his not-always-flattering reputation and about how redemption or validation wasn’t any part of his motivation.

Know this: Dave Dombrowski isn’t apologizing for any of it. Nor should he. 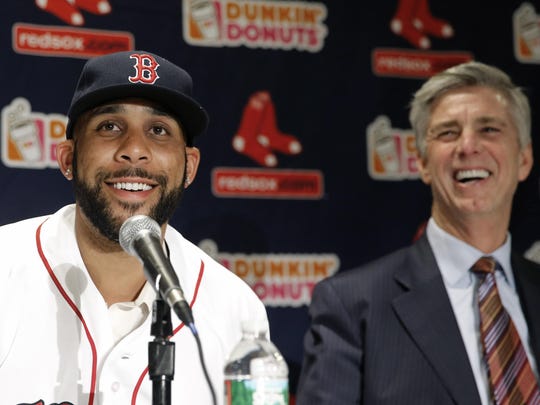 ►Q. What did winning that championship last year mean for you, personally. Especially after all the time and near-misses you’ve had in between?

►A. No question you are happy for everybody that’s involved. The fans, the people in your front office, the ownership and on down. From a personal perspective, it’s a wonderful feeling. It’s the best professional feeling you can possibly have. It’d been a long time coming. We’d been so close so many times. To finally be in a position where you get over that finish line and enjoy it — you let go. You let go.

►Q. When you won your first World Series championship with the Marlins back in 1997, you were younger and maybe you didn’t understand or fully appreciate the magnitude of what you had accomplished. Does this one feel a little better, perhaps mean a little more, just from all the adversity you’d come through?

►A. Just in one sense: In 1997, it was just the fifth year the Marlins franchise was in existence. But you know a lot of people and you hear the stories of people who are in the game a long time and never been a part of a championship organization. Great players, some of the greatest in history, people in organizations. And then it happened pretty quick for us there in Florida.

At that point, I was 40-41 years old and you don’t realize how long it may take to get there again. Because you think it’s going to happen relatively soon. But then we got so close so many times. 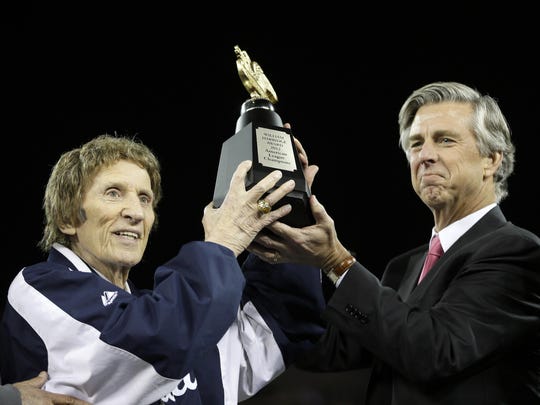 ►A.​​​​​​​ Just think back to those Tigers teams. It’s amazing that club never won a championship. As good as that talent was. As good as that club was year in and year out. You kind of shake your head and say you really can’t believe that we weren’t able to do that.

►Q. I know you’ve done this: If you try to go back and analyze what actually happened, or why it happened, you will make yourself crazy. You brought in good relievers. You brought in good people. And then there were always situations — the long delays before both World Series appearances. What happened in this park in 2013. Who can draw that up? Who can script that?

►A.​​​​​​​ You can’t. That’s the difficulty. You do everything you can to put together a good club. And we got to the World Series a couple of times and you could make the argument that both of those clubs were favorites. Now I am here and I’m part of this (Boston) organization and ironically, I’ve seen the David Ortiz clip, I mean it has to be about a thousand times since I’ve been here. And out talking to people from here, and they are sincere, they say, ‘We can’t believe we beat you guys.’

►Q. Still hurts, huh? My former colleague Lynn Henning said that 2013 American League Championship series will go down as one of the most painful events in Detroit sports history — and in that market, that’s saying something.

►A.​​​​​​​ That team was so good. The pitching staff we had. Just the overall aspect of the talent on that team. I know we had a couple of injuries, but everybody has those things at that time of year. But it just shows how hard it is to win a championship. My first two years here, we won the division and got knocked off in the first round.

You start to wonder when it’s going to happen. And it finally did. 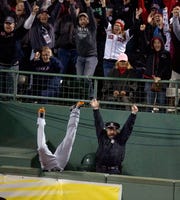 ►Q. That why I asked at the beginning, about how much you must have cherished that moment last October. Because you understand more than most, you can put together the best team ever assembled and there can be something that trips it up.

►A.​​​​​​​ So many things. I mean at that point, it really does get beyond your control. You can be in a position where a guy has a great series against you. Sometimes your great players don’t have a good performance in a particular year. Sometimes a ball falls in that you know just shouldn’t fall in. Sometimes there are injuries. That’s what makes it so hard. And that’s what makes it so special when you do finally win.

►Q. Switching gears a bit, there is a segment of the media and the baseball fan base that tries to devalue your accomplishments, saying that you just go to the teams that spend the most money and buy the best players. Is that a fair assessment?

►A.​​​​​​​ It’s amazing. Of course you hear that. But you go where your career takes you. People forget the first half of my career as a general manager when we never had a payroll in the top half of Major League Baseball. When I was with the Montreal Expos, we had one of the lowest payrolls in baseball. Then we started an expansion team in Florida and built that up.

That’s how we operated back then and we had some really good teams.

►Q. People also forget that the 2003 Marlins championship team, which won the year after you took over the Tigers, was built around players you brought to the organization — Miguel Cabrera, Josh Beckett, Mike Lowell, Carl Pavano, Derrek Lee and others.

►A.​​​​​​​ When I went to Detroit, we were in a different spot. Still, people forget, again, when we started, we did not have a good team. There were a lot of trades and a lot of free-agent signings. We did all that and when we got close, we were an organization that was trying to win on a yearly basis.

And that’s what was different in Detroit than it is here in Boston. In Detroit, we knew we were making the sacrifices for now. Because we weren’t investing heavily in the future. That’s just where we were as an organization.

►Q. How do you view the perception that you mortgaged the future in Detroit by trying to bring owner Mike Ilitch a World Series championship?

►A.​​​​​​​ That’s what people say and that’s the way it goes. But where I have been, we’ve been tasked with trying to win on a yearly basis for a long time. Which is what you are trying to do. You do what you are supposed to do.

►Q. Do you expect to hear some of the same criticisms here in Boston?

I know what’s in our system now, it just hasn’t come to fruition. But on Tuesday, you saw young second baseman Michael Chavis. You saw those young pitchers Darwinzon Hernandez and Travis Lakin. We’ve got more guys coming, but at this point they’re not getting much attention because they are still in A-ball. 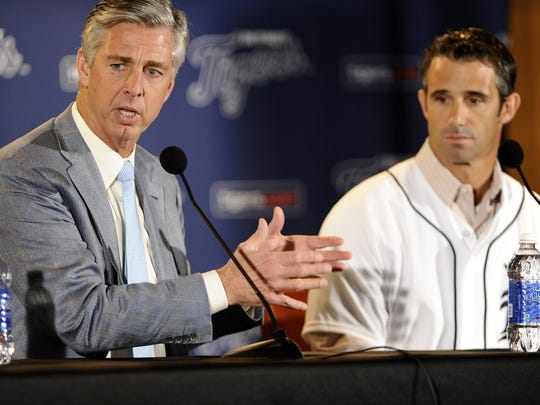 ►Q. Kind of odd, though, to be criticized for going all in on trying to bring a city a championship. You shouldn’t have to apologize for that.

►A.​​​​​​​ No. In Detroit, unfortunately, we didn’t win a world championship. But we came close and we knew what we were doing, from the ownership on down.

►Q. Will you look back on the Detroit chapter of your career with fondness or regret?

►Q. From 119 losses to an American League pennant in three years. Four straight Central Division titles. There’s a good chance history will look back more fondly on your years in Detroit than the current view.

►A.​​​​​​​ The ability to compete for a championship every year. The Hall-of-Fame caliber players we had. Three million fans every year. The only shortcoming is we didn’t win a world championship. We went to the World Series twice. Won some division titles.

I think, unfortunately, we will probably be remembered as one of the best groups of players that didn’t win a championship.