The Tigers could have as many as 18 Rule 5 eligible players this winter, and Al Avila guessed that 10 of them would be protected

The Tigers general manager has had his scout hat on this past week — traveling from Detroit to Dallas to Orlando, back to Dallas, to Nashville, Trenton, N.J., and, for the first three days of this week — Altoona, Pa.

He’s already seen the top 10 prospects in the June amateur draft and by the time he heads back to Detroit on Thursday, he will have seen three of his top pitching prospects — Casey Mize, who was to make his Double-A debut Monday, Alex Faedo and Matt Manning in successive days.

“This is what I do at this time every year, always have,” Avila said. “This gives me good perspective for the draft and before I get back, I will have gotten a good view of the top guys in our organization.”

Still, he talks with manager Ron Gardenhire every day and he is fully aware there is a mini-crisis with the club's starting rotation. Three-fifths of the rotation the Tigers started the year with is on the injured list — Matt Moore and Michael Fulmer for the season, and most recently, Jordan Zimmermann.

Although the Tigers are hopeful Zimmermann can return in three to four weeks, Avila is already building contingency plans in the event the recovery time is longer.

“From a free agent perspective, there’s not much out there,” he said. “We have to keep our eye on the waiver wire and on guys in the minor leagues who have opt-out clauses.”

Gio Gonzalez was one such player with an opt-out, but he signed with the contending Brewers. One unsigned free agent that Avila mentioned in passing was 37-year-old James Shields. But the last three years, Shields has an ERA of 5.17 and a WHIP of 1.44.

Dallas Keuchel is likely out of the Tigers’ price range.

It is more realistic to expect the replacement to come from within the organization.

“Whether Jordan would’ve gotten hurt or not, we look at the waiver wire every day,” Avila said. “But we don’t really have a lot of options. One option right now would be Ryan Carpenter, who had his best game since he’s been with us last night (Sunday).

“He pitched outstanding. So that was encouraging.”

Carpenter, whose spot start with the Tigers was snowed out in Chicago on Saturday, pitched seven scoreless innings at Gwinnett Sunday, allowing just four hits with five strikeouts.

“And if Kyle Funkhouser ever got his stuff together, he’d definitely be the guy to bring up,” Avila said.

Funkhouser, the No. 11 prospect in the Tigers system according to MLB.com, didn’t survive the first inning of his last two starts — allowing 11 runs (five earned), five hits and six walks in just 1.1 innings total.

“I think we have him back on track now,” Avila said. “Those are the two guys we’re looking at, at this point. Otherwise, we could go with a starter-bullpen guy and see where it goes.” 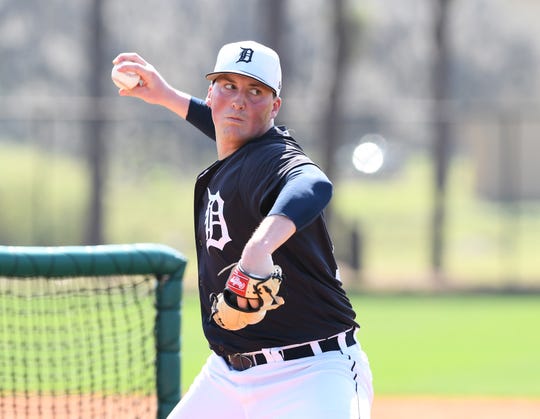 That, as has been discussed the last couple of days by Gardenhire, would be Blaine Hardy, who is eligible to come off the injured list Tuesday.

The Tigers can create a spot on the 40-man roster by transferring Moore to the 60-day injured list. And, obviously, if Zimmermann were to be out for the year, that would create a second spot. But those spots are going to be precious commodities next offseason.

“We’ll probably have to protect 10 guys,” Avila said. “There’s going to be some really touch choices to be made. But at the end of the day, we will have all the numbers as far as what kind of year they all had. We might have to take some guys off and put some other guys on.”

“In some cases, there are easy decisions,” Avila said. “In some cases, they are going to be very difficult. But what’s good about our organization right now, come this winter, we will get to the point where we won’t protect a player, or we will dump a player off our roster to protect other guys, and we will start losing players in Rule 5.

“That tells you our talent is getting deeper through the system. It tells you we are making progress.”

►Ross, Tigers: He’s coming off a laboring start in Boston (seven hits, three walks, four runs, 98 pitches in five innings). His three-pitch mix – cutter, four-seam, slider – has a velocity range of just 84-89 mph. Still, when he can spot the fastballs in the zone, his slider is effective (.182 opponents average).

►Velasquez, Phillies: Has a lively four-seam fastball (94 mph) which opponents are hitting .161 against and swinging and missing 23 percent of the time. His slider has gotten him into trouble thus far, though -- .308, .692 slugging percentage.