He’s not a touted first-rounder or a prized acquisition, but Turnbull might be as promising as any of the Tigers’ talented young arms 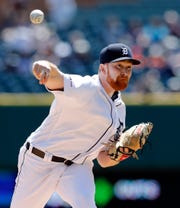 Detroit — He’s not a touted first-rounder or a prized acquisition, not the name everyone’s been craving to see. But in the rush to embrace the next batch of pitching prospects, don’t overlook the unexpected.

Right now, Spencer Turnbull might be as promising as any of the Tigers’ talented young arms, and before you start rattling off all their names, consider what Turnbull is doing, and how he’s doing it. The rookie right-hander was powerful again Sunday, his fourth consecutive start allowing one earned run or less, as the Tigers beat the Royals 5-2 in 10 innings.

Turnbull is wild and mild at the same time, prone to losing control of his pitches but not his composure. He just lowered his ERA to 2.31, which ranks eighth in the majors among qualifying pitchers. His record (2-2) is immaterial and his material is impressive. With seven strikeouts Sunday, he has 38 in 39 innings. He also leads the majors with five hit-batsmen and is tied for the team lead with 14 walks.

Some call it effectively wild. Others might suggest it’s too small a sample size to fairly judge him. But this is not some guy plucked from the heap by a rebuilding team. This is the type of guy the Tigers absolutely need to accelerate the process. He was their second-round pick in 2014 out of Alabama and has a sturdy 6-foot-3, 215-pound frame and a lively mid-90s fastball.

Before the season, Turnbull was the Tigers’ 19th-ranked prospect. At 26, it was time to make a move, and after several years of nagging injuries, he’s made a move.

“He’s pitching like a first-rounder,” GM Al Avila said. “The thing is, he’s always had great stuff. It’s taken him a while to get here because he’s always had something physical, nothing major, that held him back.”

Nothing major, but enough to keep him in the minors. Now, along with lefty Matthew Boyd, Turnbull has anchored a starting rotation shredded by injury, and helped keep the Tigers (15-16) floating around .500.

“I think he’s as good as you’re gonna get,” Avila said. “We’ve got guys in the minor leagues that we love and we think they’re great. But quite frankly, I don’t know if any of them are better than him. He’s legit.”

He’s different too, and not just because he has red hair and a red beard. Ron Gardenhire says Turnbull is “way out there” and “marches to a different drummer,” in a good way. He’s more likely to rattle opposing hitters than get rattled. He throws hard, he throws inside and he challenges batters.

The Royals didn’t get many good swings, one day after dropping 15 runs on the Tigers. In his previous two outings, Turnbull worked in and out of trouble to beat the Phillies and Red Sox.

“The way the ball came out of his hand, you could see those hitters over there were uncomfortable with him pitching,” Gardenhire said. “That’s because his ball goes all over the place and he’s not afraid to pitch inside. He’s a different cat and I don’t mind that. A lot of pitchers have confidence, and he has confidence, but he marches to a different drummer.”

It's more off-beat than noticeably upbeat, near as I can tell.

“He’ll say things and you have to turn and say, ‘What’d you just say? Oh never mind,’" Gardenhire said. “He’s a good dude, a really nice kid, he just has his different little mannerisms. Everyone kind of stares at him, and then we walk the other way.” 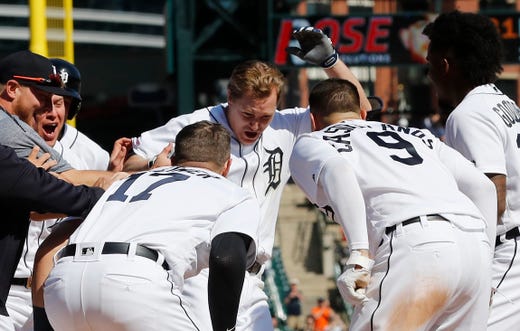 Detroit's Brandon Dixon is greeted at home plate after his three-run home run during the 10th inning against the Kansas City Royals on Sunday at Comerica Park in Detroit. The Tigers won, 5-2. Carlos Osorio, AP
Fullscreen 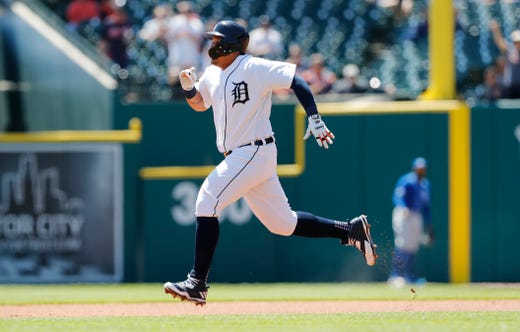 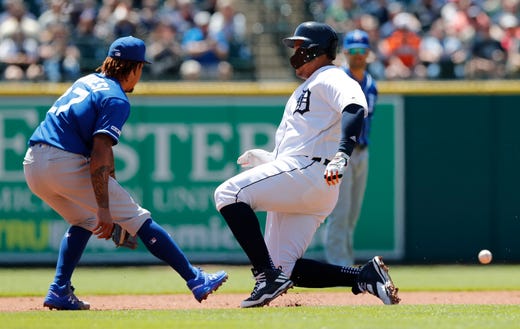 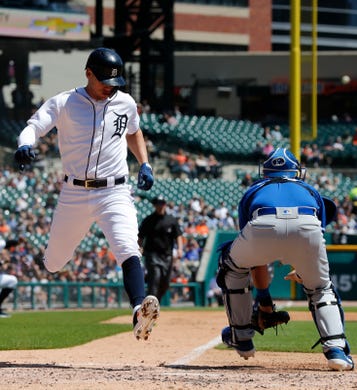 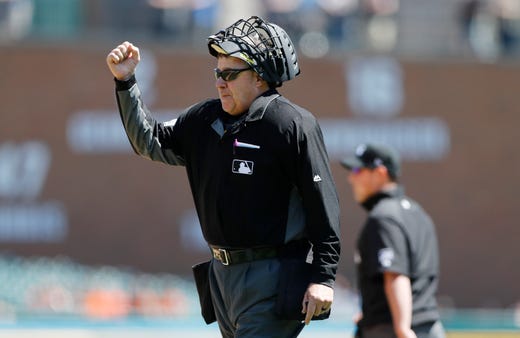 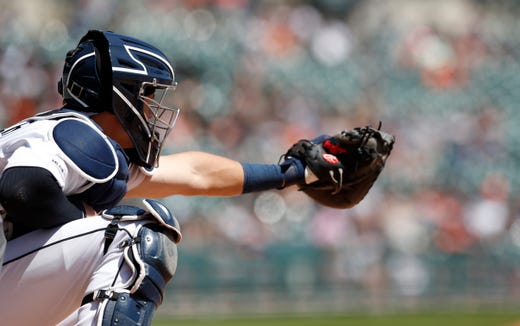 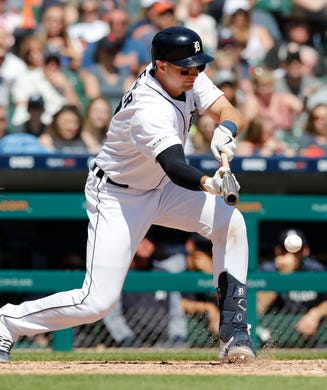 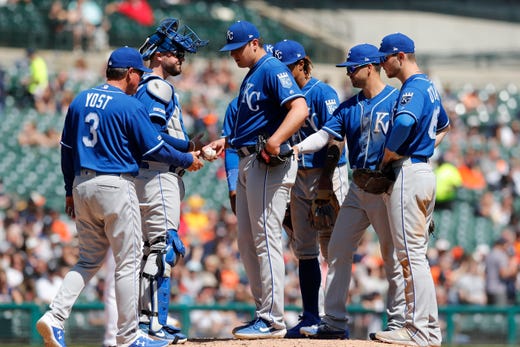 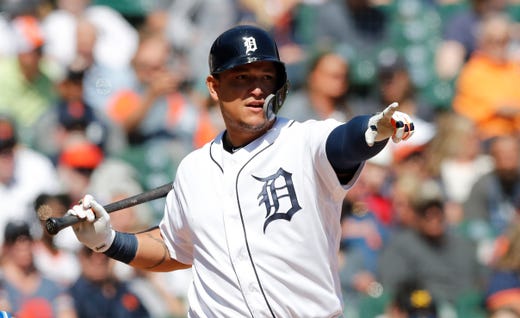 Detroit's Miguel Cabrera points to the first base umpire for a call during the seventh inning. Carlos Osorio, AP
Fullscreen 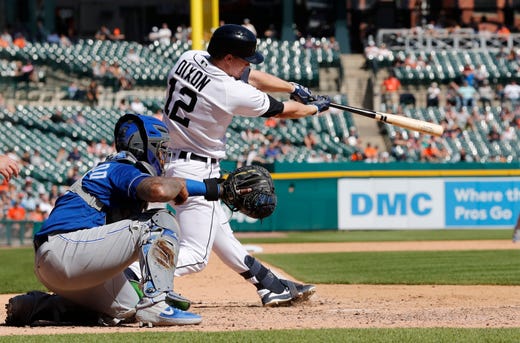 Turnbull does have a serious air about him, not cocky or loud, but a mild-mannered self-assuredness. Ask him about some of his advanced numbers — opponents are hitting .042 against his slider — and he’s not awed.

Ask him about his purported quirks and mannerisms, and he’s not really sure how to explain it.

“I believe in myself, so I’m not gonna say I’m surprised to see (his success),” Turnbull said. “I’ve never been just like everybody else. Maybe you’re not supposed to fit in, maybe everybody’s supposed to be a little different. Everybody’s got their little quirks, I may have some that are more noticeable, I don’t know. That’s just part of me being me.”

Him being him isn’t something many expected to see this season. But this is the fickle nature of rebuilds, where not all top prospects pan out, and not all next-tier prospects disappear. And some guys not even considered prospects can have their moments, like waiver pickup Brandon Dixon, who slugged the three-run, walk-off homer Sunday.

The Tigers are deep in young starting pitching and Avila needs several of them eventually to emerge, either in Detroit or as trade chips for much-needed hitting. It’s just hard to predict. At one point, Michael Fulmer (out for the year after elbow surgery) and Daniel Norris (working his way back to form) were the prime names. For the moment, it’s Boyd and Turnbull.

The distance between a big name and a no-name can be agonizingly narrow in baseball, sometimes as short as the length of a ligament. The Tigers are counting on some big-name prospects, sure, but they’ll take a lively, promising arm anywhere they can find it.