Top of MLB Draft is hitter-heavy, but Tigers keeping options open at No. 5

Unlike recent years, position players are projected to be taken with the first six picks in the MLB Draft on Monday.

Top of MLB Draft is hitter-heavy, but Tigers keeping options open at No. 5 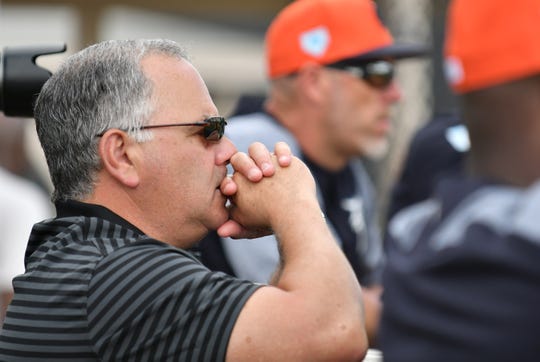 Atlanta — The Tigers’ biggest organizational need is hitting. They’ve spent the past four years drafting and acquiring pitching prospects. Seven of their top 10 prospects, and 15 of their top 28, are pitchers.

Their stock of hitters is paper thin. So, obviously, with the fifth overall pick in the Major League Baseball amateur draft Monday, the Tigers are taking a hitter, right?

Probably, but it’s not guaranteed.

“I’ve heard all the talk about bats and I understand,”Tigers director of amateur scouting Scott Pleis said in a teleconference Friday. “But it’s very important to get the right guy. You don’t want to draft by need and pass on somebody who is quite a bit better — just because you think you need one thing or another.

More: Tigers on pace for worst attendance since 1996; June tickets start at $9

“We’re going to take the best guy who is going to give us the best impact. That’s how we’ve done it for a long time and that’s how we will keep doing it.”

As it happens, though, unlike recent years, the top of the draft is hitter heavy. Position players are projected to be taken with the first six picks on Monday.

“There could be multiple guys (available),” Pleis said. “I think it’s really good where we’re at, with the first pick for sure.

"We’re going to have some options and I anticipate some really good conversations about two maybe three guys that could get to us, guys that we really like.”

The one pitcher that a consensus of draft experts has projected to go in the top seven is left-hander Nick Lodolo from Texas Christian.

“You are still looking for the best player,” Pleis said when asked if there was a general preference of college prospect over a high-school prospect. “Obviously, everybody likes the guy that’s going to get there really fast and be the guy we think he’s going to be.

“But at the end of the day, the guy has to be the player we think he is. If we have to wait a little longer for it, we will wait.”

The Tigers, after the No. 5 pick, have picks Nos. 47, 83 and 112 in rounds two through four. Pleis said he thinks there is enough depth in this draft to sustain the Tigers even beyond those rounds.

“I don’t think it’s the deepest draft I’ve seen but it’s a good draft,” he said. “I’m very confident we’ll be fine in the second, third, fourth and fifth rounds. There’s good players out there. It’s just the unknown. You are sitting there with a block of guys you want to get to you, and sometimes they don’t.

“But the depth is fine. There will be guys that get to us that we’re going to like.”

The first round will begin at 7 p.m. Monday, with the first two rounds. Rounds 3-10 are Tuesday, and rounds 11-40 on Wednesday.