Matthew Boyd allowed three home runs in a game for the second time since 2016 in Friday's 7-6 loss to the Indians.

Cleveland — At this point in the season, when you are 19 games under .500 and 4-13 this month, maybe you do accept the occasional moral victory. 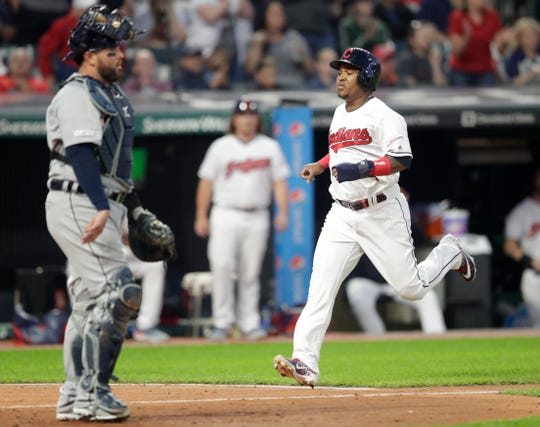 The Tigers put up very little resistance against the Indians last weekend at Comerica Park, getting swept in three games by a combined score of 25-6. Truth be told, they’ve offered very little pushback against them for two years.

But Friday night when the Indians kicked dirt on them at Progressive Field, the Tigers finally punched back. Problem was — they didn’t step on their neck to make sure they stayed down.

"It was good baseball, exciting baseball," manager Ron Gardenhire said after the 7-6 loss. "We did a lot of good things out there. Unfortunately, we couldn't stop them when we needed to."

The Tigers built a 5-2 lead. They got home runs from Brandon Dixon and Christin Stewart and KO'd starter Trevor Bauer in the fifth inning. And they had their ace Matthew Boyd on the mound.

But, just like Wednesday in Pittsburgh, the lead evaporated. In this case, it was vaporized.

"Hats off to them," Boyd said. "I made a few mistakes and instead of hitting a single or popping it up, they hit the mistakes out tonight. Unfortunately I let them back in the game when our offense did such a great job against a really good pitcher.

The Indians clubbed three home runs off Boyd, eventually drawing even, 5-5, in the sixth inning. The Indians broke the tie with two runs in the bottom of the eighth off reliever Joe Jimenez.

Jason Kipnis' RBI triple off the top of the fence in right-center field broke gave the Indians a 6-5 lead. It was ruled a home run initially. After video review, which showed the ball hit off the yellow padding atop the wall, it was downgraded to a triple.

Kipnis scored the vital insurance run on a sacrifice fly by Jake Bauers against lefty reliever Daniel Stumpf, who replaced Jimenez after three hitters. Kipnis just slid in ahead of a strong throw from center field by JaCoby Jones.

The Tigers, though, didn't lay down. They didn't get a hit off four Indians relievers — going 0-for-12 against Nick Goody, Nick Wittgren,Tyler Clippard and Adam Cimber.

But against closer Brad Hand, they regenerated. Jones led off with a double and scored on a single by Stewart.

That's when right fielder Tyler Naquin made the play of the game. On a sinking liner by Nick Castellanos, he dived across his body and made a brilliant back-handed catch just before it hit the ground.

Naquin got up and fired a laser back to first base to double up Stewart.

"Ninth inning, their closer is on the mound and we tagged him twice and we're down by one," Castellanos said. "You smash a ball in the gap that you think has a chance to tie the ballgame and it turns into a double play?

"I guess you can say it took the air out of our tires."

Replays showed Naquin made the catch clean, but regardless, the Tigers had already used up their challenge and couldn't contest it if they wanted to.

"Just a great play, man alive," Gardenhire said. "I thought that was in the gap for sure. That kid is an athlete out there. That was some kind of play. But I was happy with our team, the way they kept getting after it.

"It took one of the better catches you are going to see in a long, long time to stop our rally." 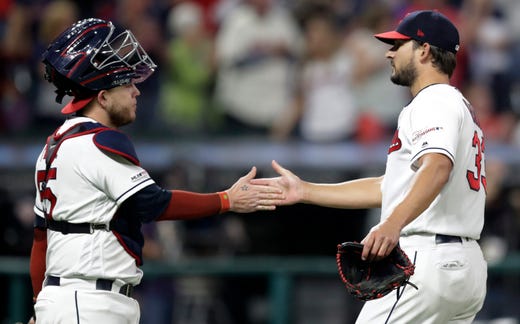 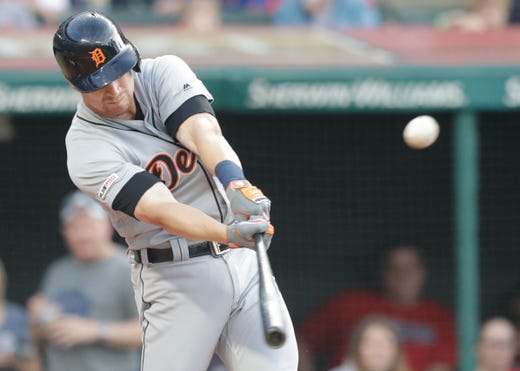 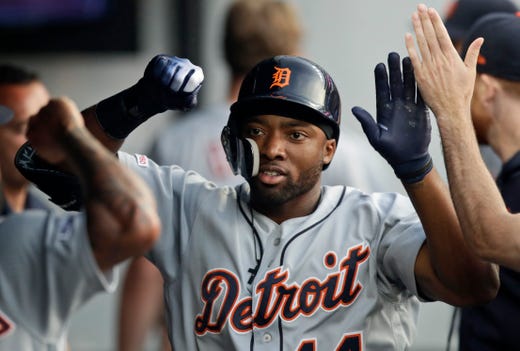 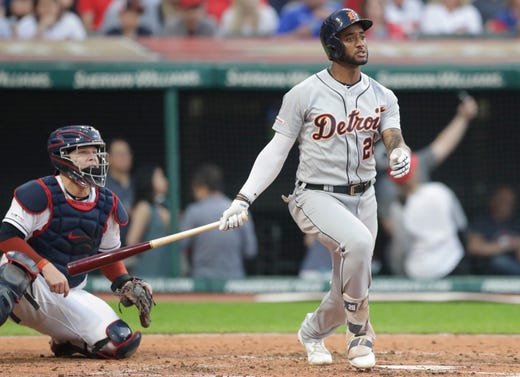 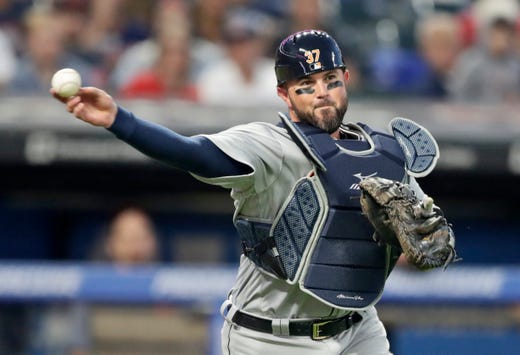 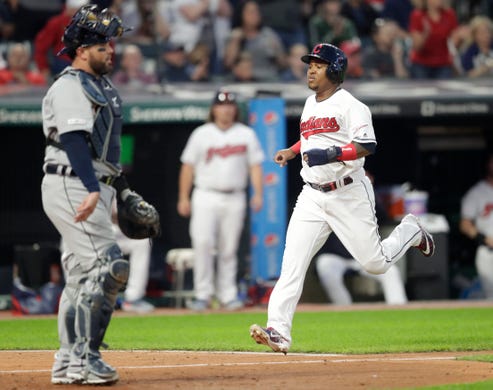 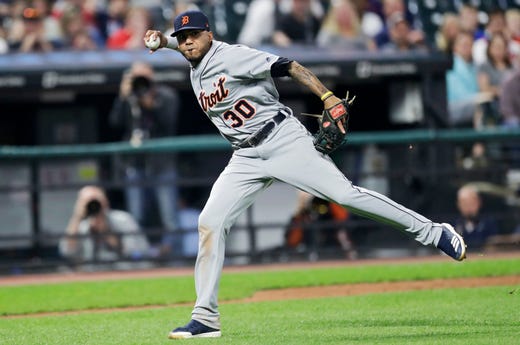 Detroit Tigers' Harold Castro throws to first base but not in time to get Cleveland Indians' Jose Ramirez during the eighth inning. Tony Dejak, AP
Fullscreen 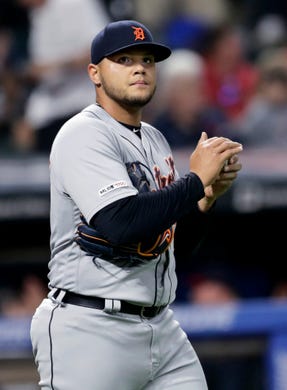 Detroit Tigers relief pitcher Joe Jimenez walks back to the mound after giving up an RBI triple to Cleveland Indians' Jason Kipnis during the eighth inning. Tony Dejak, AP
Fullscreen

The three home runs off Boyd came on a hanging slider, a floating change-up and a get-me-over 88 mph fastball.

Carlos Santana hit a two-run homer in the first, and it was just the second home run hit off Boyd's slider this season. He may have been distracted by Francisco Lindor who had walked to start the game. The Indians have stolen nine bases off the Tigers this season, so Boyd was grinding to keep Lindor close.

He threw over twice then used a slide-step to home plate. The slider seemed to pop out of his hand with the accelerated delivery and it hung over the heart of the plate.

"Yeah, I rushed it a little bit," Boyd said. "I made the adjustment after that and I got him on two sliders in the next at-bat. But he hit my mistake and that's what good hitters do."

Naquin crushed a first-pitch fastball leading off the fifth inning, sending it 428 feet into the right field seats. Jordan Luplow led off the sixth inning whacking a change-up into the left-field seats.

"You know, I felt like our guys threw the ball well," catcher Bobby Wilson said. "It's just disappointing to look there and see seven runs and 12 hits, because for me, it felt like everyone who came in did their job and executed their pitches.

"And this is the results."

You might remember last Sunday in Detroit, Bauer pitched a four-hit, complete-game shutout. The average exit velocity on the balls the Tigers put in play was 79 mph. Different story Friday.

Dixon’s home run, his ninth of the year, was an opposite-field shot into the right field seats. Castellanos, who has hit safely in 25 of his last 28 games, belted an RBI double in the third inning to tie the game.

Stewart led off the fifth with his sixth home run, a 416-foot blast to dead center. Castellanos and Miguel Cabrera followed with singles and Niko Goodrum’s RBI double chased Bauer from the game.

Bauer's line wasn’t quite as pristine: four innings, 10 hits, five runs and an average exit velocity on balls in play over 90 mph.

But the Tigers left some meat on the bone in that fifth inning. They had the bases loaded and no outs and didn’t not push across another run off Goody.

"We should've done something there and we didn't get it done," Gardenhire said. "We didn't have good at-bats with the bases loaded. That was a huge inning. We could've added and maybe got a few more runs, which we badly needed at the end."