'Things have to change': Tigers get swept by Indians again

Three defensive misplays by the Tigers contributed to a fatal five-run second inning in Sunday's 8-3 loss.

'Things have to change': Tigers get swept by Indians again 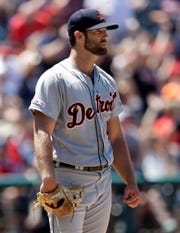 Sloppy defense, mental lapses and almost no timely hitting again conspired against the Tigers in an 8-3 loss to the Cleveland Indians on Sunday. The loss completes the Indians' second three-game sweep of the Tigers in successive weekends.

It was Game 74. Many of the mistakes — mental and physical — are repeat offenses.

"Yeah, repeat offenses, but that's who we are," manager Ron Gardenhire said. "That's who we have. You're relying on guys who aren't playing their best positions. We're playing guys all over the field because we have to.

"It's not a perfect scenario."

This game went awry in the second inning when, with some assistance from the Tigers defense, the Indians scored five times on six hits against Daniel Norris, who probably deserved a much better fate.

First misplay: With Jose Ramirez on first, Jason Kipnis ripped a single to right field. Ramirez took a wide turn at second and right fielder Nick Castellanos smartly threw behind him. The throw had Ramirez beat, but second baseman Gordon Beckham whiffed on the tag.

Second misplay: Next hitter, Indians prospect Bobby Bradley sliced an opposite-field fly ball down the left-field line in his first big-league at-bat. Christin Stewart chased it a long way but seemed to pull up a bit as he neared the foul line.

The ball, which according to Statcast had a 4-percent chance of being a hit, fell in for an RBI double.

"I think he hit the warning track and was a little tentative," Gardenhire said. "It's a play he should make. He's good enough to make that play. He's got to keep going. You have to have a better feel for where you are. He had plenty of room to catch that ball.

"I'm not out there. I don't know if the sun was in his eyes. There could be a lot of things involved in that play. But it's a play we think he should make and eventually, if he keeps working, he will make that play."

Third misplay: Catcher Kevin Plawecki followed with a high chopper over the head of third baseman Harold Castro. Shortstop Niko Goodrum fielded the ball, but threw wildly to first base. Two runs scored on what was ruled an infield hit and throwing error.

As it turned out, that error was a direct result of Castro being out of position. 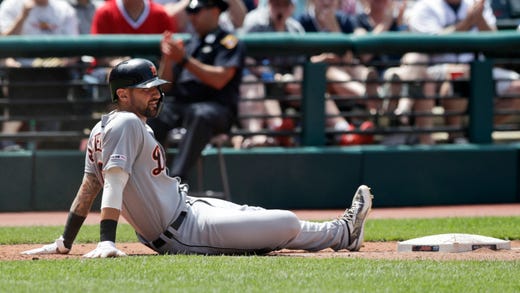 Detroit Tigers' Nicholas Castellanos sits near third base after getting tagged out in the eighth inning of Sunday's 8-3 loss to the Indians in Cleveland. Tony Dejak, AP
Fullscreen 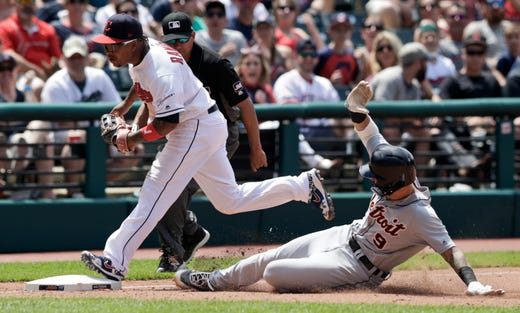 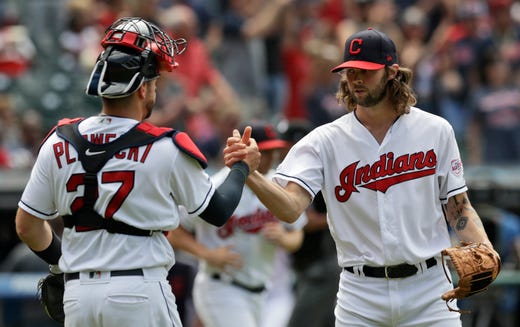 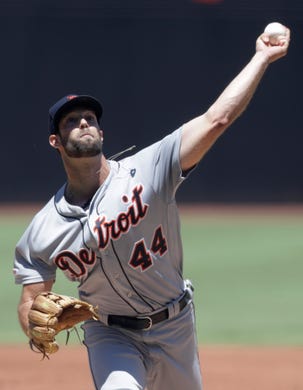 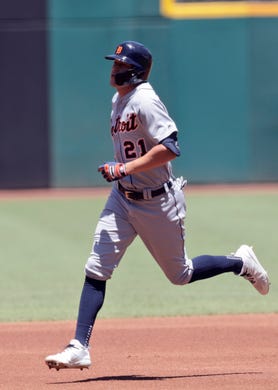 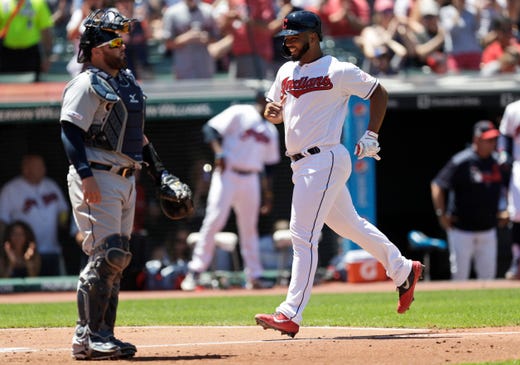 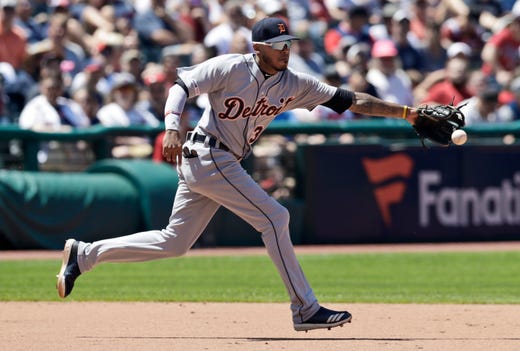 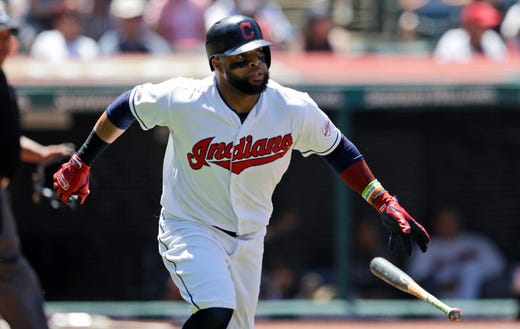 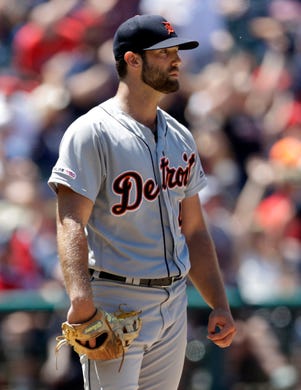 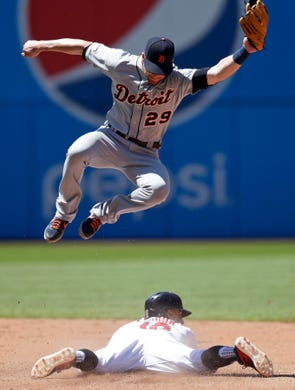 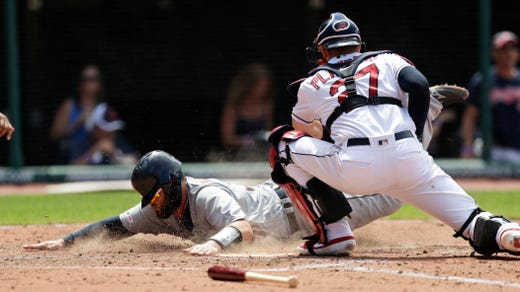 "We were playing the middle of the infield back and in double-play position," Gardenhire said. "Castro was all the way up by the base. If he was back three steps, he catches the ball.

"We were pointing at him and telling him to go back, but he didn't catch us in time...It was a mental mistake and mental mistakes lead to a lot of physical mistakes. That's what we do."

"No matter what happens, you've got to keep making pitches," said Norris, who struck out eight and had a very effective change-up (seven swings and misses). "You give up five in the second, you just got to bow your neck, accept the challenge and try to save the bullpen."

After the the second inning, he allowed just two hits, one of them a solo home run to Carlos Santana.

"I felt he threw the ball good and deserved better," catcher Bobby Wilson said. "It's kind of a repeat theme here, but he threw the ball really, really well. We have to figure something out. Guys are relying on me to get us through this and I take great pride in it.

"So, we're going to figure something out."

JaCoby Jones had an eventful day. He started the game with a leadoff home run, jumping a 94-mph fastball from Indians rookie Zach Plesac and sending it 442 feet into the seats in left-center field.

It was his second career leadoff home run, both against the Indians.

But the Tigers ended up stranding runners at first and third with no outs in that first inning, and they'd end up getting just two more hits off Plesac through seven innings. Jones was one of them, and he promptly got picked off first.

Down 5-1, Plesac threw over three straight times and Jones went back standing up all three times. The last time he got back too late.

"I wasn't trying to steal," Jones said. "He has really quick feet, probably the quickest feet I've seen in a long time. I wasn't going to steal, he just caught me off guard. Just a stupid mistake on my part."

Power-armed right-hander Jose Cisnero, who was purchased from Toledo on Saturday, made his Tigers debut in the bottom of the eighth. He hit 99 mph on the radar gun, but he walked two and was also victimized by a defensive blunder.

Kipnis rolled a ground ball that snaked through the strong side of the Tigers' overshifted defense between Goodrum and a diving Beckham.

"For Goody, that's an easy play but he started to go toward the bag," Gardenhire said. "It's a mental mistake...We missed that play and it probably cost the pitcher 20 extra pitches. These things have to change."

Wilson echoed what Gardenhire has said repeatedly, the mistakes aren't borne out of apathy or a lack of work.

"Guys are playing as hard as they can," he said. "It just seems like the ball is not bouncing our way, against Cleveland especially. The guys are playing hard. Yeah, we're making mistakes and we're a young team. It happens.

"But there isn't any quit, which I am proud of. I'm proud to be a part of a team that you know isn't going to quit. As long as we keep pushing forward, we'll be fine."

The Tigers have lost seven straight games to the Indians and are 7-28 against them since September 2017. Overall, the Tigers are 4-15 in June.