The Tigers fell, 9-6, to the Red Sox in a ballgame that ended after midnight thanks to a mid-game rain delay of 2 hours, 4 minutes. 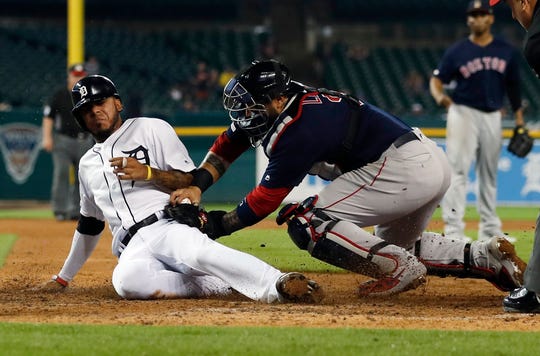 Detroit — The Tigers on Friday night drew their third-largest Comerica Park crowd of the season, though the crowd's allegiance seemed just a tad out of whack. Then again, given the current state of both teams, maybe it didn't.

J.D. Martinez, who used to own a Michigan zip code, received the largest ovation during pregame introductions, far greater than any Tigers player. And the fans cheered rather loudly when Mookie Betts led off the game with a double.

And as has been the case most of the season, the Tigers rarely looked at home, falling, 9-6, to the defending World Series-champion Red Sox in a ballgame that ended after midnight, 12:35 a.m. to be exact, thanks to a mid-game rain delay of 2 hours, 4 minutes.

It was Detroit's 23rd loss in its last 26 home games, and it's also losing another game, 7-5, to the A's in a suspended contest set to be made up later this season. The Tigers still remain under 300 runs for the season, at 299, fewer than all other major-league teams, 15 of which are required to bat the pitcher.

The Tigers trailed 3-1 before the rain delay to start the sixth inning, and then trailed 6-1 shortly after the game resumed when the Red Sox ambushed Tigers reliever Jose Cisnero.

Detroit made a game of it with four runs of its own in the bottom of the sixth inning, off a wobbly Boston bullpen and thanks to a couple errors by Red Sox outfielders.

But in the end, yet another loss for the Tigers, now 28-55 with, mercifully, two games to go before they get the All-Star break — and perhaps even more importantly, the Tigers fans get a break from them.

Rafael Devers hit a two-run homer in the third inning, a 357-foot opposite-field shot that was the third baseman's 16th homer of the season for the should-be American League All-Star, giving the Red Sox the early three-run cushion.

Several hours later, Xander Bogaerts' three-run home run in the eighth inning, a monstrous 441-foot shot to left, finally put the game away. It was his 17th homer.

The Red Sox three-run sixth inning was sparked by a double-single-double to start the frame; an error by third baseman Jeimer Candelario scored another run, and a Betts' sacrifice fly the other to make it 6-1. 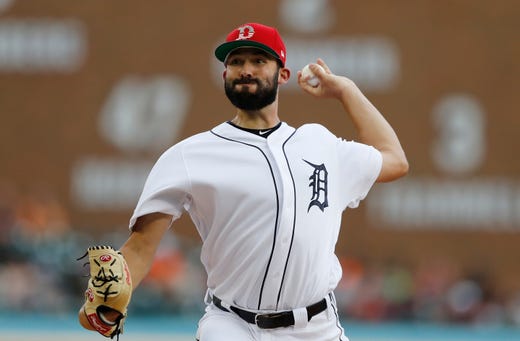 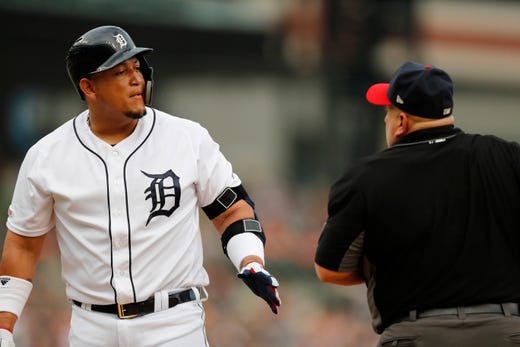 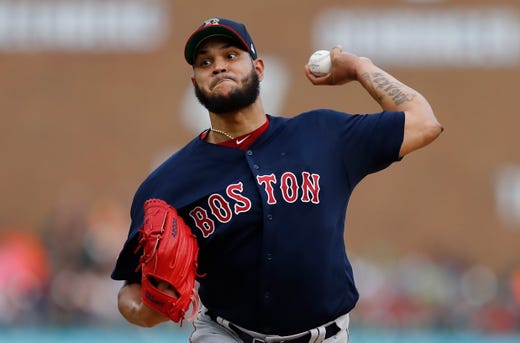 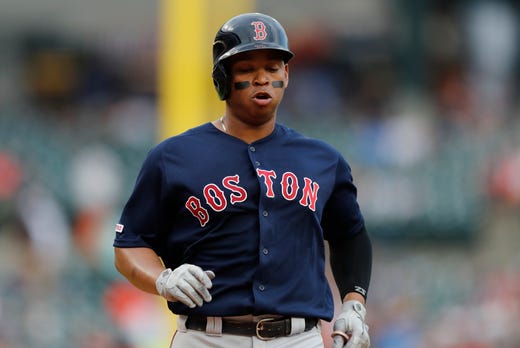 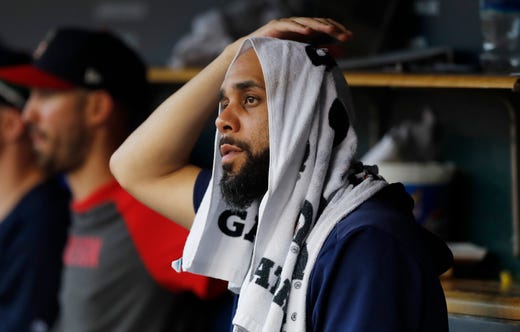 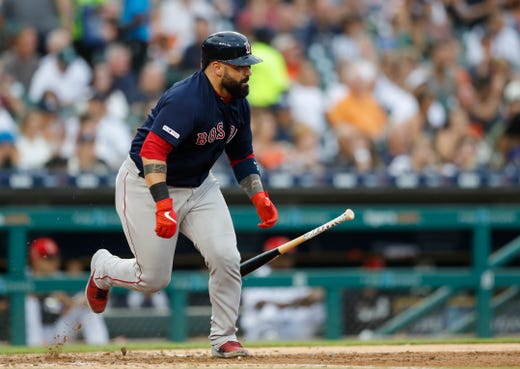 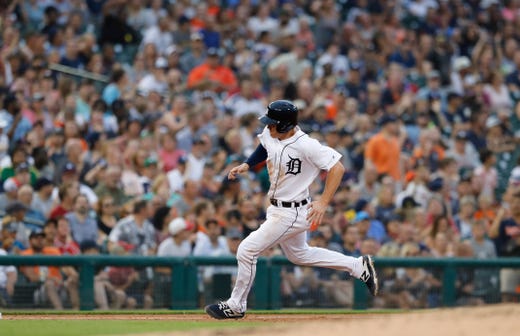 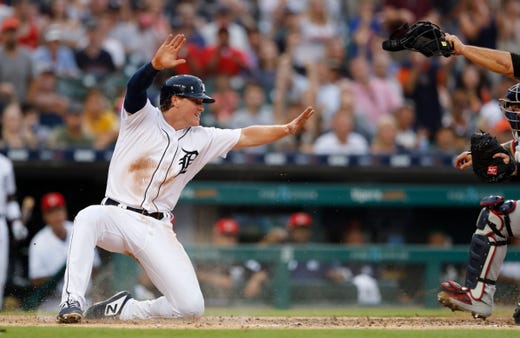 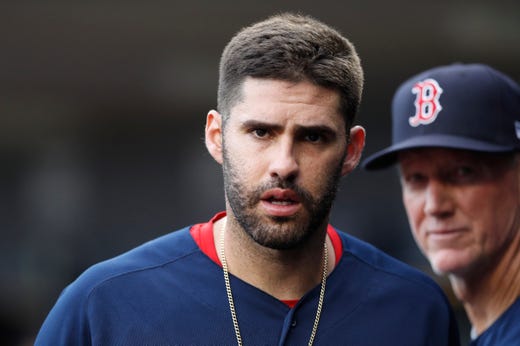 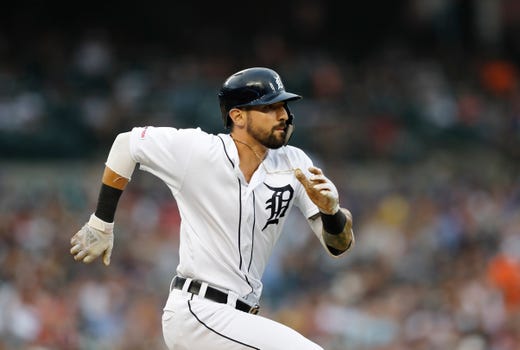 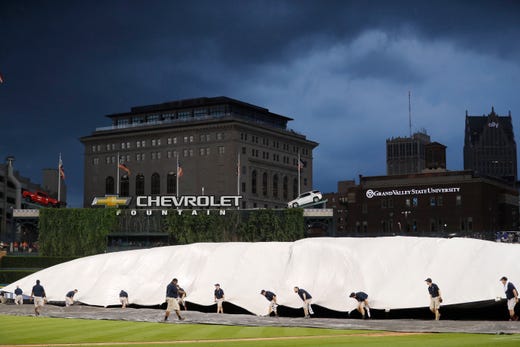 Comerica Park grounds crew pull the tarp over the infield during the fourth inning during a delay. Carlos Osorio, AP
Fullscreen 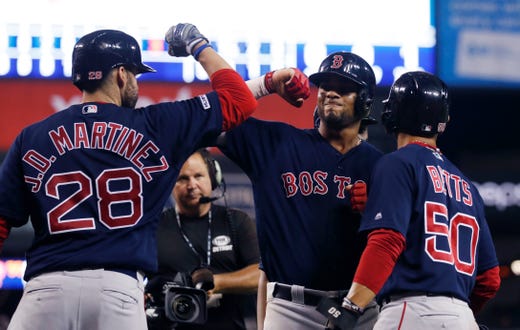 The Tigers responded in the bottom half, against Red Sox releiver Marcus Walden. Miguel Cabrera starting things off with a walk, followed by Brandon Dixon's single (his second hit of the game), and then an RBI single by Candelario — who had an RBI double two innings earlier.

Harold Castro then hit a shot to center field that should've been caught, but was botched by Jackie Bradley Jr., scoring two more runs and igniting some cheers from the hearty fans who remained in the ballpark.

Two batters later, John Hicks had an RBI single, off new Red Sox reliever Ryan Brasier, to make it a one-run game, 6-5, at the time.

Hicks capped the scoring with a home run to lead off the ninth, a 405-foot blast to deep left-center off Heath Hembree.

The Tigers got five innings from Ryan Carpenter (1-5), before the delay did in his night. He struck out four and walked one, and allowed six hits to lower his ERA to 8.36. He also was optioned to Toledo following the game to make room for another pitcher who will be called up for Saturday's contest.

Cisnero struggled after taking over post-delay and Gregory Soto then threw a scoreless inning before Austin Adams was clobbered in the eighth. Nick Ramirez posted a somewhat-clean ninth, thanks to an excellent stab and throw by Candelario at third.

The Tigers didn't get much going against Red Sox starter Eduardo Rodriguez (9-4). Victor Reyes led off the first with an infield single when Rodriguez apparently forgot it was his job to cover first base, but quickly was erased by a double play by Nick Castellanos.

Their first run scored on a two-out rally in the fourth, when Dixon singled, and came around to score on Candelario's double to the left-field corner. Dixon just beat the relay throw home, the Red Sox deciding not to challenge.

The rains then came, first light, then fast and furious to start the sixth inning, sending the crowd of 27,181 scattering for shelter. It was the third-largest home crowd for the Tigers this season — buoyed by a holiday-inspired $17.76 flash ticket sale — after sold-out Opening Day and last Saturday's Nationals game (27,716).

Meanwhile, it was a who's who of baseball dignitaries at the ballpark, with former Tigers president and general manager Dave Dombrowski returning with his new team, the Red Sox (on the same day his successor, Al Avila, received a contract extension, no less); Hall-of-Fame manager Tony La Russa and his good friend, former Tigers manager Jim Leyland; and Dennis Eckersley, a Red Sox broadcaster who spent some of the rain delay chatting with Tigers broadcaster Kirk Gibson. Apparently, they have some history.