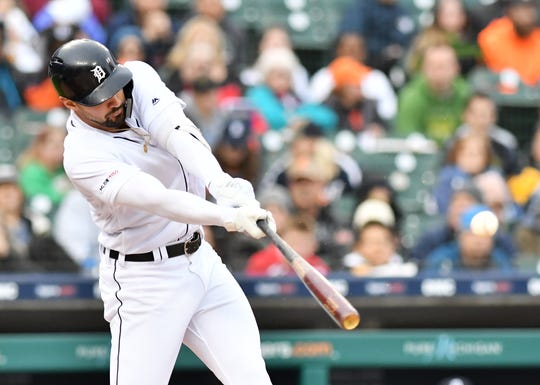 Cleveland — Go back to May 19. The Tigers were coming to bat against the Athletics, trailing 5-3 in the seventh inning, when the grounds grew abruptly came out and started putting the tarp on the field. Nick Castellanos stood on the top step of the dugout, arms raised in frustration and disbelief.

It hadn’t yet started to rain and the game was three outs from being complete. Castellanos was furious.

Now flash ahead to Monday. Castellanos was up, 3-0 count, no rain falling and again the game was stopped when the tarp was hastily spread over the infield.

“If that had happened in April or May, I would’ve been too frustrated,” he said before the game Thursday. “Three-oh count, I have a chance to drive somebody in, now it’s raining — man this sucks. Are you kidding me? Of course this happens.”

But these are brighter days. Castellanos on Monday spun baseball follies gold out of that moment. He stayed in the batter’s box as the Indians left the field and coaxed pitcher Nick Goody to throw one more pitch.

Which he did, and Castellanos playfully bunted it down the first-base line and took off for first base.

“Man, I can’t control that Laz (Diaz, umpire) calls it 15 minutes before the storm comes,” he said, laughing.

Castellanos, who very likely could be playing his final weeks in a Tigers uniform, is, at last, at peace.

“I’m enjoying July,” he said. “July has been a good month. Just getting back to enjoying baseball and trying to have as much fun as possible.”

But it’s hard to say what came first, the attitude adjustment or hot streak.

“It’s just accepting that whatever is going to happen is going to happen,” Castellanos said. “I guess as long as I have a uniform on and I am able to go out and play, it’s a good day. Just trying to get back to the basics and understanding that everything else is not necessarily in my control.”

He did make a slight adjustment with his hands at the plate. He’s not holding them quite as high as he was earlier in the season and he’s staying more upright in his setup. But the bigger adjustment has been mental and emotional.

“It’s not really the swing changes,” he said. “It’s getting back to more of a place of peace. If you look at my swing, it’s just finding something I like and I can be consistent with. But it’s about not getting pissed off every time I get out.

“It’s just kind of letting all that go. Baseball has been more fun and it’s been a little easier.”

It’s only a slight dramatization to say Castellanos got his heart broken during spring training. After not getting traded during the offseason, he had real hope of signing an extension with the Tigers. The Tigers had the same hope, briefly. But they quickly backed away and redoubled their efforts to trade him.

More: Zimmermann tired of 'getting punched in the face,' searching for way to hit back

“This, probably, in its own way, has been the most difficult year I’ve had, just with everything that’s gone on,” he said. “It’s just a learning experience. All I can do is show these guys (his teammates) that you’ve got to go out and play every day and do what you can to help the team.”

Castellanos said he and general manager Al Avila haven’t talked about what may happen in the next couple of weeks before the July 31 trade deadline.

But it hasn’t completely escaped Castellanos that he could be starting his last homestand at Comerica Park this weekend.

He’s treating the trade deadline like a building he passes every day — he knows it’s there, but he’s just stopped paying attention to it.

“Either I’m going to go to a new team and do whatever I need to do to help them win, or I’m going to stay here and continue to have fun with these guys and finish out the year.”