The Tigers needed something positive, anything, and pitcher Drew VerHagen provided it. 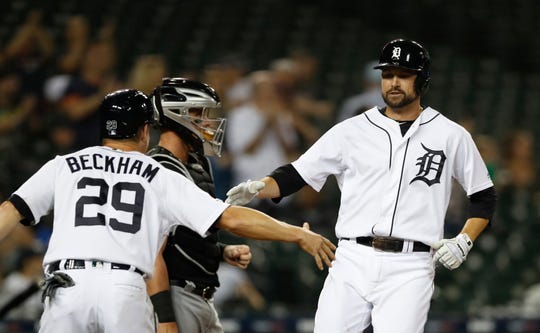 Detroit — The Tigers needed something positive, anything, and pitcher Drew VerHagen provided it.

The right-hander pitched five impressive innings in Tuesday’s nightcap of a day-night doubleheader, leading the Tigers to a much-needed 10-6 victory over the Chicago White Sox.

The Tigers had to wait a while to secure the victory. The game was delayed 61 minutes with two outs in the bottom of the fifth inning because of heavy rain showers.

Chicago won the opening game Tuesday, 5-3, extending the Tigers' recent misery — and there has been a lot of it.

But VerHagen allowed only one earned run and walked none, while striking out five in his best outing this season to help the Tigers end a five-game losing streak and record only their third victory in the last 19 games (3-16) at Comerica Park.

It was also Detroit's fifth victory in the 25 games (5-20) since the All-Star break.

“He (VerHagen) gave us a great opportunity with what he did,” manager Ron Gardenhire said. “It’s too bad the rain came, we could have gotten another inning out of him. He did a heck of a job, giving us a chance to finally break out and score some runs.

“We had some good swings and they got back in the game but we came back right again. It was kind of fun — a long night, a long day.”

Miguel Cabrera had three hits — including an infield single in the sixth inning — John Hicks had three hits, and Jordy Mercer had two hits, including a two-run home run, and three RBIs to spark the Tigers' 16-hit attack.

Whether anyone believed it would be VerHagen who carried the Tigers out of this losing streak is questionable.

But it was VerHagen who led the way Tuesday, showing a glimpse of his potential in his third start since being recalled from Toledo.

“I’ve had moments like that in the (bullpen) but I haven’t done it as a starter here in Detroit,” VerHagen said. “It felt good to do it in this uniform, and in this ballpark. It was a fun night.” 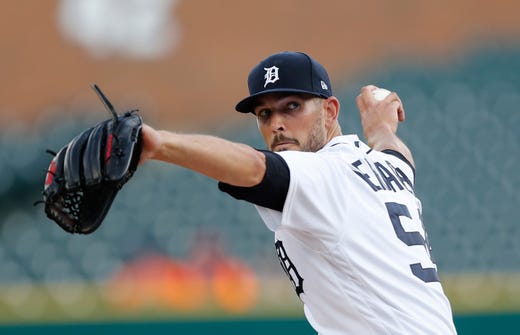 Detroit Tigers starting pitcher Drew VerHagen throws during the first inning of the second game of the baseball team's doubleheader against the Chicago White Sox on Tuesday, Aug. 6, 2019, in Detroit. The Tigers won, 10-6, to split the doubleheader. Carlos Osorio, AP
Fullscreen 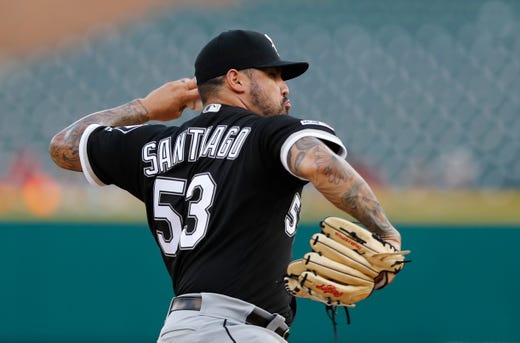 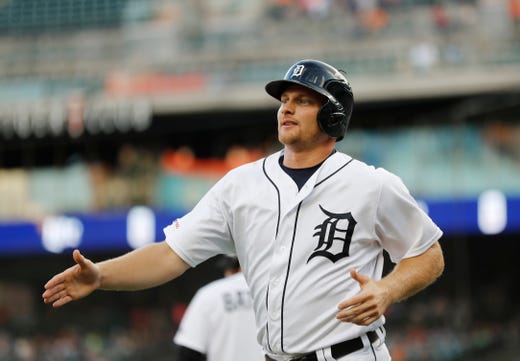 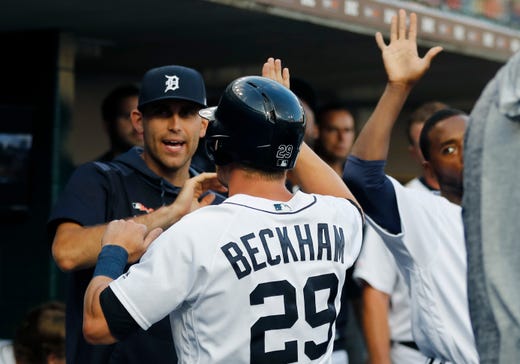 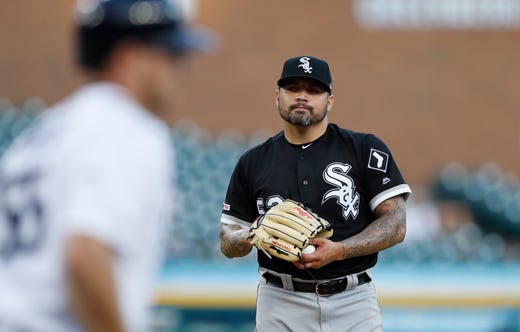 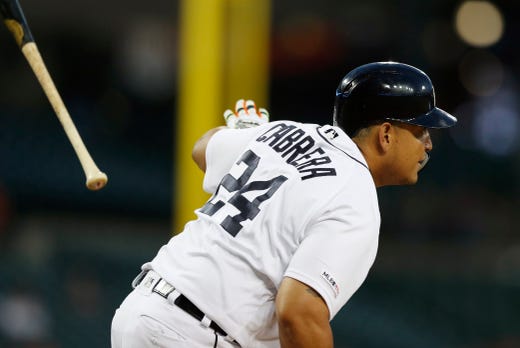 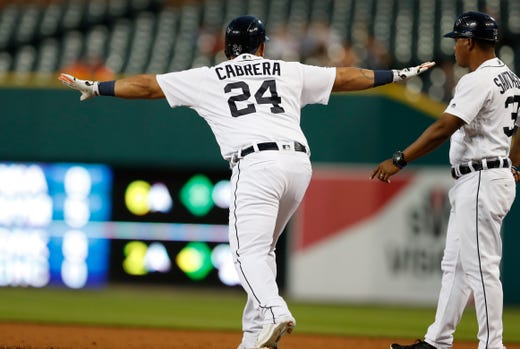 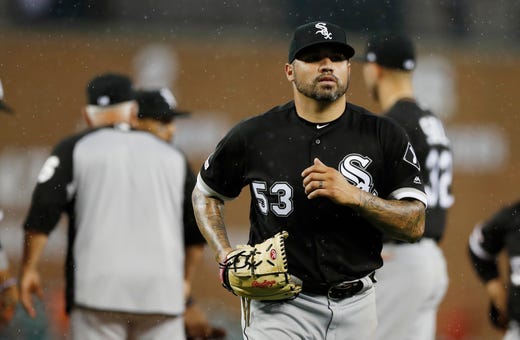 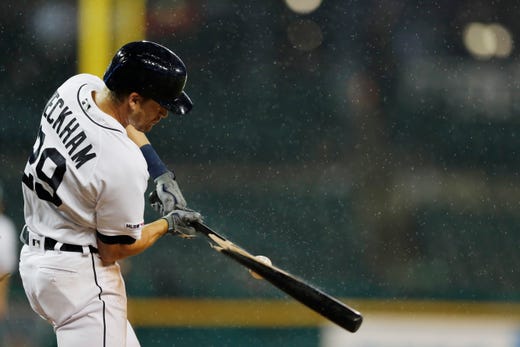 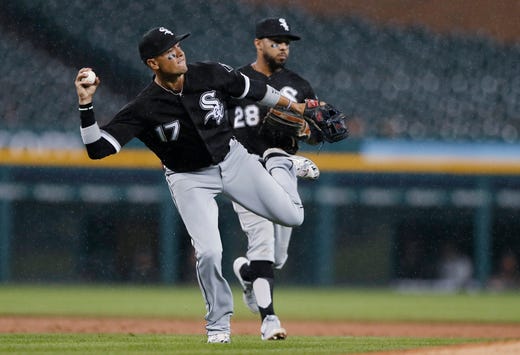 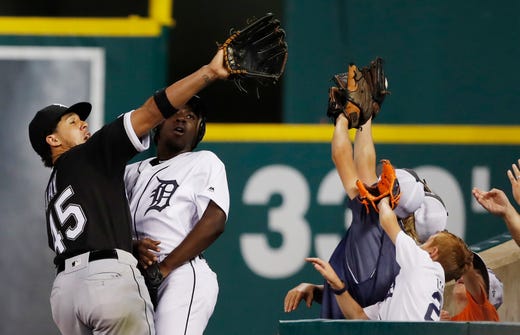 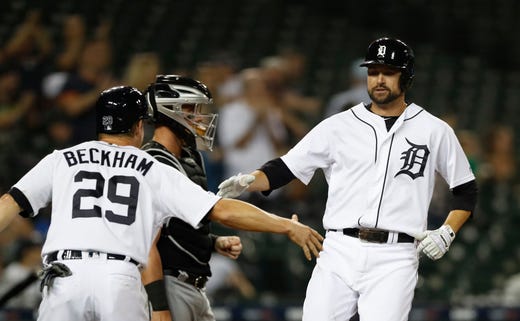 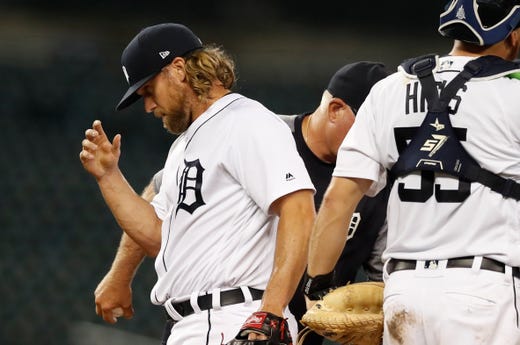 VerHagen didn’t get into any sort of trouble until the fifth inning, with the Tigers leading 3-0.

There was potential in the inning to wipe out all the good that VerHagen had woven together, but he wouldn’t allow it.

VerHagen got Tigers menace Jose Abreu to ground out to second base to end a White Sox threat after Chicago had scored a run and had two runners on.

“It was a little unfortunate it started raining. I was feeling good and didn’t feel like I was losing steam, either,” VerHagen said. “Honestly, all my stuff was working, throwing both breaking balls for strikes and fastball command was good.

The Tigers scored two runs in the second against White Sox starter Hector Santiago, then added another run in the third.

The Tigers added two more runs in the fifth before the rain came. Cabrera ignited the rally with a single, his 1,000th career hit at Comerica Park.

Hicks moved to third on Demeritte’s single and scored on Gordon Beckham’s infield single before the game was delayed.

Mercer blasted a 421-foot two-home run in the seventh inning to make it 7-2.

“We had a good ballgame,” Gardenhire said. “Some guys got to run around the bases which is always entertaining. The big thing is they came back and got close to us and we turned it right back (and scored runs). That’s what we need to start doing a lot of."

“Every time they came close, we got some runs,” Hicks said. “It was a great offensive performance, but starting out with Vergie, he threw the ball awesome."