The Tigers' first-round draft pick made quite an impression on the former catcher, who is now a rising star himself.

They weren’t even together for a month with the Connecticut Tigers, but the bond grew strong between Riley Greene and Brayan Pena.

The 18-year-old bonus baby and the rising managerial star of the Tigers organization could not say enough good things about each other after the player graduated last week, 24 days after joining Pena’s team.

“Shout out to that guy because that guy is a great guy,” Greene told reporters Thursday upon reporting for duty in Low-A West Michigan. “Whoever gets to play for him in the future is going to be lucky.

And who knows? Maybe the pair will gather as player-manager again one day for a family reunion.

For now, the folks in West Michigan are already seeing what Pena has known for awhile about Greene.

“He was unbelievable down here,” Pena said Friday. “I never seen a younger player so prepared and loves to study the game. His commitment to get better was unbelievable. It was very impressive.”

The first high school player since 1994 to reach Single-A in the Tigers organization during his draft year, it would be understandable for Greene to be timid upon arriving in Grand Rapids.

“A lot of guys come in and they’re just in over their head,” Whitecaps radio broadcaster Dan Hasty said. “For 18-year-old kids, it’s an intimidating level.”

In his #WCaps debut, Riley Greene made not one, but TWO #SCtop10 plays!

How will he follow that up? Come see for yourself! TIX ➡️ https://t.co/xkjsBsvwsYpic.twitter.com/GY3UpKfDt2

Greene splayed out for a diving catch early to the warning track in deep right center field in the eighth inning. Then, in the ninth, he crushed a ball to deep center field and raced around the bases for an inside-the-park home run.

“He’s given these guys a lot of juice in about 48 hours,” Hasty said Saturday, as the Whitecaps headed to Eastlake, Ohio. “It’s a smaller sample size, but the polish to his game is more than I expected.”

Greene added a double down the first base line on Friday, but was 0-for-5 on Saturday.

The No. 5 pick in June’s draft has played center field for the Whitecaps, pushing fellow prospect Parker Meadows to right field. Hasty said Greene’s defensive instincts and reactions to fly balls have been the biggest early revelation.

Through Saturday, Greene was hitting .302 with four home runs in 158 plate appearances over three levels.

Greene spent just nine games in Lakeland, Fla., with a Tigers Gulf Coast League affiliate in rookie ball before heading to Norwich for short-season ball in the New York-Penn League.

Today, Pena is tasked with preparing tomorrow’s Tigers to get over the hump that his group couldn’t scale back then.

One of three former Tigers catchers serving as managers in the organization’s minors, Pena led the Tigers West team to the GCL title last summer in his managerial debut.

Pena marveled about his July fling with Greene, recalling moonshots over the Dodd Stadium scoreboard in right center field, a swing that reminded him of former Cincinnati teammate Jay Bruce’s, and an everyday work ethic that should play well with Detroiters. 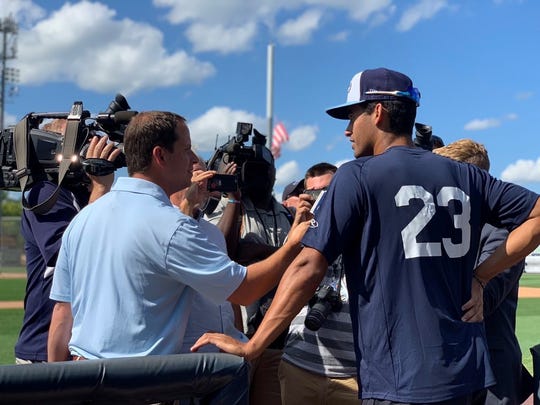 “What impressed me the most was his demeanor, the way he handled himself, how pro he was,” Pena said. “I’m telling you man, we are blessed to have him in our organization.”

Drafting a high schooler and handing him a $6.1 million contract can be risky business, especially for an organization in such dire need of impact hitters.

But Greene, who eschewed a college commitment to Florida to join the Tigers, has handled it in stride.

“I don’t find it weird at all,” Greene said. “Maybe some of the guys sitting outside the locker room asking for autographs all day long, and I have to kind of like find ways around them ... but other than that, it’s been a fun ride. I’m just getting started. I’m excited to see what the future holds.”

“This young man, the sky is the limit for him and we’re very, very, very happy to have him with us.”