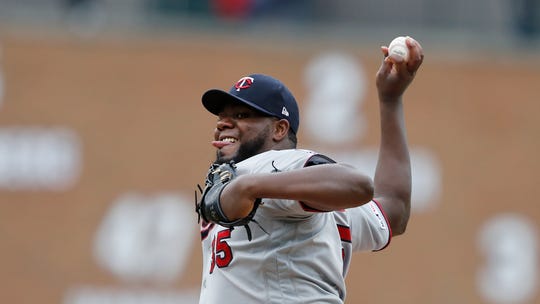 New York – Minnesota Twins pitcher Michael Pineda was suspended for 60 games Saturday for taking a diuretic, a big blow to the rotation of a first-place team heading toward the postseason.

Pineda, 6-foot-7 and 280 pounds, said in a statement he took an over-the-counter medication given to him by an acquaintance to help manage his weight. The pills contained hydrochlorothiazide, a diuretic that can mask other substances.

Pineda apologized to the organization, teammates, family and fans for his “error in judgment” and said he “never intended to cheat the system, other players or opposing teams.”

More: From the USPBL to Twins in two years: What a ride for Randy Dobnak

He said, however, he takes responsibility for “what goes in his body” and accepts the suspension. He added that he hopes to be an example to others about the importance of checking with experts before taking substances from an outside source.

The suspension came one day after a strong start by Pineda against Cleveland. Pineda, who went 11-5 with a 4.01 ERA, will miss the Twins’ final 21 games plus any postseason games. Entering Saturday, Minnesota led the AL Central by 5.5 games.

He will forfeit $989,247 of his $8 million salary. He is eligible for free agency after the season and would serve the rest of the suspension next year.

The suspension originally was for 80 games but the players’ association contested it and the penalty was reduced to 60 by arbitrator Mark Irvings under the drug agreement’s mitigation procedure, a person familiar with the process told the Associated Press. The person spoke on condition of anonymity because no comments about the arbitration were authorized.

The right-hander’s presence in Minnesota’s rotation has been one of the most underappreciated improvements made by the Twins this year. On Friday, in his 26th start of the season, Pineda reached double-digit strikeouts for the first time since April 10, 2017, with the New York Yankees. Pineda missed the second half of that season and, after signing with the Twins, all of 2018 while recovering from Tommy John elbow surgery.