Tigers left-hander Matthew Boyd will not start the series opener against the Indians because of a family emergency, manager Ron Gardenhire said. 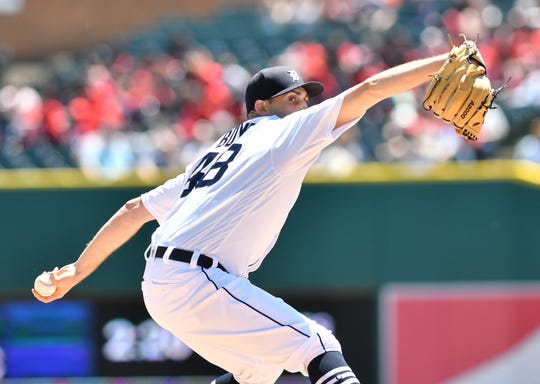 Detroit — There’s been a change of plans for the Tigers’ road trip opener Tuesday.

Left-hander Matthew Boyd (8-11, 4.54 ERA) will no longer start Detroit’s series opener against the Indians at Progressive Field. Manager Ron Gardenhire made the announcement in his office ahead of Monday’s series finale against the Orioles at Comerica Park, saying Boyd will miss a number of days due to a family emergency.

“That’s all the information we have today,” Gardenhire said. “He’s away with family matters.”

The Tigers’ ace is 2-2 over his last five games, spanning 30⅓ innings with a 5.34 ERA. Despite holding opponents to a .221 average in that span, he’s allowed eight home runs — four of which came in the Tigers’ 10-7 win against the American League Central-leading Twins. The Indians are currently 1½ games back of the Rays for the second wild-card spot.

Gardenhire wouldn’t say who would start in Boyd’s place and didn’t rule out using an opener.

“We don’t know yet,” Gardenhire said.

Gardenhire also took a moment to appreciate the strides second-year outfielder Victor Reyes has made this season.

The former Rule 5 pickup from the Diamondbacks is hitting .299 heading into play Monday with six stolen bases, 17 RBIs and a pair of long balls.

“I feel comfortable,” Reyes said through a translator. “There are some moments during the year that you feel more comfortable playing ball. But right now, I feel good having the opportunity to play on a daily basis.”

Reyes’ leadoff triple in the first inning off Orioles’ starter John Means (10-11) helped set the table for Jordy Mercer to hit his ninth homer this season and give Tigers rookie Tyler Alexander practically everything he would need to earn his first major league win.

But more importantly, Gardenhire said, Reyes has made strides on the field compared to this time last season.

“I think he’s learned to hit the cut off and slow it down a little bit,” Gardenhire said. “Earlier, even last year when he played, he’d pick it up the ball and want to get it out of his hand like it was a hot potato.”

Reyes’ two-run double in the fifth, however, also cut the inning short after he was thrown out trying to go from second to third so that Travis Demeritte could score from second.

“You can see him kind of growing up in front of your eyes,” Gardenhire said.

The two hits Monday gave Reyes a 5-for-14 (.357) showing for the series. Of the 20 hits Reyes has through 12 games this month, eight are for extra bases, including a home run from Saturday’s extra-innings win — good for a .345 average.

“He’s worked really hard," Gardenhire said. "And this kid was a little sloppy last year, but we expected that because he’s a Rule 5 kid and hadn’t played above like A-ball or something like that. So, he’s grown an awful lot. He’s putting it all out there on the field.“

Cabrera finished the day 0-for-4 and grounded out in each at-bat. With 10 homers and 55 RBIs, the hitless showing dropped his average to .285.

“He’s fine,” Gardenhire said pregame. “He was sore the last couple of days, but he said he’s good to go.”