On his 27th birthday, Spencer Turnbull gave the Tigers five solid innings, limiting the Indians to one run. 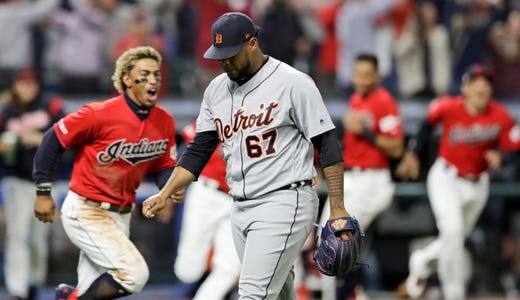 Detroit Tigers relief pitcher Jose Cisnero walks back to the dugout after giving up a winning RBI single to Cleveland Indians' Yasiel Puig in the 10th inning on Wednesday, Sept. 18, 2019, in Cleveland. The Indians won, 2-1. Tony Dejak, AP
Fullscreen 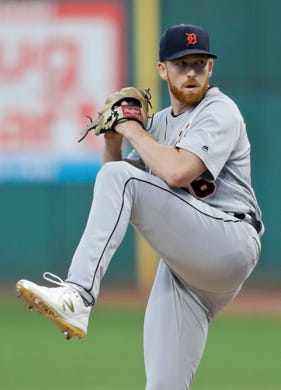 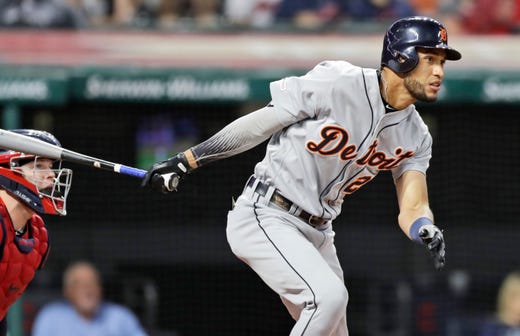 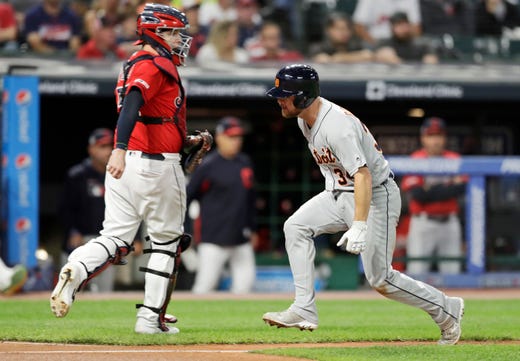 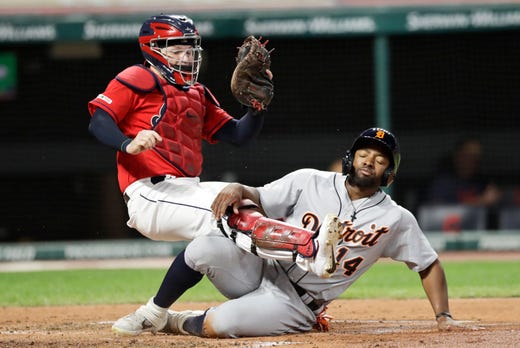 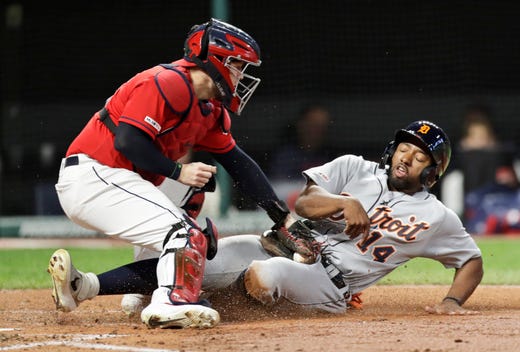 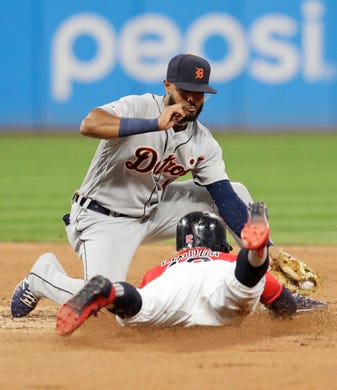 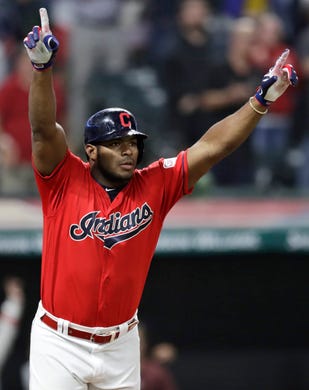 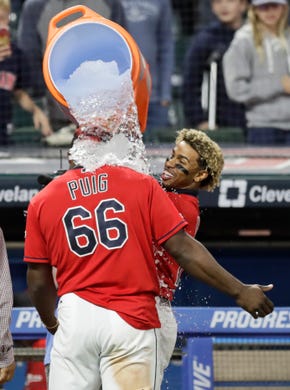 Cleveland — Spencer Turnbull, like the vast majority of Tigers’ pitchers, hadn’t had much fun against the Indians this season. He’d lost all five of his starts against them, getting tagged for 18 runs in 25 innings.

He came into the game Wednesday in danger of putting his name next to Dizzy Trout as the only Tigers pitcher to lose six times to the same team in a season.

Instead, he decided to throw himself a birthday present.

Turnbull, who turned 27, delivered his best outing in 14 starts, dating to his six scoreless innings against the Royals on June 11. He allowed the Indians a run and six hits, striking out eight with no walks over five innings before turning a 1-1 game over to the bullpen.

"For sure tonight was another step in the right direction," Turnbull said. "I felt a lot better than I have in a while."

Yasiel Puig, who has seven hits in the two games of this series, lined a two-out, bases-loaded single off the wall in right field in the bottom of the 10th inning against reliever Jose Cisnero, giving the Indians a 2-1 win.

"We can talk all we want to about how it ended," manager Ron Gardenhire said. "But what we should be talking about is how well we pitched. I thought we pitched well enough to win a ballgame tonight, that's the unfortunate part."

The Tigers did not get a base hit after the fourth inning; 18 of the final 19 hitters were retired, with a walk to Miguel Cabrera in the sixth being the final base runner.

But the Tigers' bullpen kept putting up zeroes, as well — David McKay in the sixth, Bryan Garcia in the seventh and Buck Farmer in the eighth. Farmer needed just six pitches to dispatch the top of the Indians batting order — Francisco Lindor, Orlando Mercado and Carlos Santana.

Farmer came back for the ninth and gave up a leadoff single to Puig. Mike Freeman bunted him to second base, but Farmer got Greg Allen and Jake Bauers to end the inning and send the game to extras.

But the Tigers demise in the 10th started with an error by shortstop Willi Castro. He booted a slowly hit ground ball by Roberto Perez.

"It was a tough play," Gardenhire said. "He ranged a long way to get it and didn't come up with it. ...Willi tried to make a play, a tough play up the middle. We still had a chance to get out of it."

Pinch-runner Bradley Zimmer was bunted to second base by Ryan Flaherty and Lindor was given an intentional pass. Mercado grounded into a force out and then took second base on defensive indifference.

That set up the ultimate pick-your-poison decision for Gardenhire. With first base open, he could have Cisnero pitch to the left-handed Santana, who had two hits in the game, or the red-hot, but right-handed swinging Puig.

"That's a great lineup and it's stacked at the top," Gardenhire said. "You take your choice. Having to pitch to Puig is not your best feeling in the world either. I wish we would've spun the ball, maybe he would've chased a little bit. That was the thought process."

But, after putting Santana on first, Cisnero threw a first-pitch fastball to Puig and he dented the right-field wall with it.

"Turnbull pitched a great game," said left fielder Christin Stewart, who had one of the Tigers' four hits in the game. "He gave us a chance and the bullpen came in and held them.

"We were fighting and clawing. We hit some balls hard, but they weren't falling. Just part of the game. We just have to find some way to score runs."

Three of Indians rookie Aaron Civale’s nine starts this season have been against the Tigers, and he’s been stingy. He won the first two outings, allowing just two runs with 11 strikeouts in 13 innings. He wasn’t any more generous Wednesday.

The Tigers managed a run and four hits off him in a career-best 7.2 innings.

With the game tied 1-1 in the fourth, Stewart, who had doubled, was thrown out at the plate trying to score on a two-out single to left by Brandon Dixon. Allen made a strong throw to the plate and Perez made a quick tag while being torpedoed by the sliding Stewart.

"I got a good read on it, I just didn't have anywhere to slide," Stewart said. "They looked at it, I don't know what they saw, but I didn't have a lane, really. All I could do was go right at him or try to run him over."

This situation presented itself earlier in the season. The Tigers argued that Perez blocked the plate illegally. This time, they didn't challenge.

"We looked at it," Gardenhire said. "Perez was standing inside the stripe and the ball was in the zone. You are allowed to go get the ball. We had that last time we were here. He's a good catcher and he knows the rule.

"He was standing in fair territory and he got the ball. It's free baseball. That's what we were told by the umpire the last time."

It was the second consecutive strong start for Turnbull, who still hasn't won since May 31.

"He threw the ball great," Gardenhire said. "His pitch count got up there rather quickly, but I thought he was fantastic. We're kind of seeing him work his way through. He was a lot more confident on the mound and his ball was moving all over the place.

"You saw some bad swings from some pretty good hitters. He feels good about himself and that's a step in the right direction for our team."

Of his 92 pitches, 47 were four-seam fastballs ranging from 94-96 mph. He also mixed in 13 two-seam sinkers between 96-97 mph. He mixed in 14 sliders, 10 curveballs and a handful of change-ups — just enough to keep the Indians hitters off-balance.

Turnbull got 18 swings and misses and the average exit velocity on 12 balls put in play was just 84 mph.

"One of the big things is just kind of a mindset thing — just being a little more aggressive in the zone, especially early in the count," Turnbull said. "Kind of a 'Here it is, I'm coming after you' kind of mindset. I probably got away from that, not intentionally, just kind of lost that confidence and aggressiveness I had earlier."