'The bat is the key': Erie outfield cast still has long way to go to reach Detroit

'The bat is the key': Erie outfield cast still has long way to go to reach Detroit 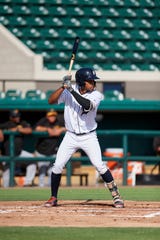 Ask the Tigers. Ask, specifically, about Detroit’s farm-team outfielders. Apart from 18-year-old Riley Greene, who had a nice break-in after he was drafted fifth overall in June, the numbers weren’t particularly upbeat in 2019.

Based on Double-A numbers that were your basic broad sampling, none of the above showed offense that would suggest the big leagues are near, or perhaps achievable.

This was a deduction tossed at Dave Littlefield, who oversees prospect development for the Tigers.

“For all three the bat is the key,” said Littlefield, who isn’t into ruling out big-league aspirations until they’re officially canceled, at least in the Tigers’ developmental eyes.

“I think with all three there are strengths, but the bats have been inconsistent. When you’re an outfielder, the bat has got to be a separator as far as being a starter, or simply an extra player.

“Azocar stepped up this season,” Littlefield said, speaking of gains on the walks and power side. “And Hill has made strides, but Double-A is different from the big leagues.”

Different, as in not as tough as the pitching each would see in the big leagues. Or, even at Triple-A, where finesse and off-speed junk so often can be a separate challenge.

Erie manager Mike Rabelo is, like Littlefield, careful when analyzing Erie’s outfielders. Managers don’t care to douse hope, or the possibility of a breakthrough for players still in their early 20s.

But what Rabelo won’t say is that he pretty much had one offensive threat at Erie the past season, Isaac Paredes, who played third base.

His outfield specialized in a lone category: defense.

“If it’s hit out there (outfield), they’re getting it,” Rabelo said. 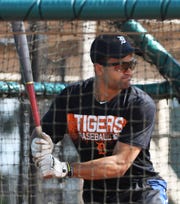 Hill, particularly, dazzles. He goes up and against walls, sprints deep into gaps, sprawls and stretches and grabs just about anything within a mile radius, which is one reason the Tigers drafted him as a 2014 first-rounder.

But then there’s the specter of a player, three months from 24, stepping to the plate four times or more in a game at Detroit, and big-league visions turn murky, if not dangerously dark.

This story of a reconstructing organization in Detroit lacking everyday outfield bats is an old theme for the Tigers. No one can yet say if much has changed at Triple-A Toledo, at least in the person of Daz Cameron.

Cameron is a one-time Astros first-rounder who made his way to the Tigers via their 2017 deal that shipped Justin Verlander to Houston.

Cameron turns 23 in January. His challenges are vivid, numerically: He played in 120 games for the Mud Hens in 2019 and batted .214. One number is of deep danger: 152 strikeouts in 120 games, which is a strikeout rate of 28.8 percent and not one a big-league regular can afford to carry unless, say, you’re on a par with Braves weapon Ronald Acuna Jr. (26.1).

“Time will tell,” Rabelo said, diplomatically, when asked if that fourth-outfield plateau might be as high as any of his Erie cast can go.

Littlefield will only say what numbers confirm. Hill probably is Exhibit A there.

“Certainly, his defense is excellent,” Littlefield said. “Having an above-average defender in the middle of the diamond is valuable. But to be a regular, you’ve got to have some bat (hitting prowess) at every position.

“With those guys at Double-A, they’re good athletes, and each one brings a little different package. But with all three I would say they need to develop on offense.” 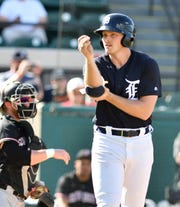 The guys know it.

Hill is a cordial gent who one day late last month stood in the SeaWolves clubhouse, in front of a locker that all but abutted a card table where four buddies were at work.

He said there had been “a lot of growth” in 2019. That he had “seen a lot more off-speed (pitches) here — and that’s a big change from Florida State League where there’s a lot of velo.”

He acknowledged his strikeout rate and said a lot had come during midseason when he was seeing junk “and hunting fastballs.” He agreed his on-base average potential could be “impactful” if he could better balance those walks and strikeouts.

Hill was hurt during too many preceding years with the Tigers. His bosses will not easily give up when they put so much faith in him with the 23rd overall pick in 2014.

Hill also had 14 homers for the SeaWolves, which isn’t shabby for a center fielder. Note, however, that a man with terrific speed (70 of a maximum 80 on the Fangraphs scale) had only 19 doubles in 120 games.

More telling, perhaps, is that he played at an Eastern League ballpark known for making hitters happy. His at-home slugging percentage was .425 and his home OPS was .736. On the road, it was .358 and .668.

Gibson, of course, has a name that suggests he will squeeze from his sinew and innards about everything that can be lent to a baseball game.

That might, or might not, be enough. His big gain in 2019, he said, was with his arm, which also was the weak point with his dad, Kirk, during his 17 seasons in the big leagues.

But in the manner dad worked and angled and strategized to make his arm adequate, Cam has done the same. He is not a guy you want to run on as he barehands a ball off UPMC Park’s left-field wall and a baserunner figures he’s got an easy double.

“Worked on my step, my run angle, and fluidity,” he said, handing credit to minor-league outfield guru Gene Roof.

He also has been trying to boost that bat, teaming with his dad during the offseason, and in-season with Scott Fletcher, one of the Tigers’ minor-league batting tutors.

Gibson hit eight of his nine homers in 2019 during the schedule’s second half. He runs well (25 stolen bases in 2019), and he bats left-handed, which can be a plus.

He turns 26 in February and it’s getting late. Not only for Gibson, but for others spread across the farm’s upper tiers, who haven’t yet shown they can help a truly needy team in Detroit.