Despite his best performance in more than two months, Spencer Turnbull remains without a win in 17 career starts at Comerica Park. 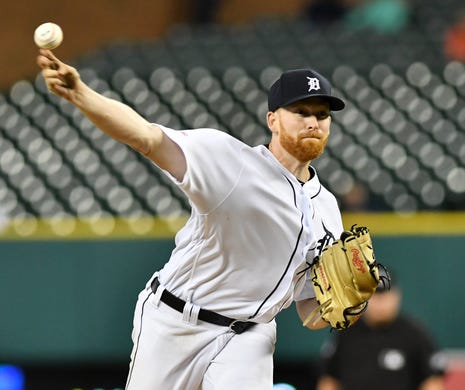 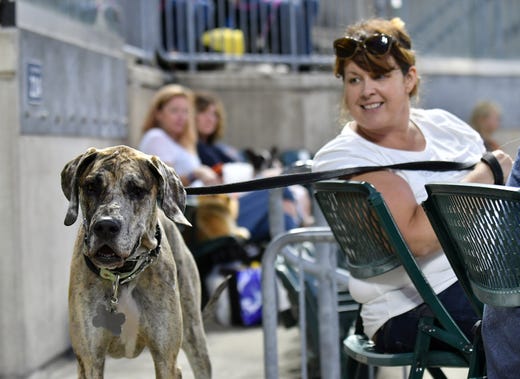 Argos, a 17-month-old Great Dane, poses while attending Bark in the Park with her owners, Becky Riedel, right, and Kurt Riedel, out of frame at right, both of New Baltimore. Robin Buckson, Detroit News
Fullscreen 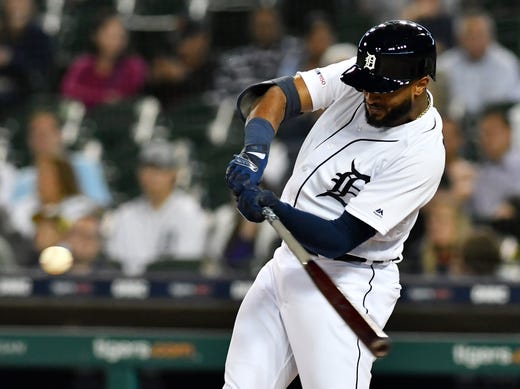 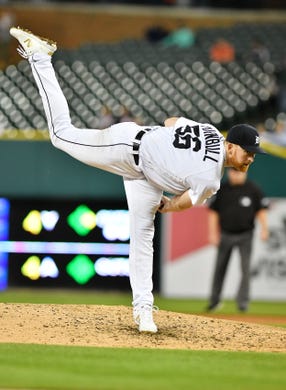 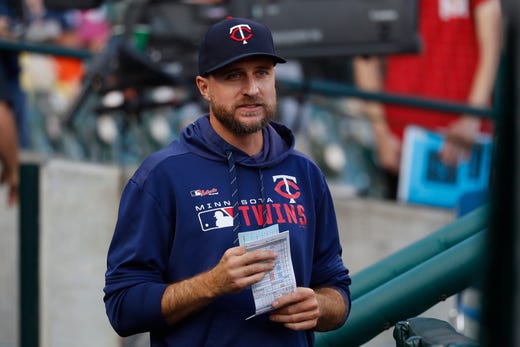 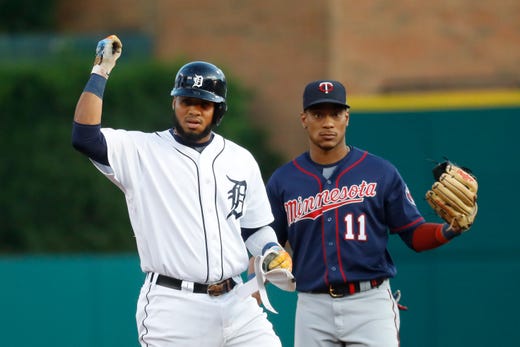 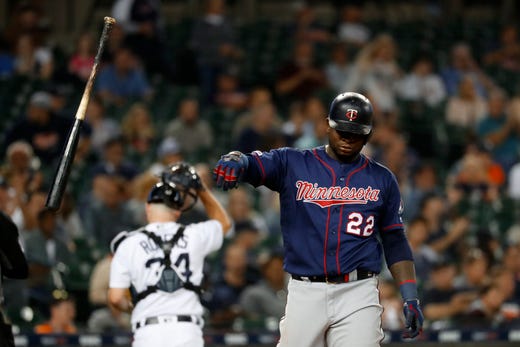 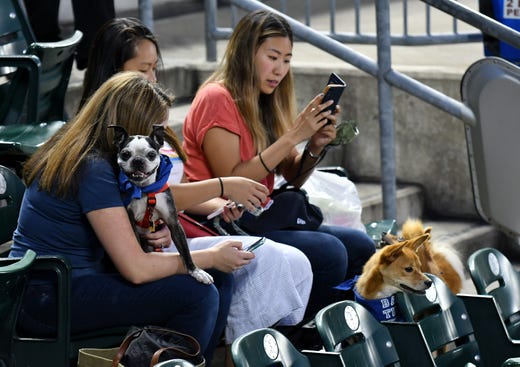 From left, Clyde sits in the lap of Sarah Henry of Detroit, sitting with Linda Yang and Kelly Young, both of Ann Arbor. Linda's dog, Riley, is bottom right,with Kelly's dog Kiwi behind him. Robin Buckson, Detroit News
Fullscreen 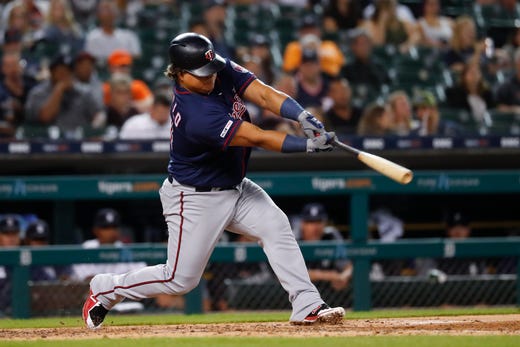 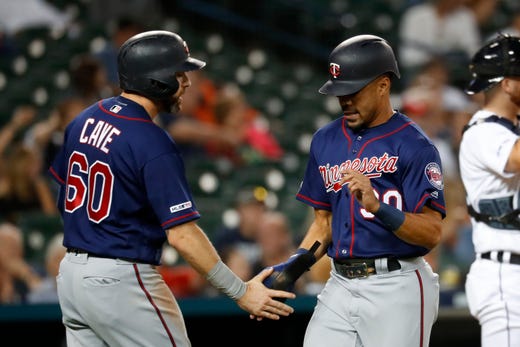 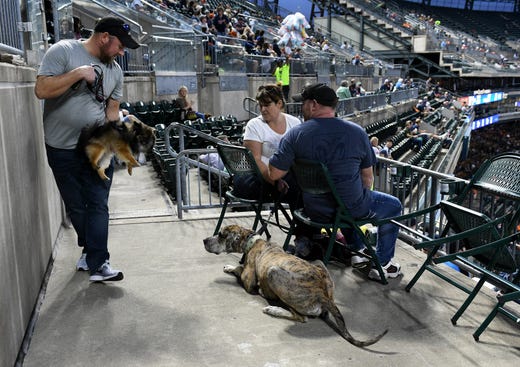 David Kozaruk of Royal Oak carries his Pomeranian Eva past Argos, a 17-month-old Great Dane with Becky and Kurt Riedel of New Baltimore as he goes to a seat in the Bark in the Park section. Robin Buckson, Detroit News
Fullscreen 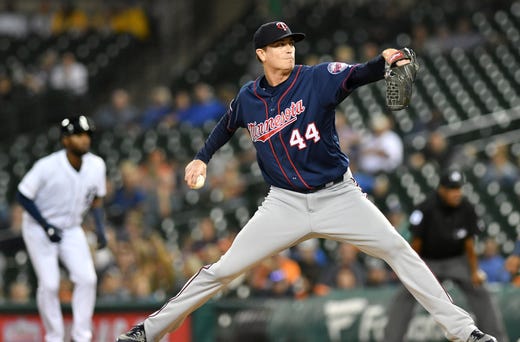 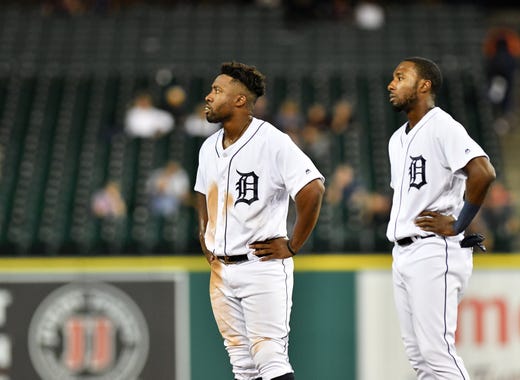 After having been left on base at the end of the seventh inning, Christin Stewart, left, and Travis Demeritte wait for their gloves and hats. Robin Buckson, Detroit News
Fullscreen 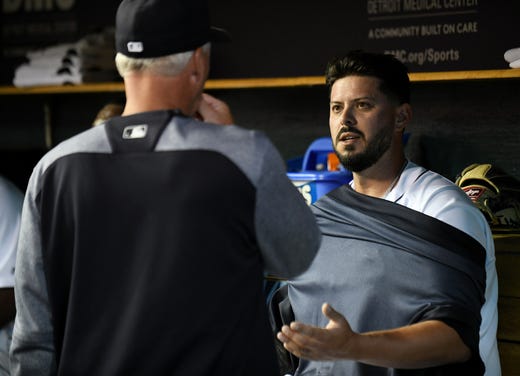 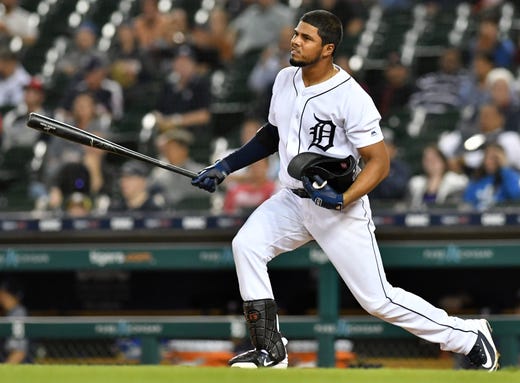 Tigers' Jeimer Candelario ends up holding his helmet after a swing in the eighth inning. Robin Buckson, Detroit News
Fullscreen 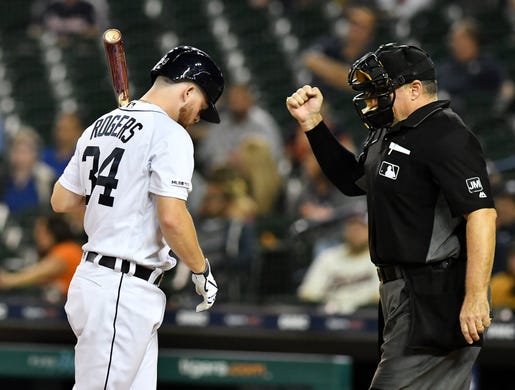 Tigers' Jake Rogers after he strikes out swinging with two men on base in the seventh inning. Robin Buckson, Detroit News
Fullscreen 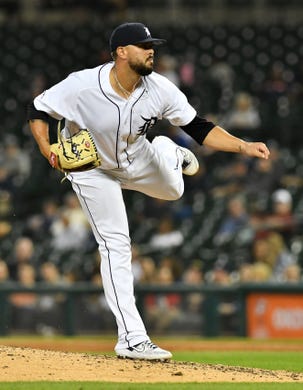 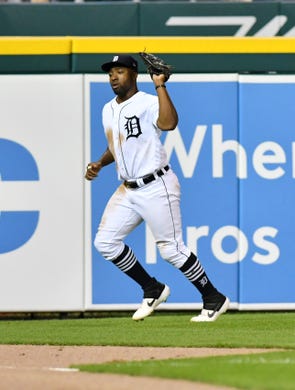 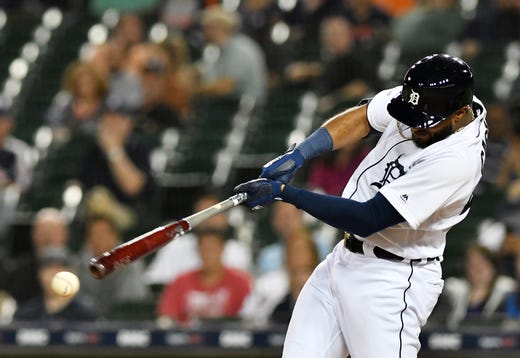 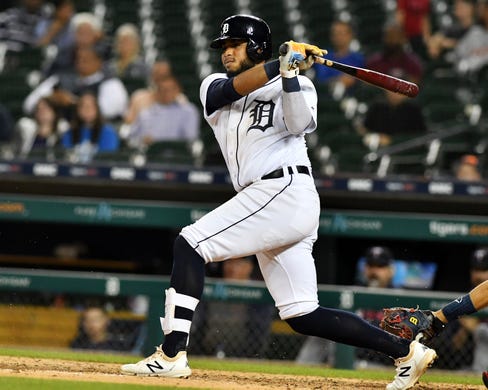 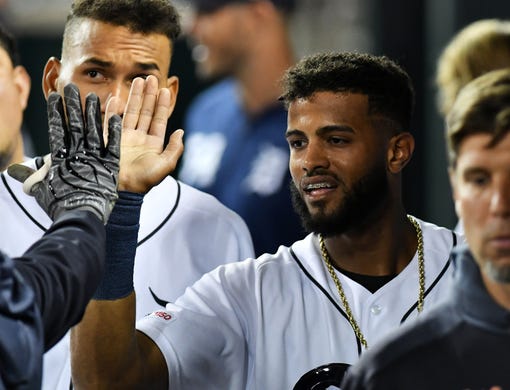 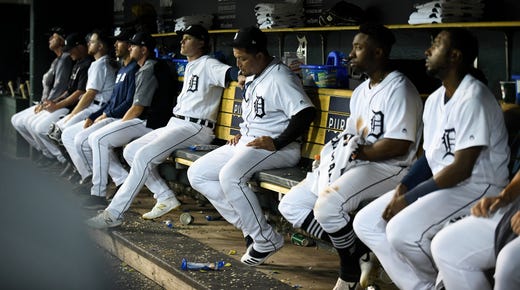 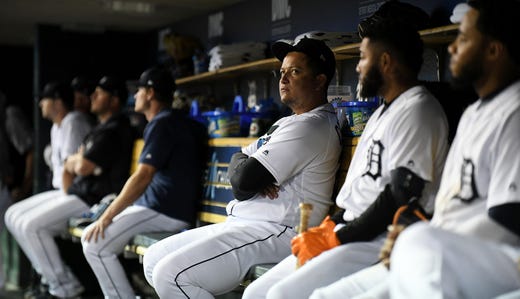 Detroit — Rookie Tigers pitcher Spencer Turnbull will have to wait until next year to put a halt to his running piece of negative history.

A two-run single by Willians Astudillo off reliever David McKay in the top of the seventh inning insured that Turnbull would not, in his 17th career home start, get his first career win at Comerica Park.

And when the Minnesota Twins completed the 4-2 victory over the Tigers Tuesday — reducing their magic number to clinch the Central Division title to two — Turnbull had lost for the 12th time at his home park, and 11th time this year.

No pitcher in major league history has lost more home games without a win.

"If he starts reading the paper and seeing the numbers, it could wear on him," Tigers manager Ron Gardenhire said. "But if he doesn't pay attention to that stuff and really watch what he's done — he's started all year in the big leagues. 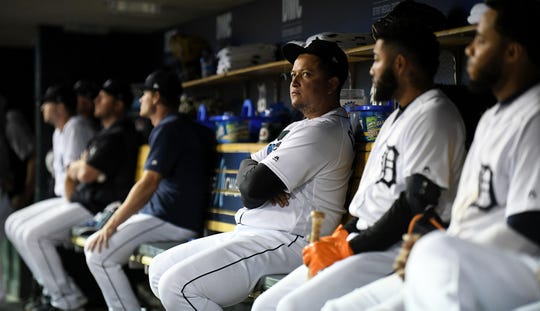 "It's been a year of experience and it's going to make you grow. That's what you've got to look at. He's had ups and downs and he's learned from all of them. The last two or three starts, he's really been throwing the baseball again."

Turnbull truly deserved a better fate on this night. In his final home start of the season, he held the Twins scoreless on four hits for six innings. It was his best outing in two months.

His two-seam and four-seam fastballs were lively, and he expertly mixed in all three of his secondary pitches — change-up (12), slider (15) and curveball (nine).

He was at 90 pitches and had a 1-0 lead when Gardenhire sent him back out for the seventh.

"He was dominant in the sixth inning." Gardenhire said. "We asked him how he was doing and he said he felt great. The temperature was perfect. It wasn't hot. Everything was working our way. It was the part of their lineup we felt comfortable with. Then, bang-bang, and we weren't going to leave him longer than that."

His night ended two batters later, after a single by Jake Cave and an excuse-me, opposite-field double that skipped off the bag at third base. 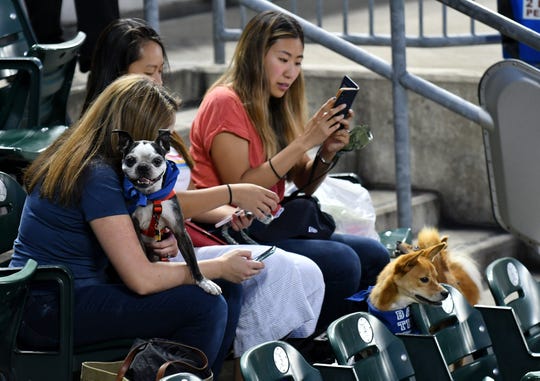 It was Bark in the Park night at Comerica Park. From left, Clyde sits in the lap of Sarah Henry of Detroit, sitting with Linda Yang and Kelly Young, both of Ann Arbor. Linda's dog, Riley, is bottom right,with Kelly's dog Kiwi behind him. (Photo: Robin Buckson, Detroit News)

"There was no chance we were taking him out," Gardenhire said. "It didn't work out, but I'd do it again."

Turnbull afterward was struggling to reconcile the strong six innings with the hard-luck ending.

"It's tough because I left not a good situation — I was pretty frustrated there for a little bit," he said. "I thought I did pretty well, but it's hard to be super excited when you give up back-to-back hits and leave runners in scoring position in a 1-0 ballgame. Rough.

"But overall, I've been throwing the ball better these last three starts, compared to the last month and a half. I am happy with that. Just frustrating when you put up zeros all day and then you give up back-to-back hits like that."

What ensued for Gardenhire, though, was a clinic on how you can do everything correctly and still not get the desired result.

He summoned right-hander David McKay, who had allowed just one run in his last 7 1/3 innings. But Astudillo greeted him with a flared single to left scoring both runners, both runs added to Turnbull's tally.

After McKay hit Jason Castro on a two-strike pitch, lefty Nick Ramirez took over and got two fast outs. With dangerous right-handed hitting Nelson Cruz up and lefty Eddie Rosario on deck, Gardenhire did what every sane baseball manager would do — he issued an intentional pass to Cruz and set up a lefty-lefty match-up with Rosario.

Ramirez threw Rosario a cutter and Rosario muscled it into left field, a two-run double to make it a 4-1 game. 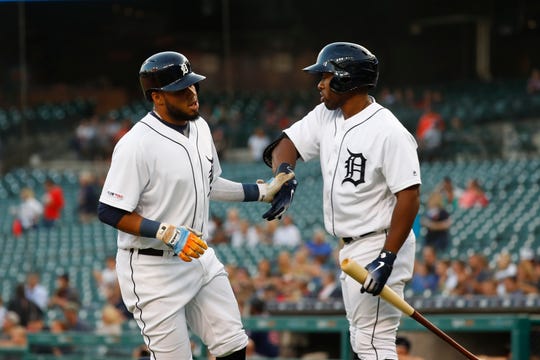 "He's a good hitter," Gardenhire said. "And he likes challenges, I knew that. When I walked a guy ahead of him I know what he does — 'OK, you got me now.' That's what you want in a baseball player.

"But Cruz wasn't going to hit there. He just wasn't."

The Tigers, meanwhile, continued their season-long inability to solve Twins starter Jake Odorizzi. He had already beaten them three times this season, the Tigers managing four runs in 18 innings.

They did push a run across in the first inning. Dawel Lugo doubled, went to third on a perfectly-placed bunt single by Harold Castro and a sacrifice fly by Jeimer Candelario.

But that was it.

Over the next five innings, the Tigers mustered only a walk against Odorizzi. He punched out seven in six innings.

Odorizzi came out to start the bottom of the seventh, but he seemed in some discomfort. The Twins trainer quickly pulled him from the game and it was revealed later he was dealing with a tight left hamstring.

Right-hander Kyle Gibson took over. The Twins had scratched first baseman Marwin Gonzalez right before the game with an oblique strain.

Gibson wasn't nearly the mystery that Odorrizi has been. Willi Castro and Lugo both doubled in the eighth, cutting the lead to 4-2.

"We played a nice ballgame tonight," Gardenhire said. "Turnbull was wonderful. He got into the seventh and we hadn't done that in a while. He gave up a couple of hits, one hit off the top of the bag, little unlucky and then the bullpen came in it got a little goofy.

"But that's what those guys (Twins) do. We held them to four runs and they score millions. Just had one inning get away from us."