Rookie left-hander Tyler Alexander was tagged for seven hits, two walks and he hit a batter in five innings, but he allowed just two runs. 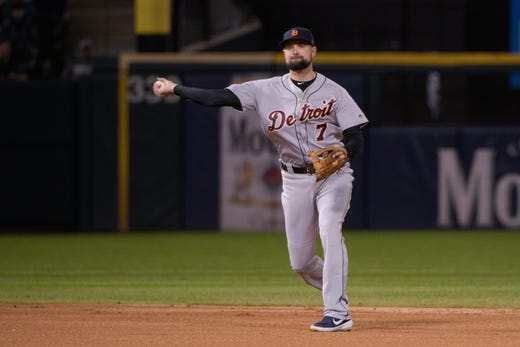 Chicago — There haven’t been many revelations this season for the Tigers — not positive ones, anyway.

Tyler Alexander has been one.

If there was a depth chart at the start of spring training, the left-hander might have been the ninth or 10th starting pitcher on it — listed behind the likes of Ryan Carpenter, Kyle Funkhouser and Beau Burrows. To suggest he would be a contributing member of the Tigers rotation the final two-plus months of the season would’ve been absurd.

"Well, I knew if I threw well I'd have a chance," Alexander said. "But with how crappy I started, I just told myself, 'One good start, just have one good start and build off that.' And I kept doing that and I ended up putting a good month together.

"That's when I got the opportunity to come here."

There he was Saturday, delivering his third straight solid start, pitching in and out of trouble for five innings and giving the Tigers a chance to salvage the second game of a doubleheader.

And, what do you know, they did. In dramatic fashion.

John Hicks, pinch-hitting with two on and one out in the top of the ninth, blasted three-run home just inside the foul pole in left, giving the Tigers a 4-3 win over the Chicago White Sox.

"It felt good," Hicks said. "Coming in in the ninth and having a chance to give us the lead. Then to be able to come through is an awesome feeling."

Coming into the ninth, the Tigers were held to a run on just five hits and were facing closer Alex Colome. Ronny Rodriguez reached on an error by shortstop Tim Anderson and Travis Demeritte singled him to third, setting the table for Hicks.

"Cutters," Hicks said. "The two before were really good ones down. That last one just stayed up. I thought it was going to stay fair. I thought I hit it enough on a line to keep it fair. But it was hooking pretty hard at the end.

"Thankfully it stayed inside the pole."

It was his 13th home run of the season and his second pinch-hit home run.

The drama wasn't over.

Yoan Moncada hit a one-out, pinch-hit home run off Joe Jimenez to cut the lead in half in the bottom of the ninth. But Jimenez got the next two outs for his ninth save.

"Our starter threw the ball fantastic," manager Ron Gardenhire said. "He gave us a great effort." 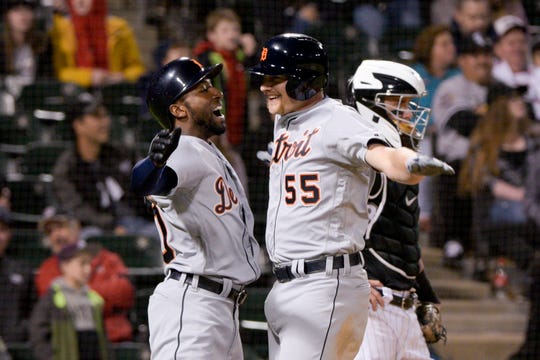 Alexander, a second-round pick in 2015, gave up just two runs in five innings while working around seven hits, two walks and a hit batsman. He got the dangerous Jose Abreu to hit double-play balls twice to get out of trouble in the first and third innings. He struck out Adam Engel to strand two in the fourth.

Alexander's best escape was in the fifth. The White Sox had runners at the corners with one out and he struck out Eloy Jimenez on three pitches and got James McCann to fly out.

He was one pitch from rescuing the two-run second inning, too.

Jimenez and McCann singled and advanced to third and second on a wild pitch with no outs. They were still there two outs later. But designated hitter Zack Collins, the White Sox's third catcher, blooped a single to center to score both runs.

Alexander threw six different pitches, though primarily spotted his four-seam and two-seam fastballs to set up his slider-curve hybrid. The White Sox put 16 balls in play against him with an average exit velocity off the bat of 85.5 mph.

"It's a blast, a dream come true, obviously," Alexander said of his first taste of the big leagues. "It was nice to finish on a good note. It was exciting, for sure. A lot of ups and down, but it's been fun."

Alexander will be given a chance to keep a spot in the rotation next spring. Gardenhire has repeatedly praised him for being able to throw all six pitches for strikes, for being fearless and for working quickly.

"I want to be a starter," Alexander said. "Everybody who is a starter coming up wants to be as starter when they're here. I hit a couple of bumps in my starts before and they moved me to the bullpen. I did well and they gave me a spot start and that went well.

"I just want to throw well. I want to show I can compete here and I can hopefully be here a long time."

But it looked like the two runs were going to be more than the Tigers' offense could overcome.

In the first game, a 7-1 loss, Miguel Cabrera's solo home run in the first inning was the only marker. And the bats were just as quiet in the nightcap.

White Sox starter Ivan Nova checked them on one hit through five innings before the Tigers chased him in the sixth.

Gordon Beckham and Victor Reyes singled and Jordy Mercer walked to load the bases. Nova was replaced by lefty Aaron Bummer. Jeimer Candelario greeted him with an RBI single and the Tigers, down 2-1, still had the bases loaded and nobody out.

No other runner would cross the plate. Christin Stewart hit into a force out at the plate, Rodriguez struck out on a pitch in the dirt and Dawel Lugo grounded out to first.

"You never know if you're going to get another chance," Gardenhire said.

This time they did.

"I will celebrate when I get home," said Alexander, who lives in the Dallas-Fort Worth area. "We still have one more game to play then I have a long drive back to Texas. I will celebrate once I'm home."