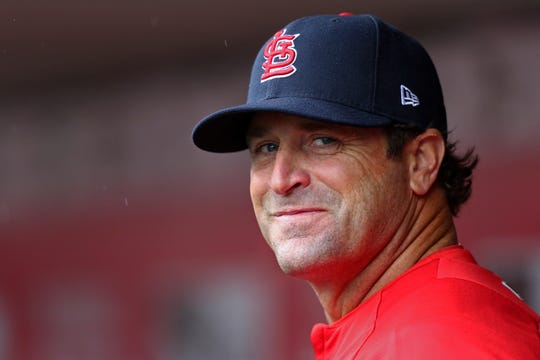 Kansas City, Mo. — Mike Matheny walked through the doors of Kauffman Stadium a year ago to take a job as a special adviser with the Kansas City Royals, an out-of-the-spotlight position that allowed him to take stock of his career and his shortcomings.

Matheny, a University of Michigan alum, had been fired by the Cardinals earlier in the summer, ending a six-year tenure highlighted by a World Series trip and lowlighted by a three-year swoon that cost him his job.

“When I left,” Matheny recalled, “I went home to my wife and my five amazing kids and I said, ‘I don’t know how to explain it but this is where I’m meant to be.”

Turns out he’ll be calling the K his office for a while.

Ned Yost decided to retire near the end of the season, and the Royals finally made official what many expected: They were handing the job to Matheny, who had spent the year working side-by-side with people throughout the organization, from the farm clubs to the scouting staff.

More: What did Tigers get with Roberto Campos, their $2.85M Cuban prospect?

“He has interacted with leadership of all levels. He’s spent time in our rookie league, with the medical staff, evaluating people for the draft,” general manager Dayton Moore said Thursday. “As Mike interacted with all those people, to a man, they were amazed by his leadership.”

That’s one of many things he spent the past year working on.

Matheny also worked on his people skills. He embraced analytics. He even hired a media consultant to learn how to better deal with the press.

All of those were criticisms that ultimately led to his ouster in St. Louis.

The 49-year-old Matheny went 591-474 with the Cardinals and was the first manager to reach the postseason his first four seasons. The Cardinals reached the World Series in 2013, losing to the Red Sox, but Matheny was fired in July 2018 as the team skidded toward a third consecutive season without a postseason trip.

‘”I needed two days. I don’t know why two days,” he said, when asked how long he needed to decompress after his firing. “I loved playing the game, but what I truly found I love to do was coach and manage.”

He will have his hands full managing the Royals.

They are coming off another 100-loss season and are in the midst of a massive retooling effort following their back-to-back World Series appearances in 2014-15. It was a run that culminated with their first championship since 1985 and energized an entire city.

But that team’s foundation reached free agency shortly after beating the New York Mets for the title, forcing the small-market organization to dismantle and rebuild. Wins have been hard to come by, even as the team showed progress with a wave of young position players reaching the majors.

The fact that Matheny spent the past season evaluating the progress of those players, along with a batch of talented pitchers still in the minors, gave him a leg up in the competition for the job.

“They aspire to play for Mike,” Moore said, “and that’s ultimately what sold us on him.”

Matheny was a Gold Glove-winning catcher who succeeded Tony La Russa as Cardinals manager after St. Louis won the 2011 World Series. But after some immediate success endeared him to plenty of Cardinals fans, Matheny was just 216-201 in his final two-plus seasons, culminating in the club’s first in-season managerial change since Joe Torre was replaced by Mike Jorgensen in 1995.

While Matheny brings postseason experience — he managed 43 playoff games in St. Louis — his real value beginning next season will be developing the young talent on the roster.

Talented shortstop Adalberto Mondesi had shoulder surgery but should be back next season, and outfielder Jorge Soler set a club record with 48 homers last season. Third baseman Hunter Dozier added 26 in a breakthrough season while Whit Merrifield had another 200-hit season at second base.

With a young lineup largely set, the Royals will spend the next couple of seasons piecing together a starting rotation and bullpen. Brad Keller and Jakob Junis are the only certainties among starters and closer Ian Kennedy was the only reliable relief option last season.

Matheny’s hiring comes at a pivotal juncture off the field, too.

In late August, the Glass family announced they were selling the Royals to an ownership group led by local businessman John Sherman in a deal expected to be worth about $1 billion. Sherman and his local co-investors will become only the third owners since Ewing Kauffman founded the club in 1969.

Sherman is considered an astute businessman and respected civic leader, but he’s also a brilliant baseball mind. He was a season ticketholder of the Royals for years before purchasing an interest in the Cleveland Indians — an interest he will be selling before his purchase of the Royals is complete.

League owners are expected to vote on the sale at their meeting Nov. 21.