Kapler was the Dodgers' farm director when a 17-year-old girl contacted him about an assault reportedly witnessed by Dodgers minor leaguers. 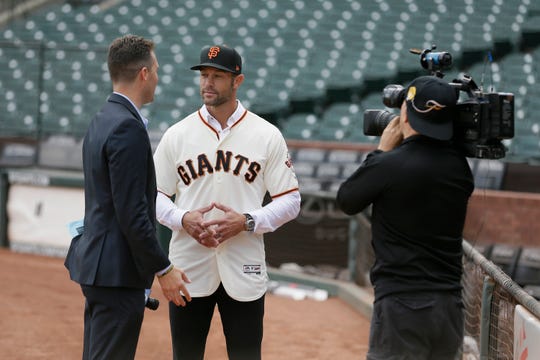 San Francisco — New San Francisco Giants manager Gabe Kapler said Wednesday that he should have sought the guidance of experts four years ago when dealing with a 17-year-old girl who contacted him about an assault reportedly witnessed by Los Angeles Dodgers minor leaguers.

The teen later accused one of the players of a sexual crime, something Kapler said he didn’t know in 2015 when the Dodgers organization opted not to contact police. Kapler was the Dodgers’ farm director at the time.

In hindsight, Kapler and Giants president of baseball operations Farhan Zaidi, who was then the Dodgers’ general manager, said they wished they had been more supportive of the young woman and asked for advice from the outside.

“I think this is the right time to say that I’m sorry that I didn’t make all the right moves,” Kapler said as he was formally introduced by the Giants. “Everything that I did I acted on from a place of goodness and from my heart and wanting to do the right thing, but I was naive. I was in over my skis and trying to do things on my own when it was very clear that I needed counsel.”

The Washington Post reported in February that Kapler did not alert police of the alleged assault in 2015. The newspaper said Kapler received an email from the 17-year-old saying she had been assaulted by two women during a night of partying with two Los Angeles minor leaguers. The girl later told police she was also sexually assaulted by one of the players. Kapler tried to arrange a dinner with the girl and the two players, and engaged in discussions with the girl’s grandmother, but he never alerted authorities.

Kapler posted on his personal website earlier this year he didn’t know about the sexual assault allegation, saying, “There was no allegation of sexual assault made to me during my handling of this incident.”

Kapler said Wednesday he is taking responsibility for his past error in judgment.

“I don’t think that I did enough, and we’ve talked about some of the ways that I could have been better in those situations,” Kapler said. “I have a lot of remorse for that. I wish I would have been more informed, I wish I would have gotten more informed and I take responsibility for not taking those steps. … My responsibility in the issue was my responsibility in the issue and that was to ask more questions, it was to get more counsel, it was to not naively think that I was in a position where I could help in the specific ways that came up.”

Kapler acknowledged the challenges of having to explain himself and his actions from the start in a new job, especially following in the footsteps of the retired Bruce Bochy, who won World Series championships with San Francisco in 2010, ’12 and ‘14.

The 44-year-old Kapler, who played with the Tigers during his career, said he will eventually gain the trust of the fan base. Some of his first conversations with the players might be about what the Giants stand for rather than between-the-lines baseball talk.

He realizes he is not the most popular hire.

“Yes, I feel like I’m in a little bit of a hole and yes that means something to me,” he said. “I think I would probably just use it as an opportunity to roll up my sleeves a little bit more, to dig in a little bit more to really find out what the issues are, to find out why I have had some of those issues and why so far I have not been a popular hire, and then be responsive to those things.”

The Philadelphia Phillies fired Kapler on Oct. 10 after he went 161-163 over two seasons. Zaidi chose him to lead the Giants over Astros bench coach Joe Espada and Rays bench coach Matt Quatraro.

Zaidi said the incident involving the minor leaguers didn’t come up before the Giants hired Zaidi last offseason. He said, “there was never an attempt to cover anything up.”

“We need to do better in this area. We’re talking incident management and not really talking about why these incidents happen in the first place,” Zaidi said. “As I think back to not just the past year but my 15 years in baseball, I realize I haven’t done enough. I haven’t done enough on the side of preventing those things from happening at all rather than what the right thing is and what the right protocol is for how to handle them. And that’s something that I pledge, and we as an organization pledge, to be much more proactive and aggressive about going forward.”