Who will the Tigers draft at No. 1? It could come down to this trio of stars

Three college stars appear to be in the running to be drafted No. 1 overall by the Tigers: Spencer Torkelson, Austin Martin, and Emerson Hancock.

Who will the Tigers draft at No. 1? It could come down to this trio of stars

Vanderbilt star Austin Martin figures to be one of three favorites to be selected No. 1 overall in next June's Major League Baseball draft by the Tigers. (Photo: Wade Payne, Associated Press)

Six months from now the picture will be clearer. Choices should be more distinct. The Tigers by then might have decided who they’ll grab with the first pick of big-league baseball’s 2020 draft.

Or, it could be someone who has done what blessed talent often does during the weeks preceding a draft — come from behind to win scouts’ hearts and front offices’ passions.

Which would explain why projections for the June draft are just that — projections — although in the case of Torkelson, Martin, and Hancock, about the only thing that looks as if it could derail them from "Top Three" status is an arm going to pieces or a bat taking a weird sabbatical.

They are that good, that commanding heading into their junior college seasons at three starry universities: Arizona State, Vanderbilt, and Georgia, respectively.

The Tigers aren’t saying anything, not this early, and whatever they do say between now and June either will be confidential, or evasive, or even a ruse designed to keep negotiations flexible and their rivals guessing.

But a consensus already has formed, nationally, with publications and scouts agreeing an early top three for 2020 are Torkelson, a hammering first baseman from ASU; Martin, a flexible infielder with a premium bat who could also play the outfield; and Hancock, a right-handed, blow-away pitcher who is pushing 6-foot-5 and who looks at times like (A) Astros powerhouse and current free agent Gerrit Cole or (B) a guy who earlier pitched in Detroit and who last has worked for Houston named Justin Verlander.

It’s already considered to be a deep draft, the 2020 sweepstakes, with the added distinction that three players who might be easy first overall picks in any year are bunched together heading into 2020.

Three big-league scouts from teams outside of Detroit were interviewed this month, all of whom asked for anonymity because of concerns about sharing information that might be considered proprietary.

Each scout agreed Torkelson, Martin, and Hancock would be safely listed as top three picks seven months before the 2020 draft. None of the scouts felt comfortable listing the three in any kind of pecking order, although one believes Hancock is in fact a top prize if he stays healthy and shows no issues from some LAT inflammation that kept him from pitching this summer for Team USA. 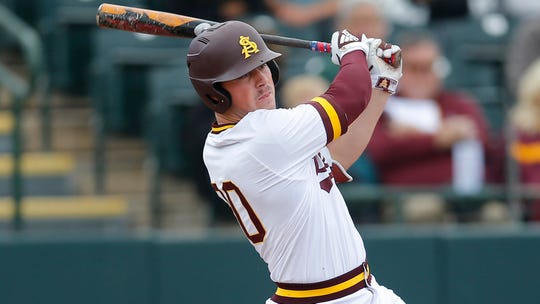 In any dissection of the three, raw 2019 data is imposing:

► Torkelson, 20, first base, right-handed hitter, 6-1, 220 pounds: Batted .351 last year, his sophomore season, with a 1.153 OPS. Obliterated a single-season ASU home-run record for freshmen that Barry Bonds had earlier held when Torkelson slammed 25. Followed with 23 homers last season, with a .707 slugging percentage and .446 on-base average, helped by 41 walks in 57 games and only 45 strikeouts.

Two of the three players were drafted out of high school (Martin, 37th round, Indians; Hancock, 38th round, Diamondbacks), while all three have taken on serious luster heading into their junior-year college seasons after Martin and Hancock earlier shunned big-league bucks.

The Tigers are trying to rehabilitate a roster in Detroit and have a ton more pitching in their system than hitting, which makes either Torkelson or Martin draft-class royalty.

Torkelson is more the power guy and tempts because he happens also to be a good hitter who isn’t big on strikeouts and who doesn’t mind taking walks.

A scout from an American League team called Torkelson’s swing a work of art. His power, the scout said, was an easy, breezy fury that can turn fences in any direction into fly-by zones. It was a view shared by a National League scout who especially likes that Torkelson’s swing is short and not the longer version that in the big leagues can be beaten or exploited.

That same National League scout, familiar with the Pac-12, believes Torkelson could be a better hitter, with demonstrably more power, than Andrew Vaughn, the right-handed masher who last year played for Cal and who was snagged by the White Sox with the 2019 draft’s third overall pick.

Torkelson has another advantage, which to a sideline fan might seem trivial but to a scout means everything: age. Torkelson doesn’t turn 21 until next August, almost three months after Hancock, and five months later than Martin.

It means, throughout his competitive life, he has been working against generally older opponents who haven’t beaten up on the kid. Even a few months of difference there will show up on a scout’s notebook or on an analyst’s laptop.

Torkelson has one tactical soft-spot compared with Martin: He’s a first baseman. For now, anyway, and this is where Torkelson’s future intrigues.

Torkelson played his prep years as a shortstop and third baseman and sits at first base at ASU only because the Sun Devils infield is supreme. As many as three ASU first-rounders are expected to be nabbed next June.

The National League scout said any team drafting Torkelson would be wise to at least explore third base. Nor did the same scout disagree with those who believe Torkelson might fit in left field, or even right field. He is, the scout said, a corner-position player —infield or outfield, with of course his right-handed throwing arm making third base a preference over first base.

If he were to move to third base, how, the scout was asked, might Torkelson compare with another slugging West Coast third baseman who was taken second overall in 2013, by a Cubs team that then was about where the Tigers are today?

Kris Bryant naturally had the better glove, the scout said. Torkelson would today be considered the better hitter at the same stage and age. 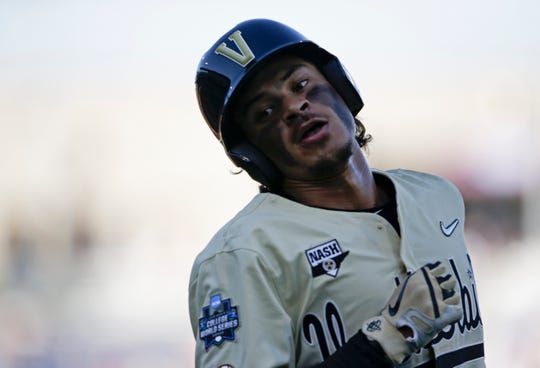 Vanderbilt's Austin Martin (16) reacts after being called out at first base during the third inning against Michigan in Game 3 of the NCAA College World Series baseball finals in Omaha, Neb., Wednesday, June 26, 2019. (AP Photo/Nati Harnik) (Photo: Nati Harnik, AP)

Martin is different in all ways except for his prime-time skill: He is a hitter. A very good hitter. A better hitter than Torkelson, minus the power.

In his skill set, Martin’s fans see another version of Alex Bregman, the Astros superstar whose pop and prowess at third base have made him a popular pick as American League Most Valuable Player.

In fact, the two players are similar in height and weight, although Martin is probably generously listed at 6 feet.

Martin’s gift for hitting, particularly in squaring up tough pitches and driving them on a line, is so radiant that there would seem no issue with snatching him first in 2020.

But scouts aren’t sure his muscle is quite there. He hit 10 home runs last spring for Vanderbilt on the Commodores’ way to a national championship. He will get stronger, scouts say, for sure, and in fact the Bregman comparison might be bang-on.

But a first overall pick ideally has power that can break apart games and make him more of a franchise-value talent.

In Martin’s favor is that he has done his hitting against the best pitching college baseball offers: the SEC, where batters rarely catch a break.

Another Martin plus plays into the Tigers’ eternal hunt for position help. He can play at least three infield spots He has upper-tier speed and could shift to center field, which is where another National League scout familiar with Martin believes he would best fit.

Kiley McDaniel, a former Atlanta Braves scout and now lead writer for Fangraphs.com, is a national draft expert and says Hancock in most years and maybe in 2020 would be an easy first-overall prize.

He wonders, as do others familiar with Detroit’s tastes, if Hancock might still be their choice, given the Tigers’ affection for SEC pitchers in the manner of their first-overall grab in 2018, Casey Mize, and past first-rounders like Alex Faedo and Jonathon Crawford.

But the Tigers wanted a bat in 2018 and if that same wish list sticks in 2020, Martin’s rare pluses as a hitter make him, in McDaniel’s view, the better early choice at one-one. McDaniel’s thoughts are shared by Keith Law, a one-time Blue Jays front-office employee who scouts baseball and prospects for ESPN.com.

McDaniel says of Martin: “The bat-speed, the contact-rate, pitch selection — everything’s there. Something I was told last year, and two guys have since verified it, is Martin’s rate of hard-hit balls, ones 95 mph (exit velocity) or higher, was like the highest they’ve ever seen.

“His ability to pick the right pitch and square it up was off-the-charts. This, even though he probably has average raw power, and he’s not big, physically.”

One of the big-league scouts steeped in Martin’s style says his arm is light at shortstop and that center field is his niche. The scout has doubts about Martin’s long-term punch and wondered if overall impact would justify a one-one draft tag.

Still, the same scout said, there was no questioning Martin’s fast bat, energy, or intensity. All traits, the scout said, were big-league-grade. Now. 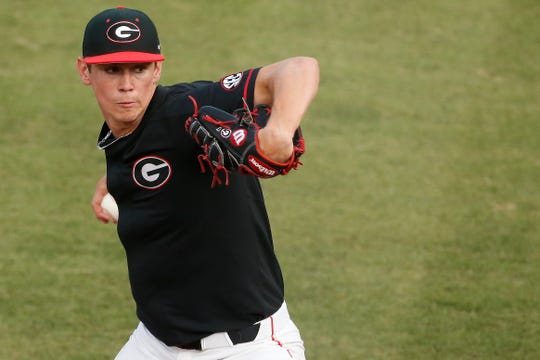 That leaves Hancock. And not for a moment can he be shunted aside, no matter how badly Detroit needs position artillery.

Hancock was big-league material in high school, one of the regional scouts said, in size and in that scout’s-eye assessment: how Hancock carried himself.

He zoomed after shifting to Georgia, going from 86-92 with his prep fastball to, two years later, cruising at 94-97 and reaching 98. He had a feel for spin and for a change-up, the scout said, in high school and at Georgia has had the same ascent with his secondary pitches. He has since added a cutter-slider for the essential fourth pitch that’s now vogue for starters.

It’s the fastball that most draws comparisons to Cole. Hancock can throw it upstairs, where scouts and front offices now want it lasered to beat hitters. The old days of having a power-armed pitcher work on his two-seam sinker have given way to fervor for high heat. Hancock has it.

The same scout, who works for an American League team, agrees with McDaniel that Hancock would be the draft’s top choice — if the LAT issue from last summer is history, which appears to be the case. In his mind, Hancock already sits first-chair.

Would the Tigers bite — again — on a college pitcher?

Absolutely, if they decide after all of next spring’s scouting X-rays that Hancock is definitively the better bet as a one-one talent.

But the Tigers know also that they better do something about a lineup that can’t, as things supposedly progress, be stocked with free agents. They need young, exceptional, homegrown bats.

Torkelson and Martin today cut it.

Where they rest in scouts’ minds six months from now is subject to change. Or, maybe after a long spring and a few dozen games, scouts will see these three much as they view them today: as premier talents, any of whom will make a lucky big-league club a great deal better.