The Texas Rangers have completed a $28 million, three-year contract with right-hander Kyle Gibson, adding another veteran in the middle of their starting rotation.

Arlington, Texas — The Texas Rangers have completed a $28 million, three-year contract with right-hander Kyle Gibson, adding another veteran in the middle of their starting rotation.

Texas announced Gibson’s addition on Friday. He spent the first seven years of his big league career with the Minnesota Twins. 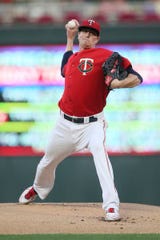 Gibson got a $2 million signing bonus, half payable on Jan. 3 and the other half by the following January. His 2020 salary with the Rangers will be $10 million, followed by $9 million in 2021 and then $7 million in the final year of the deal.

Postseason star Howie Kendrick and the World Series champion-Nationals agreed to a $6.25 million, one-year contract, according to two people with knowledge of the negotiations.

Speaking on condition of anonymity because the deal was still pending a successful physical exam, the people confirmed to AP that an agreement was in place.

The righty batter hit .344 with 17 homers and 62 RBIs in 121 regular-season games before all of his postseason contributions provided some real pop in the postseason. He hit a tiebreaking grand slam off Joe Kelly in the 10th inning of Game 5 of the NL Division Series to lead the Nationals to a 7-3 victory over the Dodgers.

The Mets re-signed reliever Brad Brach to a one-year contract. Brach’s deal includes a player option for 2021. The 33-year-old right-hander was 1-1 with a 3.68 ERA in 16 games for the Mets, holding righty hitters to a .194 batting average.

... Former Tigers catcher Alex Avila and the Twins reached agreement on a one-year contract for $4.25 million.