Lou Whitaker's agonizing wait will continue for another three years. 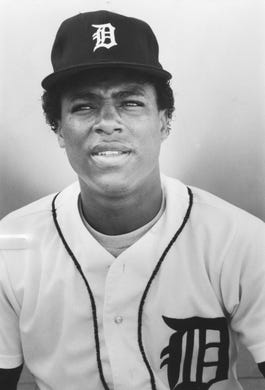 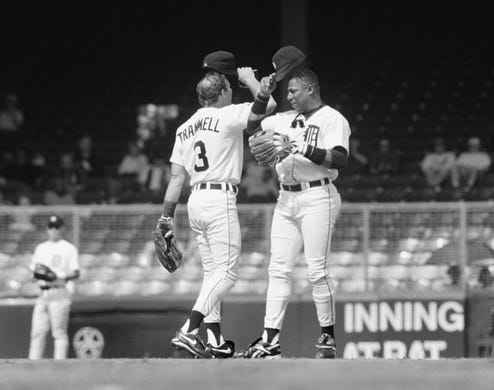 Alan Trammell and Lou Whitaker, appearing before a disappointed Tiger Stadium crowd on September 13, 1995, acknowledge the few fans who showed up to see them break the league record for games played together as teammates. Over 19 years the shortstop-second baseman combination had played in 1,915 games, breaking the record set by George Brett and Frank White of the Kansas City Royals. Joe DeVera, The Detroit News
Fullscreen 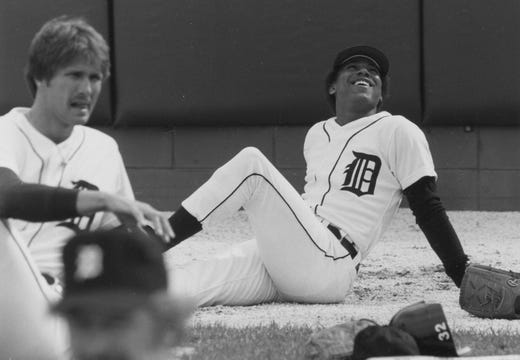 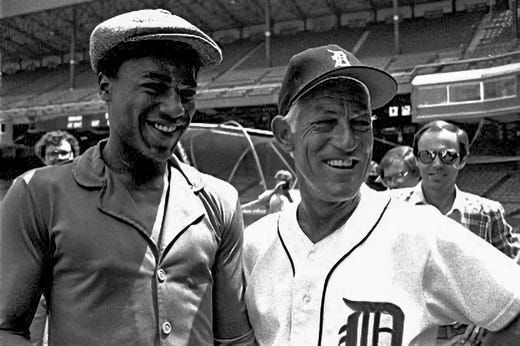 Lou Whitaker, left, poses with the new manager of the Detroit Tigers Sparky Anderson in 1979. The Detroit News
Fullscreen 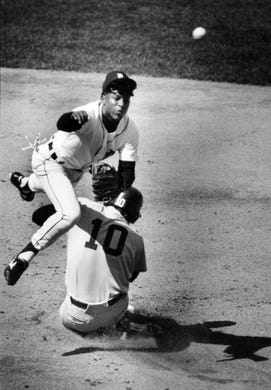 Detroit Tiger Lou Whitaker leaps over Boston's Rich Gedman who is out at Second base in the second inning of the home opener at Tigers Stadium, April 7, 1986. The Detroit News
Fullscreen 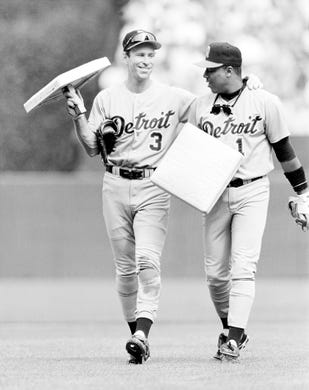 Alan Trammell, left, and Lou Whittaker walk off the field at Tiger Stadium October 1, 1995 after a special presentation where they each received "second base". This was their final game together at Tiger Stadium. Alan Lessig, The Detroit News
Fullscreen 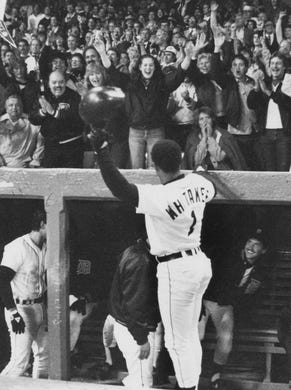 Detroit Tiger Lou Whitaker acknowledges the crowd during a game in September, 1984. The Detroit News
Fullscreen 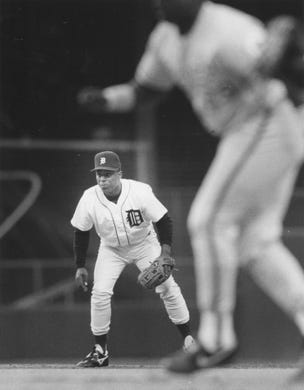 Detroit Tiger Lou Whitaker waits for the play during a game against Minnesota in May of 1992. The Detroit News
Fullscreen
A three section photographic panel of Lou Whitaker at bat in game one of the World Series between the Detroit Tigers and the San Diego Padres at Jack Murphy Stadium in San Diego, October 9, 1984. The Detroit News
Fullscreen
Second baseman Lou Whitaker applies the tag on the Minnesota Twins' Greg Gagne in an Oct. 12, 1987 American League Championship Series in Detroit. Rob Kozloff, ASSOCIATED PRESS
Fullscreen 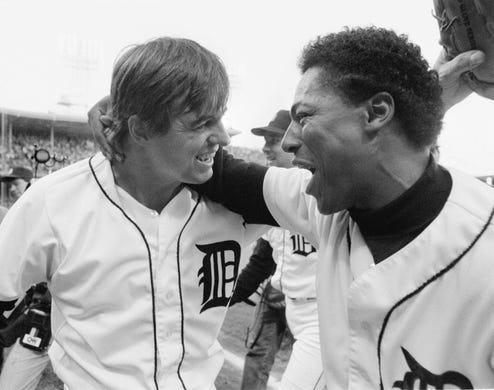 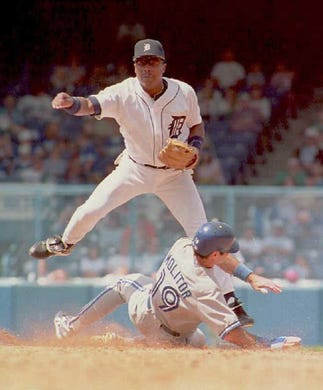 The Tigers' Lou Whitaker hurdles over Paul Molitor of the Toronto Blue Jays after turning the double play during the second inning of a game at Tiger Stadium in Detroit on May 20, 1995. It would be Whitaker's final season. MICHAEL SAMOJEDEN, AFP Photo
Fullscreen 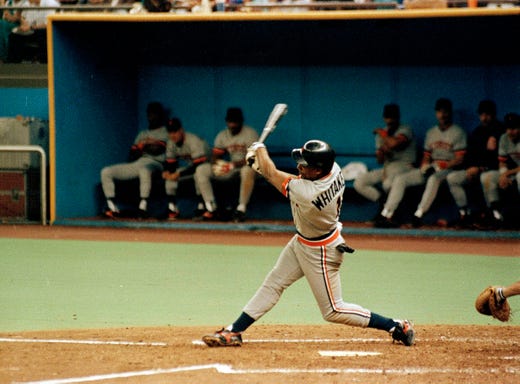 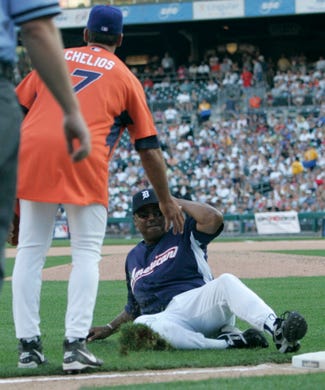 Detroit Tiger Lou Whittaker slides safely ahead of the tag by Detroit Red Wing Chris Chelios during the Legends and Celebrities game as part of the All Star festivities at Comerica Park in Detroit, July 10, 2005 Dale G. Young, The Detroit News
Fullscreen 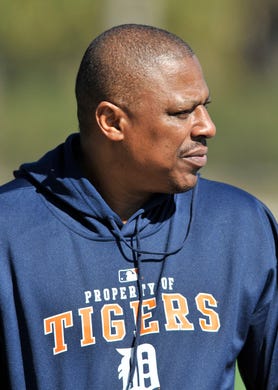 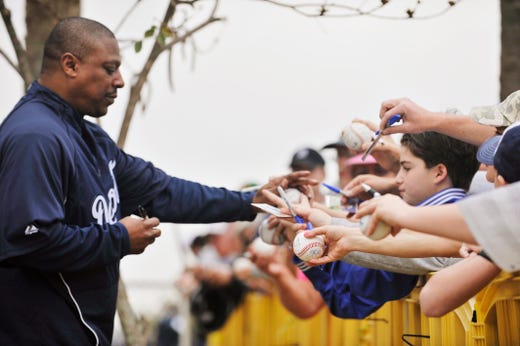 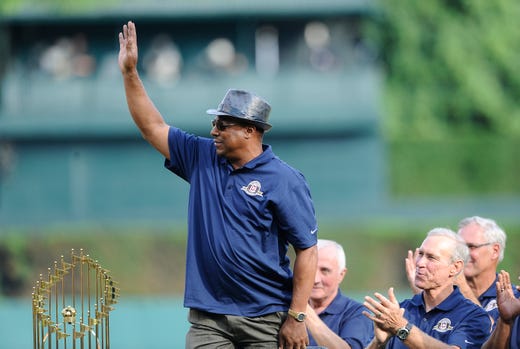 Former Detroit Tiger' Lou Whitaker waves to the crowd during a ceremony celebrating the 1984 Tigers before the start of a game against the Oakland Athletics at Comerica Park, June 30, 2014. Elizabeth Conley, The Detroit News
Fullscreen 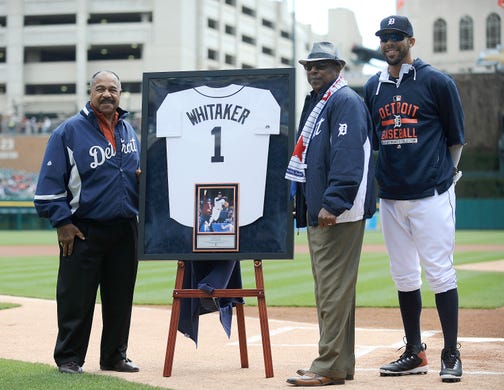 Will Horton, from left, Lou Whitaker and David Price pose in front of a Whitaker jersey as he received the African American Legacy Award in a ceremony before the Tigers played the Cleveland Indians at Comerica Park on April 24, 2015. Elizabeth Conley, The Detroit News
Fullscreen
Lou Whitaker congratulates his longtime double play partner, Alan Trammell, during a ceremony honoring Trammell and Jack Morris on Aug. 26, 2018 at Comerica Park, after their induction into the Baseball Hall of Fame. Will he be the next Tiger in Cooperstown? Robin Buckson, Detroit News
Fullscreen

On Sunday, the 16-member Modern Era Committee voted into the Hall of Fame Southfield native Ted Simmons, as well as late executive Marvin Miller, who among a long list of game-changing contributions built the Major League Baseball Players Association and created free agency.

Whitaker, in his first year of consideration on this ballot, got just six votes, six shy of the 12 needed for induction. The committee will not convene again until 2022. 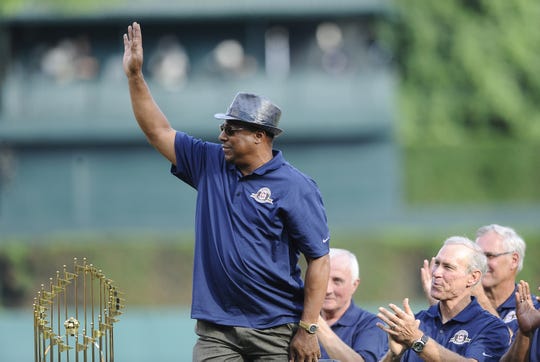 Whitaker got just 2.9 percent of the vote from the Baseball Writers Association of America back in 2001 and was removed from the BBWAA ballot.

Here's how the voting went:

Don Mattingly, Thurman Munson, Tommy John and Dale Murphy got three votes or fewer. Players with at least three votes will remain on the ballot in 2022.

More: Neither sellers nor buyers, Tigers could still make waves at Winter Meetings

Simmons, 70, graduated from Southfield High School in 1967 and was in the big leagues with the St. Louis Cardinals within a year. A switch-hitting catcher, he posted a career average of .285 with 248 home runs and 1,389 RBIs, playing for the Cardinals (he caught Hall of Fame pitcher Bob Gibson's lone no-hitter), Milwaukee Brewers and Atlanta Braves.

The eight-time All-Star played 21 seasons in the big leagues.

He is the fifth Michigan-born player in the Hall of Fame. He joins Kiki Cuyler, Charlie Gehringer, Hal Newhouser and John Smoltz.

Miller, a union leader who died at age 95 in 2012, revolutionized baseball by empowering players to negotiate multimillion-dollar contracts and to play for teams of their own choosing.

Miller led the MLB Players Association from 1966-82, a time when players gained the right to free agency after six seasons of big league service, to salary arbitration and to grievance arbitration. He led the union through five work stoppages and was an adviser during three more after he retired.

Both will be inducted into Cooperstown during ceremonies on July 26 along with any players chosen next month by the Baseball Writers’ Association of America from a ballot headed by former New York Yankees shortstop Derek Jeter.

Whitaker played second base for the Tigers for 19 seasons, accumulating 2,390 games between 1977 and 1995. He and Hall of Fame shortstop Alan Trammell became the most prolific double-play tandem in the history of the game, turning 1,918 double plays.

He was the American League Rookie of the Year in 1978 and earned five All-Star berths and won three Gold Gloves. His 6,653 career assists were sixth most by a second baseman.

Also, he has the highest WAR of any second baseman not enshrined in Cooperstown, his 75.1 WAR trailing only Rogers Hornsby, Joe Morgan, Nap Lajoie, Eddie Collins, Rod Carew and Gehringer.

And yet, a plaque in Cooperstown remains, startlingly, beyond his grasp. 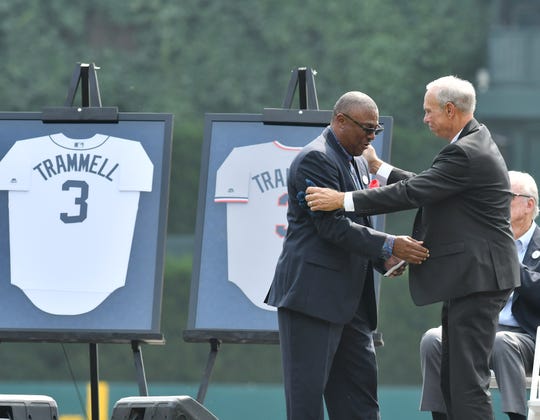 Lou Whitaker by the numbers