Right-hander Marcos Diplan, who never threw a pitch for the Tigers, was claimed off waivers by the Orioles.

San Diego — It remains to be seen whether the Tigers will make any deals this week, but they’ve cleared two additional roster spots in case they do. 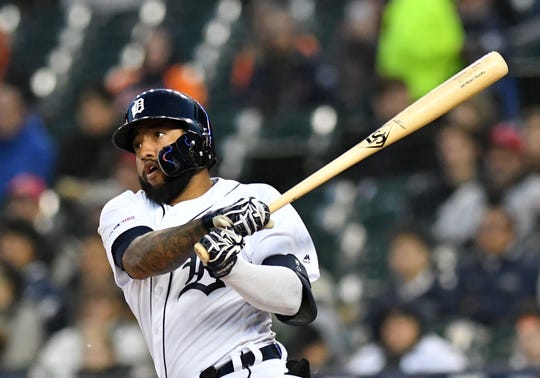 Rodriguez, who made his big-league debut with the Tigers in 2018 and was second on the team with 14 home runs in 84 games last year, was claimed by the Milwaukee Brewers. Rodriguez, known as El Felino (his rapper stage name) was an extremely popular presence in the Tigers’ clubhouse.

He hit .221 in 146 games over two seasons, but he also struck out 124 times, with 23 walks, in 500 plate appearances. The highlight of his time in Detroit came last August when he went on a six-home run binge, hitting .281 for the month.

Diplan, claimed from the Twins on Sept. 16 and never threw a pitch for the Tigers, was claimed by the Baltimore Orioles.

But it's not likely, general manager Al Avila said.

"If we take two guys, that means the second guy we feel real good about," he said. "We haven't finalized anything yet, but we have a very short list for the first pick and a very long list for the second pick."

Avila said the club was seeking to add a catcher, first baseman, corner outfielder, starting pitcher and possibly a middle infielder through free agency or trades.

'It's going to happen'

Tigers Hall of Fame shortstop Alan Trammell was getting on a plane at Metro Airport Sunday night when his phone rang. The caller ID read 'Lou.'

Lou Whitaker, the other half of the most prolific double-play duo in the history of baseball, was calling to say he did not get voted into the Hall of Fame by the Modern Era Committee Sunday.

Southfield native Ted Simmons and union executive Marvin Miller were voted in. Whitaker, needed at least 12 to get in, received just six votes.

"It's going to happen," Trammell said. "I wish it would have happened this time but I still feel strongly that it's just a matter of when."

That was the message Trammell relayed to Whitaker Sunday night. Whitaker will have to wait until 2022 for the next Modern Era Committee vote. Simmons, who got 13 votes, made it on his third try.

Former Tigers catcher Bobby Wilson is moving into the next phase of his baseball life.

After a 10-year playing career in the big leagues, with two stops in Detroit, Wilson has retired as a player and been hired to coach the Texas Rangers Double-A team in Frisco. “I’m really excited,” said Wilson. “I was getting tired of taking a beating and this is a great opportunity for me.”

…Third baseman Isaac Paredes, 20, rated the No. 5 prospect in the Tigers system, is making a strong showing in the Mexican Winter League. After struggling in the Arizona Fall League, Paredes is hitting .305 with 17 runs and 14 RBIs in 30 games. In 118 at-bats, he’s walked 12 times, been hit three times and struck out 10 times. He’s got five extra base hits, including a pair of home runs.