The Red Sox will promote from within when they eventually name the franchise’s next manager.

The Red Sox will promote from within when they eventually name the franchise’s next manager.

Per a Friday morning report from the Boston Globe, bench coach Ron Roenicke will be elevated to replace Alex Cora as soon as next week. The 63-year-old has previous experience with the Brewers, guiding the club to the National League Championship Series during his four-plus seasons with Milwaukee from 2011-15. 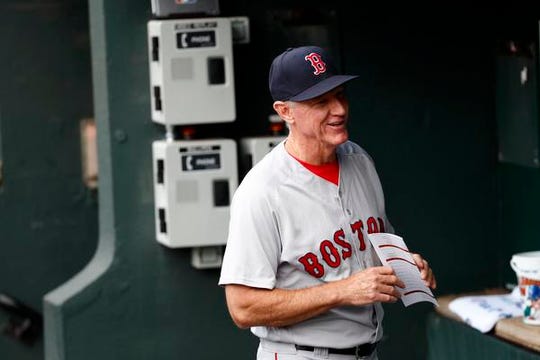 Roenicke was one of at least five candidates reportedly interviewed for the position, joining third base coach Carlos Febles, Athletics quality control coach Mark Kotsay, Diamondbacks bench coach Luis Urueta and former Blue Jays manager John Gibbons. The Red Sox declined to confirm whether or not they will formally hire Roenicke, saying their search is “not yet completed.”

Cora and Boston parted ways by mutual consent after he was implicated both in Boston’s alleged scheme and in the confirmed 2017 sign stealing caper perpetrated by the Astros, where he previously served as bench coach.

MLB Commissioner Rob Manfred said Thursday the investigation into the Red Sox is expected to be completed next week. It would be unnecessarily risky for Boston to formally name Roenicke its next manager prior to learning MLB’s findings. Cora is expected to be sanctioned covering his time with Houston and the Red Sox, and it’s unknown if any other members of the Boston staff will be subject to disciplinary action.

Baseball Commissioner Rob Manfred and the New York Mets say talks have ended over the proposed sale of a controlling share of the team from the families of Fred Wilpon, a Michigan alum, and Saul Katz to hedge fund manager Steve Cohen. The Mets said in a statement they intend to find another buyer.

... Outfielder Hunter Pence has agreed to a deal that will see him return to the Giants, according to sources.