Funkhouser has purged the negativity and looking to bounce back from his rocky 2019 season in Triple A.

Lakeland, Fla. — Before Alex Faedo. Before Matt Manning. Before Casey Mize and Tariq Skubal, there was Kyle Funkhouser.

A former first-round pick of the Dodgers who the Tigers drafted in the fourth round in 2016, Funkhouser carried the same oppressive weight of high expectations that this current batch of top prospects is carrying this spring.

He and Beau Burrows, first-round pick in 2015, were supposed to be anchoring the Tigers starting rotation by now. While Burrows is throwing bullpens on the back fields trying to fix some mechanical flaws in his delivery, Funkhouser, who turns 26 on March 24, has been converted to reliever. 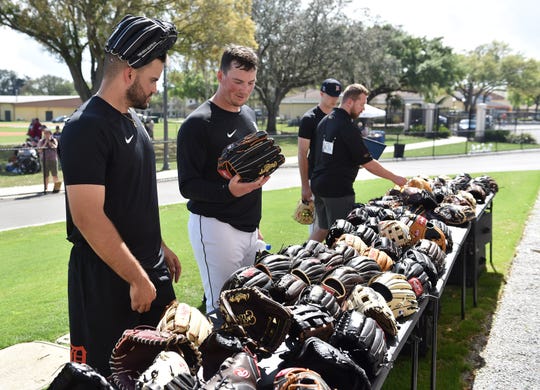 From left, Tigers pitchers Bryan Garcia and Kyle Funkhouser look over the gloves on display by Rawlings outside the clubhouse after the workout. (Photo: Robin Buckson, Detroit News)

“I had a couple of phone calls this off-season about my role,” Funkhouser said Friday morning as he sipped a cup of coffee. “They asked if I’d be willing to move to the bullpen. I said I’ll do whatever you guys think. You guys are the coaches, you are the professionals, the higher-ups.

Why not, indeed. Funkhouser labored through a nightmarish season in 2019. He suffered a deltoid injury early and never gained traction, even after he got healthy. The numbers were brutal — he posted an 8.53 ERA, a 2.1 WHIP and walked 54 in 63.1 innings in 18 starts.

“Just not consistent enough,” he said. “I’d have a pretty good start, then a bad start. You never knew what you were going to get. Just two extremes — go six innings and allow a run, or not get out of the first inning.”

The low point came July 1. The pitching-strapped Tigers had been discussing bringing him to the big leagues. General manager Al Avila made the trip to Toledo to watch his start against Columbus. Funkhouser blew up. He didn’t get out of the third inning and was tagged for seven runs on eight hits.

Worse, in his frustration, he left the park before the game was over and incurred the wrath of his manager Doug Mientkiewicz. Eleven days and two more rough starts later, Funkhouser was back in Double A.

“Mentally, I didn’t handle it very well, honestly,” he said. “We went back and watched film and tried to figure it all out and ended up over-analyzing it and trying to make too big of changes in-between starts instead of just stepping back and looking at the big picture.”

He was dominant at Double A and finished the season back with the Mud Hens. But it was the same, good start, bad start. He couldn't wait for the season to end — so he could get started fresh on 2020.

“I got down (to Lakeland) early and started working with the coaches,” Funkhouser said. “Just eyes on, you know? With offseason throwing, you are kind of on your own. The player is usually your best coach in terms of adjustments.

“But sometimes you don’t really feel things or see the bad habits. So I got down here early, got some eyes on me and tweaked some things.”

The biggest change was trying to stay back on his right leg a little longer and keep his front shoulder up through the delivery.

“I was getting down the mound too early and not really loading,” he said. “Since I’ve been down here, I’ve just been focusing on keeping my front shoulder up — that’s my cue. When I do that, I get a good load and everything is on time and the ball has been coming out a lot better, smoother, and I am able to repeat better.”

He’s pitched two scoreless innings this spring with a strikeout and no walks. He’s looked more confident and poised than he did at any point last season.

“Any pitcher will tell you, if you are on time and the ball is coming out good, you will take that,” he said. “If you get hit around or you lose command for a day or an inning, that happens. But last year, it was just all over the place.”

The phone calls this offseason and the request to move to the bullpen may have been a slight blow to his ego, but they also reassured Funkhouser that the Tigers hadn’t given up on him. They still believed he has a chance to contribute at the big-league level.

“I’ve been throwing longer bullpens and I think I will be able to get some two-inning outings,” he said. “I think they see me as a longer-inning bullpen guy and maybe a double-header starter, who knows? I’m just open to getting to the big leagues and helping the team win.”