The Tigers were looking at a 2020 season already curtailed as spring and regular-season schedules were either canceled or set for later resumption because of a coronavirus pandemic.

Professional baseball, college baseball, prep baseball — a single game, and the world at-large, were left Thursday with questions that begged for answers.

The Tigers were looking at a 2020 season already curtailed as spring and regular-season schedules were either canceled or set for later resumption because of a coronavirus pandemic.

The chance that college and prep teams might also lose portions, or perhaps all, of their spring schedules was among issues that on Thursday had not come close to being resolved.

The crimped or jettisoned schedules stood to affect the Tigers in another pivotal manner: the 2020 draft, set for June 10.

Scouts for all big-league teams are at work inspecting and evaluating talent for the 2020 draft. How those players comport themselves at college and prep games is the basis on which serious, franchise-influencing decisions are made.

Will college and high-school stars have any choice but to play, at best, intra-squad games, or perform during workouts for big-league scouts, should their schedules be canceled?

Will the coronavirus infiltrate these same players and impact their performances for an extended period?

Nothing was clear Thursday. Nothing of any finality may be known for days, weeks, or perhaps months.

All scouts can do is take in performances that haven’t yet been scrubbed, and rely on notes already taken.

The top players set for 2020’s draft, through the past week, nonetheless aligned in something akin to this order:

►1. Spencer Torkelson, Arizona State, 6-foot-1, 220, 1B: He was 4-for-10 last weekend against Fresno State, with a customary four walks. No home runs, but Torkelson doubled. So it is very much status quo for a hitter who isn’t ready to be displaced from any draft top-spots. Last week’s rank: 1

►2. Asa Lacy, Texas A&M, 6-4, 215, LH starter: Lacy last Friday sunk his teeth, and big left arm, into New Mexico State, which was not an evening the home team enjoyed. Lacy went seven innings, allowed the Aggies not a single hit, all while striking out 13 and walking two. If you’re a big-league team searching for pitching in this year’s draft — and even if you’re not — Lacy could be your man in June. Last week’s rank: 2. 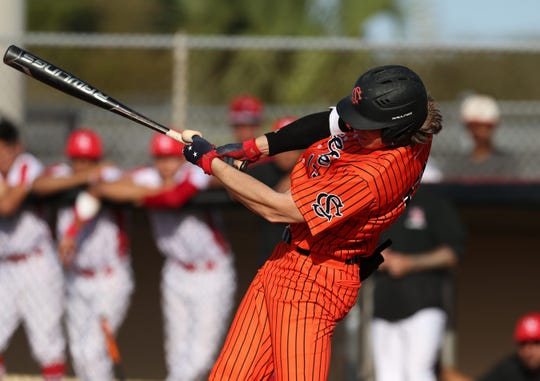 ►3. Zac Veen, Spruce Creek High, Port Orange, Florida, 6-4, 195, OF/1B: He not only has a left-handed bat that looks as if it could be confiscated as a piece of illegal weaponry, he has that size scouts so love. He is the week’s biggest climber, although Veen is no stranger to students of the 2020 draft terrain. Last week’s rank: second 10.

►4. Emerson Hancock, University of Georgia, 6-4, 213, RH starter: Bear in mind, Hancock pitched last Friday against Massachusetts, which is not to be confused with SEC stock that Hancock and Georgia normally confront on a given weekend. But it's not like Hancock took a vacation:  7 1/3 innings, three hits, zero runs, 12 strikeouts, no walks. He did his job, with aplomb. Last week’s rank: 6.

►5. Austin Martin, Vanderbilt, 6-foot, 170, OF/IF: We’ll see how long Martin’s hamstring leaves him on the shelf, which is where he found himself last weekend after getting hurt. Early reports were Martin’s hamstring strain was on the mild side. But as anyone familiar with baseball and hamstrings will attest, this can be one miserable, and scary, disability.   Last week’s rank: 5.

►6. Garrett Crochet, University of Tennessee, 6-6, 218, LH starter: Finally, Crochet’s once-tender arm had toughened sufficiently to allow him a 2020 debut. He was fine, tossing against Wright State: 3 1/3 innings, two hits, six strikeouts, no walks. The Vols are being easy with Crochet, which is conscientious of them. Crochet, on the other hand, is not — and likely will not be — letting up on any of his high-90s gas in coming games. Last week’s rank: second 10.

►7. Nick Gonzales, New Mexico State, 5-10, 190, 2B: He did not enjoy himself in any undue ways last weekend at Texas A&M. And that might accurately be a product of facing, yes, SEC pitching, which is substantially above a grade any other conference sees. Gonzales was OK, but just OK: 3-for-10, with three strikeouts, and three walks. And, news bulletin: No home runs. Last week’s rank: 3.

►8. Heston Kjerstad, University of Arkansas, 6-3, 205, OF: Kjerstad, in 16 games for the Razorbacks, has a nice little 1.304 OPS going, with six home runs, and only nine strikeouts. He plays right field, and with his left-handed crunch, Kjerstad, who has been dazzling since his freshman year, is but one reason bats figure to be big in 2020’s early draft. Last week’s rank: Unranked.

►9. Zach DeLoach, Texas A&M, 6-1, 210, OF:  Scouts aren’t sure if DeLoach can stick in center field. But they’re not overly concerned when his left-handed stick is making a big junior-year impression. DeLoach in 18 games is batting .421, with three — three! — strikeouts, six homers and a 1.336 OPS. Last week’s rank: Unranked.

►10. Pete Crow-Armstrong, 6-1, 175, Harvard-Westlake High, Sherman Oaks, California, OF/P: Very smooth, very poised, for a teen, with all the traits that make him a pure center fielder. He’s also pure Hollywood: His parents met as actors (his mom was Ashley Bennet on “Heroes”), although both now are teachers. Pete’s a good enough student that Vanderbilt has his commitment. But June's draft is likely to change plans there. Last week’s rank: Unranked.