Former Tiger Shane Greene won a nine-pitch battle with Miguel Cabrera, striking him out with a 3-2 slider.

With Major League Baseball suspending spring training games Thursday, the Tigers ended their Grapefruit League season with a 5-3 loss to the Atlanta Braves in a sparsely populated Joker Marchant Stadium. 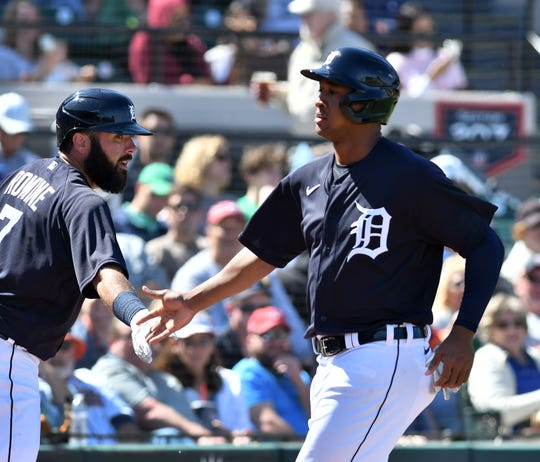 A solo home run by Braves minor-leaguer Riley Unroe, on a 96-mph fastball by Tigers closer Joe Jimenez, broke a 1-1 tie in the seventh.

The Braves scored three times off reliever Jose Cisnero in the ninth.

Jonathan Schoop, the Tigers new second baseman, whacked his first home run of the spring off Braves starter Kyle Wright leading off the second inning. The Tigers managed just one other hit off Wright, a single by Miguel Cabrera.

The Tigers added a pair of runs in the bottom of the night, getting RBI singles from Harold Castro and Eric Haase.

Spencer Turnbull made his fourth start of the spring and it was labor-intensive. He needed 63 pitches to get through three innings. Still, he came out of it unscathed, despite two walks, a hit-batsman and two singles.

His fastball touched 98 mph and sat at 96, his cleanest inning was an 11-pitch second where he was throwing mostly four-seamers at 94 mph.

Rule 5 right-hander Rony Garcia had his best outing of the spring, pitching two scoreless innings, allowing only one single with two strikeouts. His fastball was sitting at 94 mph, but he was getting a lot of bad swings with a late-biting slider.

Right-hander Bryan Garcia got himself in trouble with a couple of walks in the sixth inning, which set up an RBI single by Shane Robinson.

Lefty Nick Ramirez, who is in camp as a non-roster invitee, kept himself in the mix for a bullpen job with another clean inning. He struck out two.

The game also featured an entertaining at-bat between Cabrera and former Tigers closer Shane Greene. With a runner on third and two outs, the two engaged in a nine-pitch battled. Greene got ahead, then Cabrera worked the count full.

After fouling off a couple of wicked sliders, Cabrera couldn't hold up.