Thursday's baseball: Contract takes a back seat for Lindor

Francisco Lindor didn’t want to discuss money or his future. This certainly wasn’t the time.

Thursday's baseball: Contract takes a back seat for Lindor

Just days after the four-time All-Star shortstop and Gold Glove winner broke off talks with the Cleveland Indians about a long-term contract extension so he could focus on an upcoming season now further away, Lindor spoke passionately Thursday about hope and humanity. 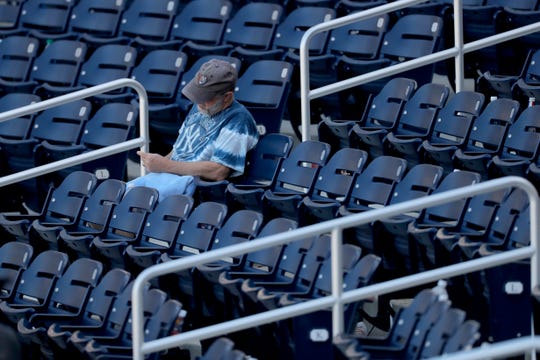 A lingering fan sits behind home plate after a spring training game between the New York Yankees and the Washington Nationals. (Photo: Julio Cortez, AP)

“It kind of seems like the contract thing is very little compared to what’s happening,” Lindor said. “Hopefully, we can get through this situation we’re going through right now. To all the people with health issues, the contract doesn’t matter.”

Earlier this week, Lindor suspended negotiations with Cleveland, which would like to sign the 26-year-old but may have no other option but to trade him later this season.

Team president Chris Antonetti said the club made an “earnest effort” to reach an agreement with Lindor before the sides tabled their talks.

Lindor has been open about a willingness to stay with the Indians, but any personal business has become secondary in light of the pandemic.

The Indians were scheduled to open the season at home on March 26 against Detroit. Now, everything is on hold.

The new reality has hit Lindor hard, and made him appreciative.

“We are talking about what’s going on in the world a lot,” Lindor said. “Everybody is bringing something different about it on Instagram or twitter. Everybody is concerned. Everybody is trying to be safe.

“It could get tough. We realize it could affect everyone of us, no matter who you are.

“You continue to do all the things that prevent it. You pray for the people that have it.”

The recent events have affected Lindor, who hopes that some good can come out of a bad situation. He’s mindful that lives are at risk.

“We hope we can find something that will stop this,” Lindor said.

Baltimore Orioles star slugger Trey Mancini underwent surgery Thursday to remove a malignant tumor from his colon. The tumor was discovered last week during a colonoscopy, team officials said. Lab results and the timetable for Mancini’s recovery will not be known until next week.

... Washington pitcher Max Scherzer, the former Tigers ace, was pleased with his first bullpen session after being scratched from a scheduled start. “It was good, was able to throw all pitches,” Scherzer said Thursday, before MLB decided to push back the season.