McCosky: Fear and self-loathing in Lakeland: I just want to go home and hug my kids, grandkids

For 33 days we produced two, three sometimes four stories a day. Which is now like vaporized history.

McCosky: Fear and self-loathing in Lakeland: I just want to go home and hug my kids, grandkids

Lakeland, Fla. — At about 7:30 Thursday morning, I was walking into the Tigers administrative offices at TigerTown with general manager Al Avila.

“Surprised you aren’t wearing a hazmat suit,” I said. 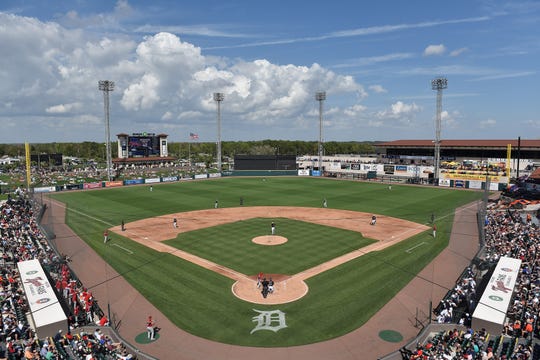 Spring training has been halted because of the coronavirus pandemic. (Photo: Robin Buckson, Detroit News)

Shortest shelf life for a joke ever.

By 4 p.m., spring training was over. All games canceled. The start of the regular season delayed indefinitely as the world fights the COVID-19 pandemic. Stick that in your hazmat suit.

I’ve been through some crazy days in this business. I saw people hoarding canned goods and toilet paper and listened to them talk about building survival bunkers in their back yard, then sat in my living room waiting for some cataclysmic occurrence as the clock approached midnight on Dec. 31, 1999.

I was on a bus with Rick Carlisle, Jerry Stackhouse and Chucky Atkins in September 2001, the Pistons caravan, on our way through Grand Rapids up to Grand Traverse, when late public-relations boss Matt Dobek said a plane just flew into the World Trade Center.

I was literally in the middle of the Malice at the Palace in 2004. I can still remember Jamaal Tinsley running through me like he was a spirit. I was in Toronto when people were in near-panic over the bird flu. Then it was SARS and MRSA.

But this seems different. I can’t shake this hollow feeling in my chest. It’s been a long time since I’ve asked myself questions like, What’s the point? At least not about what I do for a living. But I’ve been asking that a lot since Thursday.

Finally I just stopped. Like, what the hell am I doing? Even if the season started on time, the events of that game would be negligible. Given that the season was about to be shut down, it was literally inconsequential.

I think back and wince, too, at what a bad spot we put Matthew Boyd in that day. Unwittingly, for sure. It was Thursday morning, before anybody knew there would be a shutdown. We asked to speak to Boyd — we couldn’t ask ourselves because we’d been banned from the clubhouse all week — because he’s the Tigers’ player representative.

And being responsible as he is, he came out and talked to us. He honestly didn’t think there would be a shutdown. He expected, at worst, a two-week layoff then games would resume, possibly without fans. But, he thought, as has been the case in other national crises, that baseball could bring diversion and comfort, even it was limited to television broadcasts.

He also talked about not living his life in fear and about how the virus didn’t generally impact able-bodied people — which I am sure he regrets now. But he, like most of us, didn’t fully understand the full impact of this virus at that time.

So, the story with his comments got posted and a few hours later everything was changed. Boyd talked after the shutdown was announced, sheepishly saying, “Well, I guess I was wrong.”

Still, there were people on Twitter who criticized Boyd, and that made me sad. Some tried to paint him as a rich, entitled American, which, if you know anything about him is laughably wrong. This is about as devout a Christian as I know. This is a man who along with his wife have built a charity to save children from sex trafficking in Uganda.

We just put him in a bad position. I feel sick about that. Thankfully, he was able to laugh about it after.

Look, I know the travails of baseball and baseball writers are as inconsequential right now as charting pitches in a spring training game. But we are still putting out a sports section, still posting stories on the web site. We still have a job to do. And I have to ask, what do we do now?

There are baseball stories to write, but if the season isn’t going to start until June, what’s the point? Everything that we covered from the beginning of February through last Thursday is essentially null and void. All the camp trends, who’s hot and who’s not, all the position battles that were about to shake out, poof. Gone. The slate is wiped clean.

It’s like we covered a month and a half of a vaporized history.

And as I wrestle with all this, I get this email (I am not going to reveal his name) from, apparently, a reader:

“The best thing for any sport is for media to not be involved.  You are not there for the betterment of the sport. All you want is to break it down. The media is a laughing stock. No one trusts you anymore.”

Really? Is that what I do? Is that why I was up at 5:30 every morning for 33 straight days (I counted), trudging over to the park, writing two and three, sometimes four stories a day to keep fans and readers apprised of everything that’s going on with this team?

Does that make me an untrustworthy laughingstock?

I go back to my original question. What’s the point?

Back to Thursday, the day spring training died: I was on the field watching batting practice. Jim Leyland came over and we chatted for a while about all this craziness. At one point he asked me, “You still love this, right?”

But right now, while this insanity reigns, while I am sitting here praying the airlines don't start canceling domestic flights, I just want to go home, spend time with my three grown kids and hug my two grandkids for about a month straight.