Hardy was a non-roster invitee to Minnesota Twins spring training camp where he was trying to win a bullpen spot.

Former Detroit Tigers left-hander Blaine Hardy will be sidelined until 2021 after undergoing Tommy John surgery last week, according to Phil Miller of the Minneapolis Star Tribune.

Hardy, 33, who was released by the Tigers in October, was a non-roster invitee to Minnesota Twins spring training camp where he was trying to win a bullpen spot. Major League Baseball shut down camps March 12 due to the coronavirus threat. 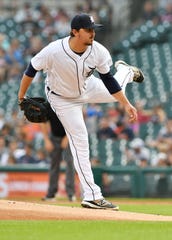 Well, the cat is out of the bag. We're hopeful that this surgery remedies the lingering elbow issues that Blaine has battled through over the years. And we can't wait for 2021... and 2020, of course (if it happens). #missingbaseballhttps://t.co/iHJjfL7SnN