The Tigers even have their own, first-in-line reservation when the second through fifth rounds of the 2020 MLB Draft convene at 5 p.m.

Go through the gallery for a closer look at Arizona State star Spencer Torkelson, who is the Tigers' No. 1 pick in the 2020 MLB draft. Arizona State University athletics
Fullscreen 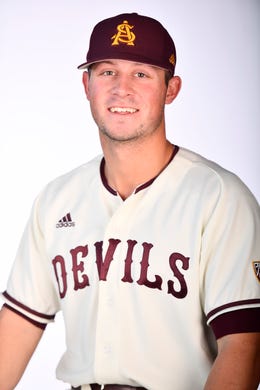 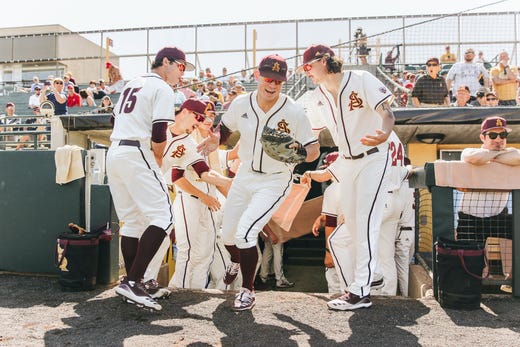 Spencer Torkelson of Arizona State is considered the No. 1 prospect in the 2020 MLB draft from such outlets as Baseball America, MLB.com and D1Baseball.com, among others. Arizona State University athletics
Fullscreen

If selected No. 1 overall, Spencer Torkelson would be the first right-handed first baseman to be taken with the top pick in the history of the draft, and just the third first baseman overall. Rick Scuteri, Associated Press
Fullscreen 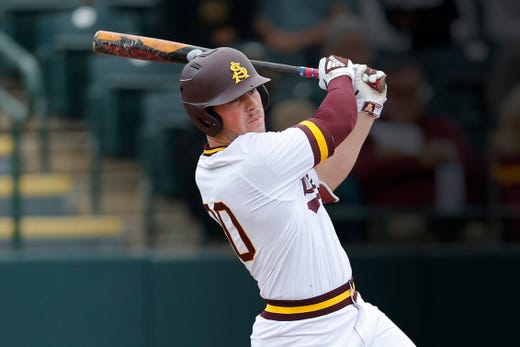 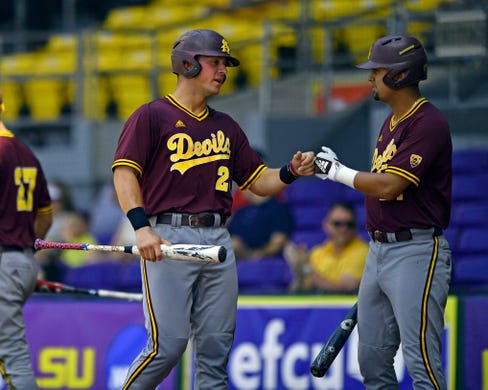 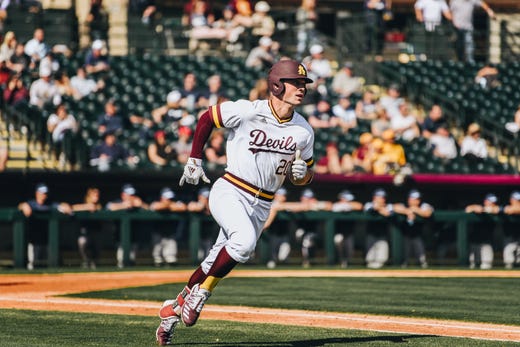 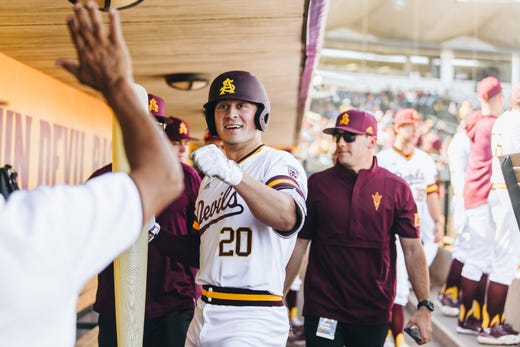 With 54 home runs in two-plus seasons at Arizona State, Spencer Torkelson was closing in on Bob Horner's school record of 56 when the season was shut down because of the COVID-19 pandemic. Arizona State University athletics
Fullscreen 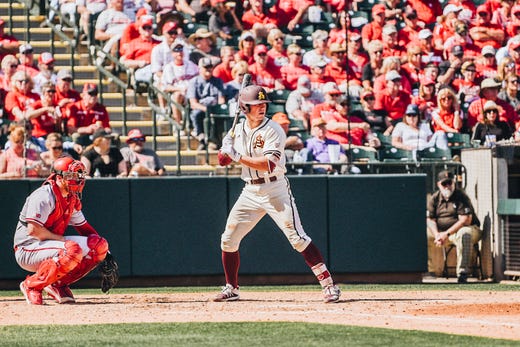 As a freshman in 2018, Spencer Torkelson was a semifinalist for the Golden Spikes Award, given to college baseball's top player. Arizona State University athletics
Fullscreen 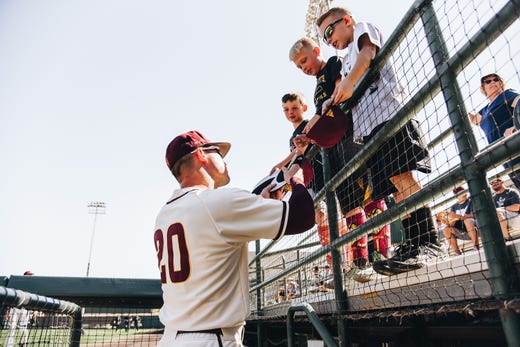 Though he plays first base for the Sun Devils, Spencer Torkelson's coach, Tracy Smith, and scouts have said he's capable of playing a number of positions in the infield and outfield. Arizona State University athletics
Fullscreen

For the Detroit Tigers, it will be a little like 5 a.m. on past Black Fridays, when folks have lined up to lay hands on the best and earliest shopping bargains available.

The Tigers even have their own, first-in-line reservation when the second through fifth rounds of the 2020 MLB Draft convene at 5 p.m.

That first pick of the evening, at No. 38 overall, is Detroit property, just as the Tigers had first turn Wednesday and seized Arizona State basher Spencer Torkelson.

But Thursday night’s decision is all but certain to be less clear, less definitive.

Do the Tigers follow their at-large strategy in 2020 and go for the bat and position help they need more urgently than arms? Do they put a hammer-lock on LSU outfielder Daniel Cabrera? Move to fill their deep organizational crevasse at shortstop by opting for Casey Martin, even if Martin’s bat is, well, like a lot of past bats the Tigers have hoped would be more than they ultimately became?

Or, do they go for that Tigers golden oldie, pitching, which offers all sorts of enticing targets for a team set to choose the ostensibly 38th-best baseball prospect in America?

But understand this year’s picks carry inordinate risks, all because a pandemic decided to wreck amateur baseball’s spring and reduce this year’s MLB draft to five rounds.

The Tigers have five picks Thursday spanning rounds two through five, including a compensation selection at No. 62 overall, wedged between the second and third rounds.

As the Tigers debate, discuss, or refine thoughts on who they’ll target with pick No. 38, it is known that in the event of any jump-balls – any relative ties between pitchers and position players on the Tigers draft board – they will go for the bat. Such are a team’s needs on offense that the hitter will prevail.

But that’s perhaps unlikely, all because pitching is a heavier presence on Day Two of the 2020 draft and offers a better chance at securing a talent the Tigers might well decide is a difference-maker.

Among the deep cast of contenders for that first pick Thursday:

►Daniel Cabrera, LSU, 6-1, 185, left-fielder, age 21: Here is a left-handed hitter who could be the answer to a team’s various organizational ills. Cabrera can hit, first and foremost, and he most certainly plays a more secure left field than does the current presumed tenant, Christin Stewart. Cabrera keeps his swing simple and crisp. He laces line drives and can honest-to-gosh recognize pitches and spin differentials.

He also is from LSU and the Tigers have something of a kinship with the gang from Baton Rouge. Cabrera is as close to a favorite as perhaps exists heading into tonight’s 38th turn. 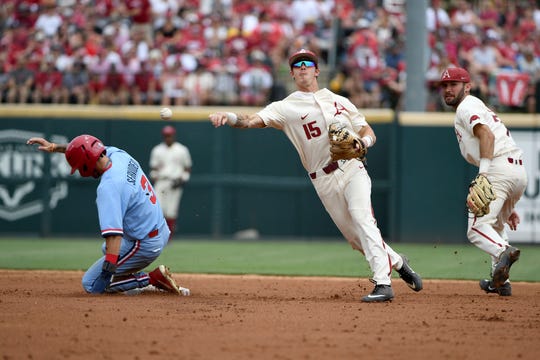 ►Casey Martin, University of Arkansas, 5-11, 175, shortstop, age 21: It looked for a while Wednesday as if Baylor’s Nick Loftin just might sneak into that 38th spot and into the Tigers’ waiting arms.

But the Royals smothered Loftin at 32, and when Alika Williams of Arizona State was harvested by the Rays at 37, the Tigers were looking – seemingly – at Martin as their next-chair college shortstop.

He is a fine overall athlete. But there are (shudder) concerns about his bat and about strikeouts. Thus, Tigers draft followers familiar with past decades of draft-day casualties at shortstop understand Martin’s profile spurs dark memories. If he’s the choice at 38, step outside your pandemic-isolated abode and listen for the distant sounds of howls and pained yelps from Tigers fans experiencing dreadful flashbacks.

►Freddy Zamora, University of Miami, 6-1, 190, shortstop, age 21: This would be one interesting move by the Tigers were Zamora to be the first name unveiled Thursday. The problem is 2020. It wasn’t coronavirus that ended Zamora’s season. It was a torn-up knee, a practice-field mishap, just before Miami’s 2020 schedule was cashed in.

A shame, because Zamora has size, and a bat, and a splendid glove. Even with a knee on the mend, the Tigers could decide a shortstop with Zamora’s inventory is too good of an investment. That is, if doctors say the knee is healing.

And yet there are aspects of Zamora’s draft file that are as scary as his knee. He was suspended just before getting hurt because of a team violation that remains yet a mystery. The Tigers will have done their research there, but unless they’re getting lots of reassurance on all ends, Zamora likely is a longshot. 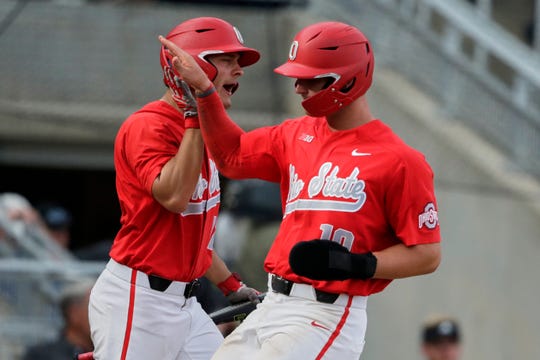 ►Dillon Dingler, Ohio State, 6-3, 210, catcher, age 21: Here was one of Wednesday’s deeper curiosities: Why wasn’t Dingler grabbed in those first 37 picks? He’s a catcher, with size, and an arm and a big right-handed bat. He had sturdy numbers as a sophomore for the Buckeyes and he had started smartly in 2020 before COVID-19 made its dastardly descent.

But something weird seems to have thwarted Dingler’s seemingly certain first-round plans. The suspicion is that Dingler, because he plays in the Midwest’s snow plains, simply has offered scouts too little to go on when other, safer and more plentiful scouting data exists.

Nonetheless, Tigers snoops might have seen enough to convince them Dingler would be a dandy in Detroit.

►J.T. Ginn, Mississippi State, 6-2, 192, RH starter, age 21: Never mind that he’s presently shaking off Tommy John surgery. The Tigers have for years been in various stages of courtship with Ginn and still love that near-100-mph fastball and vicious power slider he uses to bludgeon hitters.

What isn’t clear, publicly anyway, is whether a man who two years ago turned down a first-round invitation from the Dodgers would opt for second-round status in 2020. (He is draft-eligible as a 21-year-old sophomore.)

The Tigers would need to be sure, as much as any team can be sure, that the Tommy John repairs are on schedule, and that Ginn would be inclined to do in 2020 what he didn’t do with the Dodgers two years ago. Chances there, it seems, could be on the dark side.

►Clayton Beeter, Texas Tech, 6-1, 205, RH starter, age 21: Probably because they tend to be abundant, the Tigers have a deep ardor for Texas pitchers, particularly on the college side. Beeters qualifies as one of those Texas plowhorses who throws hard, is thick of body, and all but guarantees long years as a durable rotation regular.

Of course, that’s the way they all look, whether from Texas or anywhere on the college terrain. Beeter might have pushed himself into grab-him-now status had the pandemic not ruined things. It all depends on what scouts saw before this spring, and what the analytics numbers-crunchers say today. But he fits past Tigers job descriptions. 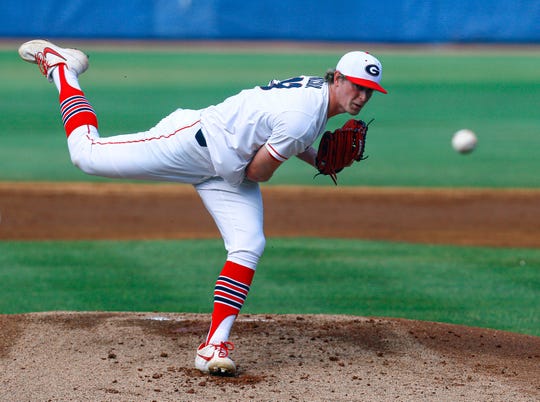 ►Cole Wilcox, University of Georgia, 6-5, 232, RH starter, age 21: Oh, he has all the big-print and fine-print features you want in a starter: a full-throttle fastball to match his size, a nice batch of accompanying pitches, all the right specs.

The hang-up is that he, like Ginn, is a draft-eligible sophomore. With the kind of blowtorch repertoire Wilcox has, do you want to take that pandemic-restricted 2020 check, with its limit of $100,000 up front, and limited deferred money coming your way the next two years, or do you wish to trust yourself and bank on your upside and simply wait for 2021?

The answer seems obvious. The Tigers likely got Wilcox’s response well ahead of Wednesday, which might also explain why he remains undrafted on Thursday.

►Chris McMahon, University of Miami, 6-2, 205, RH starter, age 21: How many people remember Seth Greisinger, a University of Virginia star the Tigers snagged in the first round of their 1996 draft?

Well, meet Greisinger’s facsimile, McMahon, who throws a variety of pitches somewhere in the neighborhood of Greisinger’s serves. While there’s nothing overpowering about McMahon’s arsenal, he tosses quality stuff – a wide variety of it – with command.

This is the kind of pitcher who tends so often to find his way into the Tigers’ chain. It was that way during Greisinger’s time. It could be an old tradition repeated by McMahon.

►CJ Van Eyk, Florida State, 6-1, 205, RH starter, age 21: Much like McMahon, if the Tigers opt for a pitcher such as Van Eyk – even given their penchant for college arms – it would indicate they are down, very down, on the hitter options available at 38.

Van Eyk is a nice pitcher. A nice back-end pitcher. And those starters are vital, for sure. But is that the brand of roster piece you inject into a farm system starved for bats?

No. Not unless the scouts’ notebooks and the video and whatever projections the analytics’ computers spat out indicate something about Van Eyk that otherwise wasn’t obvious.

He has everything you want in a prep starter, which of course is a package that comes loaded with disclaimers:

Think for a moment about Beau Burrows, who was a big, robust Texas prepster and seeming rock-solid Tigers rotation piece who five years later still hasn’t cracked the big leagues.

Think of Brandon Hamilton and Nate Cornejo and all sorts of prepsters who looked like early-round gold and who turned into corn husks, leaving the Tigers to wish they had looked elsewhere with that prized pick.

Kelley would make sense in so many years for the Tigers. But this year, 2020, with too few picks over too few rounds, and when the bat rack needs guys who can approach it with mayhem in mind?

Not likely. Not by any seemingly realistic rationale.

Then again, this is baseball. And this is the draft. And be prepared Thursday for things that don’t necessarily make sense to anyone but experts who have their jobs for a reason.