Whether in Detroit-Toledo or Lakeland, Ron Gardenhire says Tigers will be ready to work

Whether in Detroit-Toledo or Lakeland, Ron Gardenhire says Tigers will be ready to work

Detroit — It’s heartening to know that as Major League Baseball and its players continue to haggle over the size and structure of an ever-shrinking, ever-endangered 2020 baseball season, Tigers manager Ron Gardenhire’s sense of humor remains laser sharp.

“I told my wife, this may be the only year I don’t lose a game as a manager,” he said Monday from his home in Fort Myers, Florida. “You’ve got to look at the positives, right? It’d be a helluva record, not losing a game in my last year of managing.”

Gardenhire picked a bad time to be in a contract year. He and others like him (managers and players) are collateral damage in this prolonged shutdown. At age 62, he is in the last of his three-year deal with the Tigers. Same for his coaching staff.

And he was content to let the 2020 season play out and let the chips fall where they may. With a roster fortified by some veteran players — C.J. Cron, Jonathan Schoop, Austin Romine, Ivan Nova, Cameron Maybin — and a dynamic crop of young pitching prospects about to make their debuts, he liked his chances of earning an extension over a 162-game season.

But now? With a truncated 50-some game season?

“I don’t want it to end like this,” Gardenhire said. “Talking with my wife, we were fine with this being the last year of my contract. But I wanted it to be my last (full) year. I wanted to play baseball and if it went the other way where I was done, then I’m done and that’s OK.

“But I would really not like to end this way. But I won’t have enough say-so at the end of the day when we talk about all this. That’s a conversation for the organization, and myself and my coaching staff.

"We want a shot at this. We liked what we had in spring training and hopefully we can still get a little shot if they can figure this thing out.”

In the meantime, Gardenhire, quality-control coach Josh Paul and general manager Al Avila have been devising and revising spring training plans, at multiple sites. Despite cases of the coronavirus popping up in Clearwater, Dunedin and West Palm Beach over the weekend, and the league shutting down all spring-training sites in Florida and Arizona, Gardenhire said the door isn’t officially closed on having spring-training 2.0 in Lakeland.

“We’ve been working on all kinds of scenarios,” he said. “We are ready for spring training. We’re ready for multiple spring trainings, whether it be in Detroit or down here. They are closing the complexes to clean and sanitize them. They will open back up.”

Gardenhire said it was his and Avila’s understanding that the league is recommending teams hold their training camps in their home ballparks, but it’s not a mandate.

“Our best move would be to have spring training (at TigerTown in Lakeland),” he said. “You are talking about 60 players. Trying to do something like that in Detroit, in one stadium, it would be an all-day workout. I don’t think the guys would really enjoy that.”

Health protocols would limit the size of the workout groups, obviously. So smaller groups would rotate workouts throughout the day.

More: McCosky: Virus was always going to win: Baseball must access logical path to a healthy '21

“We could make it work, 60 guys at Comerica Park,” he said. “We would stagger it but think of the length of the day. We’d start at 7 a.m. with the young guys and the rookies — because they are the only ones who could get up that early (laughs) — and then you move forward.

“But you’re looking to put together a 30-man team and you’ve got to get those guys to have a feel for playing and working together, but you can’t have that many people out there.”Gardenhire said the Tigers have reached out to it’s Triple-A affiliate in Toledo and asked to use their facilities, as well.

“If their field was available then we could split it up — one group there and one group at Comerica,” Gardenhire said. “That’s something that’s viable and I think they’d be willing to do that. Wayne State’s facilities are there, too, but we’re affiliated with Toledo and they were excited when we threw it out there as a just-in-case.

“Because that’s all we’re doing. Everything is just in case.”

Presumably, Fifth Third Field could also be used to facilitate the taxi squad, which is expected to be some 20 players to supplement the 30-man initial regular-season roster. Gardenhire said the working plan right now is to start with 30 players on the active roster, then after a week pare it 28 and then finally to 26. 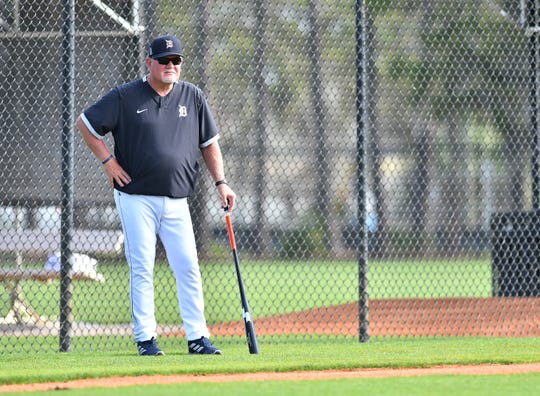 Tigers manager Ron Gardenhire has been spending his time grilling and watching game shows as he waits for the MLB season to start. (Photo: Robin Buckson, Detroit News)

Between the expanded rosters and taxi squad, the door is now open for the Tigers’ four top pitching prospects — Casey Mize, Matt Manning, Tarik Skubal and Alex Faedo — to be in the mix if there is a season.

“I’m not positive,” Gardenhire said. “But we’ve done different rosters and I think they are going to be part of the 60-man, for sure, and I would imagine on the taxi squad. Because you can’t just let them waste a year. We’ve already talked about that.

“You can’t have your top pitching prospects not have anywhere to pitch. They have to be somewhere at least playing intersquad games and then get some time in the big leagues. That was our plan initially anyway…Ultimately we’d like to get them some experience this year so going into next year they’re going to be locked and loaded.”

Gardenhire has done, in the most challenging and unprecedented situation he’s ever confronted, what he’s always telling his players to do — he’s controlled the things he can control. And given the continued uncertainty and ever-changing landscape, that’s saying something.

“The best thing we’ve done here is communicate,” he said. “We’ve had a lot of good conversations and trying to get it right. We are prepared for whatever they want to do so when they do this thing, we can take off flying and get her done quick.”