Hitting is Tigers prospect Bryant Packard’s ‘favorite thing to do,’ and it shows

That was some travelogue Bryant Packard put together last summer in his first nine weeks as a Tigers prospect.

Hitting is Tigers prospect Bryant Packard’s ‘favorite thing to do,’ and it shows

The minor-league season has been canceled, but the development of the Tigers' prospects is still a critical aspect of the team's rebuild. In this series, Lynn Henning will take a look at some of the key players. Today: Bryant Packard.

That was some travelogue Bryant Packard put together last summer in his first nine weeks as a Tigers prospect.

He signed on June 18, right after the Tigers grabbed him in the fifth round of the MLB Draft. Four days later he joined the Single A Connecticut Tigers, where, as is his habit, he got an instant base hit. 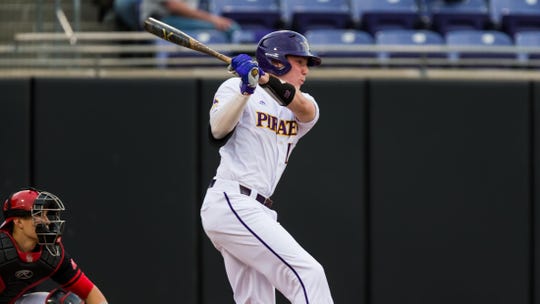 Bryant Packard was a fifth-round draft pick of the Tigers out of East Carolina. (Photo: ECUPirates.com)

Packard got nine hits in his first six games. He then got three more in his 11th game, by which time his bosses decided Packard needed to hit the road. To higher-rung West Michigan.

He lasted only 23 games with the Whitecaps, thanks to a .309 batting average and .898 OPS. That earned him a throw-to-the-wolves final week at Single A Lakeland, where he behaved more like a left-handed batter two months out of college: two hits in 17 at-bats.

“Yeah, I think it was my first game, a big-league rehab start for Jordan Montgomery (Yankees left-hander), and there’s shadows in front of the plate, and it’s 110 degrees, and pitching at that level was kind of a shock – but I loved it,” Packard was saying last week during a phone conversation from his home in Greenville, North Carolina.

“I actually hit a lot of balls hard during those five games, and I got a lot out of it. But, sure, I struggled, even if it was a small sample-size. Maybe it was a glimpse of reality. It kind of humbled me.”

Now for some bragging. It comes courtesy of Lance Parrish, who last season was Packard’s manager during those 23 games at West Michigan.

“He’s just a pure hitter,” said Parrish, who now works as a special assistant to Tigers general manager Al Avila. “He’s a Lou Whitaker in my mind, in that he shows up and knows how to hit. He’s got a pretty swing, he drives the ball to all fields, and he’s got very good bat control.”

Wunderbar. The needy Tigers can plan on plugging him into the lineup straightaway.

Besides needing to prove in a non-pandemic year that he can hit higher-gear pitching, Packard must find a position where he can survive.

At the moment, that’s the outfield – maybe. But minus speed, range, and anything special with his arm, there are complications for a man who is 6-foot-3, 195 pounds. Left field at Comerica Park is the size of a Kansas prairie and ideally demands a slick defender, which is why Christin Stewart is an endangered species as Tigers plans evolve.

There is another option: first base. Packard played first base and third base when he wasn’t pitching at Conley High in Greenville. It wouldn’t be the first time a left-handed slasher with less luster on defense dropped anchor at first.

“I think it would be to his benefit to play first base,” Parrish said. “If you’re comparing him to guys we have in the outfield, speed-wise, and who maybe have more raw athletic ability, he probably comes up a little short in those areas. 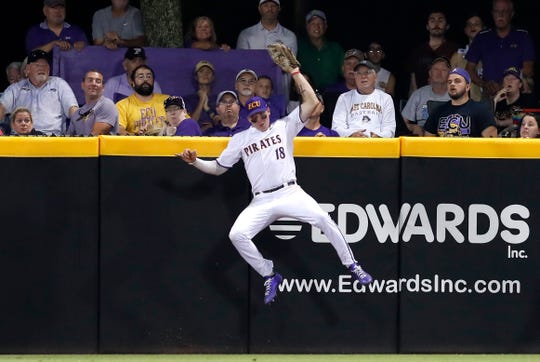 Bryant Packard has been an outfielder but could eventually move to first base. (Photo: Ethan Hyman, AP)

“But his strong suit is he’s a hitting machine. If he can find a position at first base, or improves a little in the outfield, great, because I know he’s going to play in the big leagues.”

This summer, Packard finds himself in baseball’s version of a jail cell. Like thousands of minor-leaguers, he’s living at his parents’ home, working out, trying his best to find live, challenging pitching to hit against, but batting mostly off tees or by way of machines. There are Zoom sessions with the Tigers’ development staff. They offer analysis from video and high-tech gadgets that track Packard’s swings.

It’s about all that COVID-19 permits. Maybe every two weeks or so, he’s able to scrape up at-bats against prospect-caliber pitching.

“There are a lot of minor-league guys around me,” Packard said, “but they all happen to be hitters. A couple of times I’ve almost said: ‘Hey, will you guys pitch to me?’

“But I’m not worried. I’ve gone months without hitting. It just kind of comes right back to me. As long as I’m focused, I’ll be OK.”

Those “months without hitting” factored into Packard sitting there a year ago in the fifth round. He had hurt his back while doing squat-lifts as a freshman at East Carolina and wasn’t able to pick up a bat for seven months.

He was on his way to maybe a second-round ticket in 2019’s draft. That is, until early that spring when he crashed into a left-field wall and jammed his wrist. Badly.

“I probably shouldn’t have played through it,” said Packard, who still hit .358 in 58 games, with a .994 OPS, but only seven home runs. “My average was kind of where I wanted it, but it was a lot harder to elevate the ball. I kind of had to hit with one hand. I felt a little like Tony Gwynn (late Hall of Famer) must have when he hit: just shoot balls here and there.”

Mention to Packard that his wrist issue sounds more like a fracture, and he says: “It might have been. I just didn’t want to get an X-ray. Ibuprofen worked just fine.”

If he seems to shrug at battlefield wounds, that’s his heritage – the military. His dad, John, was a career Navy man, which explains why Bryant was born in Seattle ahead of stops that led eventually to Greenville.

He played football during middle school – offensive MVP his two years as a quarterback and running back – then stuck with basketball (he was a 3, or 4, in basketball position parlance) and baseball at Conley High. Duke, the University of North Carolina, North Carolina State, and Virginia Tech all were interested. But the new baseball coach at ECU, Cliff Godwin, who had been assistant coach at the University of Mississippi, was an ECU alum and had a sales pitch that was pure fire.

More: Until the offense comes, Tigers' Candelario making winning plays with his glove

Packard signed on and two years later was American Athletic Conference Player of the Year.

Any major changes to Packard’s profile in 2020 are tied to his body. He’s gotten a dividend from all that fish, chicken, and vegetables he’s now downing as opposed to older, more traditional diets enjoyed by 20-somethings: burgers, pizza, Mexican food, with of course some sugary delights mixed in.

“This offseason – if you want to call this year an offseason – I’ve lost 15 pounds and completely changed my diet,” Packard said. “And I’m moving better. For the first time in my life I’m focusing on things other than hitting, trying to be the all-around player teams want.”

Normally, he can scrape up enough partners to work on his defense. He’ll take fly balls and work on his outfield routes, then switch to first and third base and reacquaint himself with ground balls he took by the bushel during his prep days. 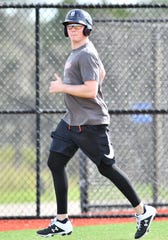 The Tigers are working with Bryant Packard as he remains sidelined from game action during the minor-league shutdown. (Photo: Robin Buckson, Detroit News)

He acknowledges the Tigers “have about eight third basemen” fighting for big-league work, which has made clear that first base might be his best non-outfield option.

He also would have loved making the 60-man taxi squad the Tigers convened last month at Detroit and Toledo. But he understands that more polished players at Double A and Triple A meant numbers were going to be tight.

“We actually pushed him a little last year,” said David Littlefield, the Tigers’ head of player development. “We gave him a taste of higher-level pitching (Lakeland), a short spurt, because he’s very impressive. He’s hit his whole life, and he continued to hit last year.

“He’s a big, strong guy who’s likely to have some solid power in the future. And we think he’s going to be a solid defender. Sometimes a guy who has a good bat doesn’t get credit on defense, but he works at it, and he’ll put forth the effort.”

Littlefield paused and said: “You wish you had another just like him.”

Hitting a big-league pitch is the toughest trick in sports, as Packard agrees. But to him hitting is pure indulgence, “my favorite hobby,” he says. And when he speaks of his zeal for slamming a pitch, he brings to mind another man from baseball’s yesteryear who lived to swing a bat: Ted Williams.

Packard knows all about him. He’s read Williams’ book, “The Science of Hitting,” with its creed about getting good pitches you not only can hit, but drive.

“Yeah, Ted’s big thing was to be able to get your pitch and not miss it when it comes,” said Packard, who is such a student he knows about Williams’ two stints as a fighter pilot during two wars that cost him five years of big-league prime time. “He had one of the prettiest swings in history, but I’ve seen plenty of guys with terrible swings but who were always on time through the zone.

“That’s because they were very versatile with their swings and could work counts well. It’s about mechanics and building a foundation.

“Look at Cal Ripken,” Packard said, speaking of the Orioles Hall of Famer. “He changed his stance every game.”

It seems the hitting student is also a college student. Packard is taking four online classes this summer: music appreciation, kinesiology, a communications class, and another in abnormal psychology, which perhaps is an apt choice during a pandemic year. He’s a communications major who plans on finishing his ECU degree in two more semesters.

And then dig long and deep into the fun stuff.

►Tigers' Parker Meadows finding his swing, even with no minor-league season