Chevrolet's performance on road courses and at Indianapolis secured its status as the favorite in the Dual in Detroit.

Will Power, driver of the No. 1 Team Penske IndyCar, speaks with Penske employees in the garage area, Thursday May 28, 2015, amid preparation for the Chevrolet Detroit Belle Isle Grand Prix race activities. Steve Perez, The Detroit News
Fullscreen

Will Power speaks with Penske employees in the garage area. Steve Perez, The Detroit News
Fullscreen

Will Power poses for a photo with Penske employees in the garage area. Steve Perez, The Detroit News
Fullscreen 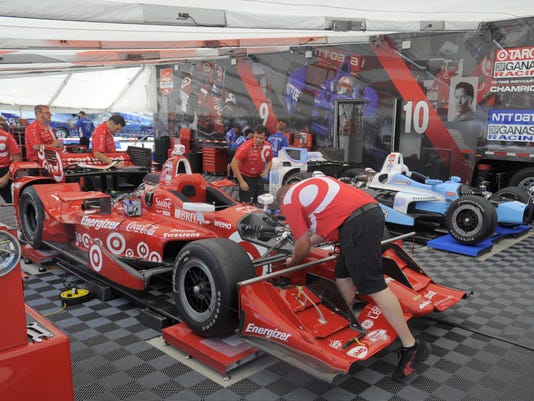 Detroit -- The IndyCar series comes to Belle Isle with the home team in a dominant position and the visitors seeking to improve.

Chevrolet's performance on the earlier road courses and the big oval in Indianapolis secured its status as the favorite in the only doubleheader on the schedule this season, the Dual in Detroit.

The other manufacturer in the field, Honda, is down but looking up, with a raft of good drivers hoping the equipment eventually allows them to compete better with the Chevrolets.

If drivers, owners and engineers know precisely how the Detroit manufacturer has gained the advantage over the Japanese, they are not talking specifics.

Those are the racing secrets.

But at this juncture, Chevy appears to have built a better new Indy car when the designs were allowed wholesale changes in the offseason. Maybe the Chevy power plant is simply more efficient.

Regardless, the big questions are:

■Does Honda eventually hit on some combination of changes that improve performance?

■If it happens, when will it occur during the season?

■And, is the substantially new track surface in Detroit — with 1.5 miles of new brushed concrete on the 2.3-mile circuit and wider openings to two key corners — just the place for something new to happen during the seventh and eighth races of the 16-race season?

"I think until Honda makes a big upgrade, they're not going to be competitive," said defending IndyCar Series champion Will Power of Team Penske, who along with teammate Helio Castroneves swept the two races on Belle Isle last spring for Penske and Chevrolet.

Power won the second race this season, the Indianapolis Grand Prix, on the road course.

"I tend to agree," said Josef Newgarden, who led 46 of 90 laps to win the Indy Grand Prix of Alabama on April 26 for CFH Racing and Chevrolet.

"I think the level of performance Chevrolet has is very strong. It's hard to close that deficit.

"But at the same time, Honda has performance, too. Graham Rahal's been surprisingly the best of everyone. They've done a really good job.

"But it's in there, you've seen that they have performance. It's just that it's been a hard time finding that performance when they need it, especially in qualifying.

"If they could unlock it quicker in the weekend, I think they'd be a lot closer."

Chevrolet has taken five of the first six races, with Honda victorious only from James Hinchcliffe for Schmidt Peterson Motorsports in the Grand Prix of Louisiana on April 12, the second race this season.

Of the top 10 drivers in the standings, eight drive Chevrolets.

Chevrolet also has won all six poles this season.

"And, you know, right now, we like where we are.

"What we've got to do is to take the same play book out we had last year, with Helio and Will," Penske said of the two wins in Detroit for the team in 2014, from Power and Helio Castroneves.

Takuma Sato, who drives for A.J. Foyt Enterprises in a Honda, acknowledged that Chevy drivers are gloating a bit as they get to the halfway mark in the series after Belle Isle.

But, Sato hopes for improvement

"I hope so," he said, standing sunbathed on the Detroit riverfront just before the annual media lunch. "But it's only hope.

"Honda will have some little updates this weekend. Obviously, they are mainly for safety concerns. But hopefully there's something in there for the performance because otherwise it's a little bit tough to make the most of it.

"The package, right now, is a little bit of a sensitive area."

If Chevy feels confident, it would be wise to rein in the triumphalism a bit. After all, this is motor sports, and on the tight, idiosyncratic road course on Belle Isle.

Meanwhile, about two-thirds of the circuit, 1.5 of the 2.3-mile course, is newly surfaced. And with cement, not asphalt.

In addition, the approach to Turn 7, along The Strand, facing Windsor, is significantly wider. That allows drivers greater speed through the corner, after completing a long straight and before entering a densely packed series of five intricate turns, before delivering the cars to a shorter straight along The Strand.

Also, a bit of a hitch just before the start/finish line along a long arc between Turn 13 and Turn 1 was flattened, providing the opportunity for more speed.

New car designs, a predominantly new surface and a couple of adjustments to the circuit to induce more speed could make for an interesting weekend.

Whether that is enough to shuffle the deck composed of Chevrolets and Hondas, with the world headquarters of General Motors looming in the Renaissance Center just down the river, will be determined Saturday and Sunday.

Will unfamiliarity combine with greater speed to generate on-track incidents that disrupt the field, with the effect of reducing Chevrolet's dominance?

Will tire wear on the brushed cement surface surprise racing crews, with its unpredictability?

Anything is possible, especially with rain predicted for Saturday, and cooler temperatures on Sunday reducing the grip of the tires on the new cement.

"It's always tough," said Indianapolis 500 winner Juan Pablo Montoya, who never has won on the pretty little island in the Detroit River.

"It's always a place where different strategies work.

"It always makes it interesting, because you have cautions that people are not expecting and completely different strategies. So, you never know what the end result is going to be."