Scott Dixon captured a fourth championship by winning the season finale to snatch the title from Juan Pablo Montoya. 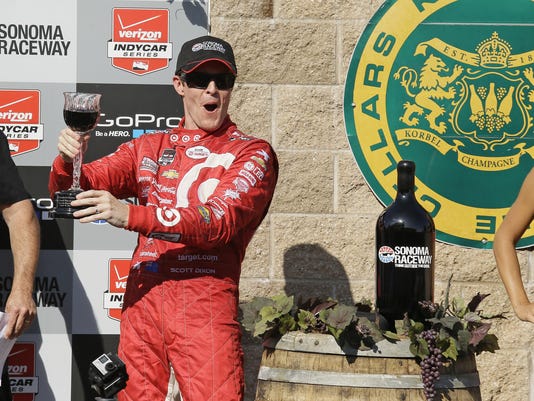 Montoya led the points from the season-opening race right until the final lap Sunday. But he finished the race in sixth, which allowed Dixon to tie him in the standings.

Dixon was awarded the title based on wins; Sonoma Raceway was his third victory, while Montoya had only two. The New Zealand driver entered the race third in the standings, 47 points behind Montoya. The race was worth double points.

“There was still a chance, and that’s what we were hoping for,” Dixon said. “I still can’t believe it. We were such a long-shot.”

The victory was the 100th for Chip Ganassi Racing, while a Team Penske driver failed to win a championship in the finale for the ninth time since 2002.

Team Penske was in trouble from the midway point of the race when Montoya hit Will Power. It sent the Colombian to pit lane for repairs and he was mired in the middle of the pack for the bulk of the race.

Although he picked off a few positions, his break came eight laps from the end when Sebastien Bourdais spun Graham Rahal. Needing to get to fifth to win the title, he moved up one spot to seventh when he passed Rahal.

He got up to sixth when Bourdais was penalized, then had five laps to close a 3.5-second deficit on Ryan Briscoe to move to fifth.

Montoya made a hard charge, ultimately slicing Briscoe’s lead to 1.6 seconds, but he ran out of time to grab that final spot.

He was pragmatic after the race.

“It doesn’t matter what happened,” Montoya said. “We had a few ways to win the championship and we just threw it away. We didn’t close it.”

“When you do this and you put double points on the last race, it doesn’t matter what you’ve done all year,” Montoya said.

Power, the reigning IndyCar champion, was devastated for Team Penske. The organization had three shots at the title Sunday as Montoya, Power and Helio Castroneves were among the six drivers mathematically still in contention.

“I feel so gutted for the team to not win on a draw there,” said Power, who complained that race control had too much of an effect on the race with long yellow flag periods.

Rahal, who was wrecked last week at Pocono Raceway to have his deficit pushed from nine points behind Montoya to 34 headed into the finale, had an off day as he struggled with the handling of his car most of the race. The hit from Bourdais dropped him to an 18th-place finish and he fell from second to fourth in the final standings.

“Today was a bad day to have our worst day,” he said.

The race came exactly one week after Justin Wilson was struck in the head by a piece of debris from Ganassi driver Sage Karam’s car. He died Monday night of his injuries, and Dixon was one of the many supporters who remained in Pennsylvania to stay with Wilson’s family at the hospital.

“Our thoughts and prayers, first, are for Justin’s family,” Dixon said immediately after exiting his car.

Wilson was honored before the race with a tribute video, a moment of silence and the playing of “God Save the Queen,” England’s national anthem.

Oriol Servia flew in from London overnight Wednesday to drive Wilson’s car, a request made by Wilson’s family. He finished 12th.

The 19-year-old Jones beat Canadian road racer Alex Tagliani to the first turn off a restart with two laps left on the 2.459-mile road course and easily held off two-time defending series champion Matt Crafton. Tagliani lost a gear and slipped to fifth.

Jones raced to his second series victory of the year and fifth in 32 career starts. He also won at Iowa in June and has two Xfinity Series victories this year.

The Kyle Busch Motorsports driver took a three-point lead over Crafton. Tyler Reddick, the leader entering the race, dropped to third — 15 points back. He finished two laps down in 19th after running into the back of Gray Gaulding’s truck with 10 laps left.