Robert Richardson Jr. had been out on his ranch, mowing pastures in Pilot Point, Texas, when he got an unexpected phone call three weeks ago. 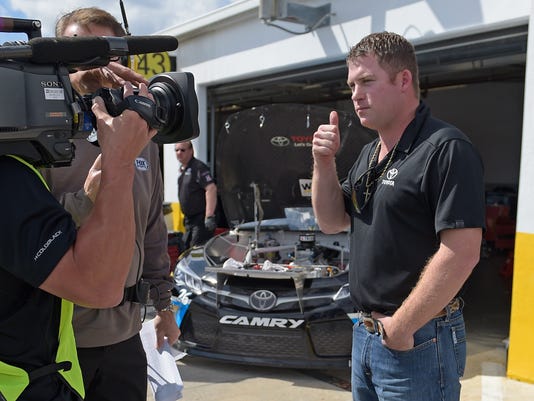 Robert Richardson Jr. gives a thumbs-up as he is interviewed before Daytona practice on Friday.(Photo: Phelan M. Ebenhack, AP)

Daytona Beach, Fla. — Robert Richardson Jr. had been out on his ranch, mowing pastures in Pilot Point, Texas, when he got an unexpected phone call three weeks ago.

He didn't know what to think when Lane Segerstrom, CEO of Frisco, Texas-based Stalk It, offered the opportunity to try and qualify for the Daytona 500 in the No. 26 Toyota, which would be sponsored by Stalk It and running under the BK Racing umbrella.

"I just about fell out of my tractor seat and started doing a dance. It was just overwhelming."

The 33-year-old Richardson has taken full advantage of this latest racing opportunity, though, by qualifying for the Daytona 500 and becoming racing's Cinderella story.

Richardson secured the last transfer spot with his qualification speed, not his 18th-place run in the second Can-Am Duel on Thursday evening at Daytona International Speedway.

His BK Racing teammate, Matt DiBenedetto, raced his way into the field during the duel, which opened the door for Richardson to qualify on his qualification speed.

Richardson is scheduled to start last in "The Great American Race," but he will start ahead of any driver who has to switch cars following the wreck-filled duels.

Regardless, come Sunday, he'll be running with the best drivers on the planet, from Dale Earnhardt Jr. to Jimmie Johnson.

It's quite a fairytale story for a guy who has run a total of eight Sprint Cup races, including Daytona 500 starts in 2010 and 2011, and had thought his racing days had come to an end following the 2014 season.

"To go from being a hay farmer to making the field in the Daytona 500 ... I really didn't expect this," said Richardson, who is going to put any purse money he wins into his newborn son's (Robert Thomas) college fund.

"I've been living a lot slower pace life. Going to church on Sundays and farming, that's what my life has been about the past year-and-a-half and I've loved every minute of it."

Of course, an opportunity to drive in NASCAR's most prestigious race is something that he couldn't pass up. This is a guy who beat long odds in simply becoming a NASCAR driver.

Like most boys growing up in Texas, football, not racing, consumed Richardson's life. He played from a young age, becoming a standout quarterback in high school and eventually landing a spot on SMU's team in 2000.

But the Mustangs just so happened to have a future NFL quarterback, Josh McCown, on the roster, which made it difficult for Richardson to see the field.

So, at about the age of 20, the football player majoring in studio art opted to pursue a racing career after one season.

Richardson had always had a fondness for it, from his days camping out when Texas Motor Speedway opened in 1997 and eventually beginning his racing career in 2002 with the speedway's Lone Star Legends circuit.

"I'd never been a race fan my whole life, but he had a real good lifelong friend, Mike, and they would go to TMS and camp out and sleep in the outfield," Richardson's father said. "And the first two years, it just rained like crazy. His truck got caught in mud both years, and he had to pay $50 to get it towed.

"I'm like, 'How can that be any fun?' But he's like, 'Oh yeah, it's fun.' So he started out as a fan from sleeping in a tent in the outfield of Texas Motor Speedway and now he's going to drive the Daytona 500 for the third time. What a story."

The story warms the heart of TMS president Eddie Gossage, too. Gossage hears from people all the time about how difficult it is to break into the racing industry, but Richardson is proof that it can be done.

"I always argue with folks who say there is a barrier to entry. If you've got the talent and the desire, you can get here," said Gossage, who is attending the Daytona 500 this week.

"But you have to realize that you've got to be among the truly best because there are only 40 Cup drivers.”

Simply getting into the field is an accomplishment for Richardson and his team. But, as everyone knows, the Daytona 500 is wide open.

Any of the drivers can win it, and it's not too far-fetched to think Richardson could find himself in the mix. After all, crazy things happen at the Daytona 500. Only five years ago, a 20-year-old rookie named Trevor Bayne started 32nd and won.

"I feel pretty good about us going into it," Richardson Jr. said. "The more we've worked on the car, the better we've got."

At the end of the day, Richardson Jr. hopes to make his team and home state proud. The bandwagon is open.

"Thanks to all my fans back home in Texas supporting me, especially there in Funky Town ... you know, cheer me on, man," Richardson said. "Go for that 26 car in the Daytona 500."