The Kasey Kahne-Danica Patrick dustup wasn’t the only controversial drama on the track at Fontana last weekend. 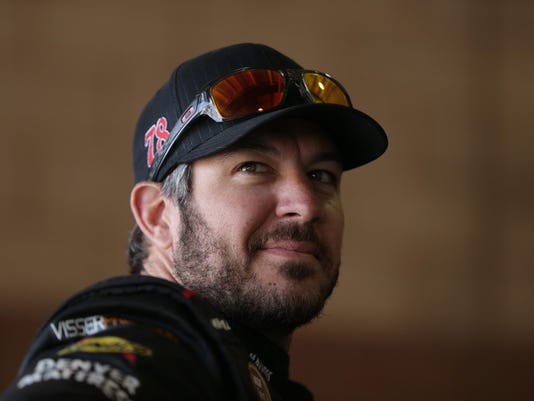 The Kasey Kahne-Danica Patrick dustup wasn’t the only controversial drama on the track at Fontana last weekend.

Joey Logano and Cole Pearn, come on down.

Martin Truex Jr.’s car made contact with the outside wall, courtesy of a Logano squeeze play, which prompted this nasty retort on Twitter from Pearn, crew chief for Truex.

“I guess (at sign)joeylogano can’t see through his squinty eyes,” Pearn tweeted — though he later apologized.

Truex was having a solid day, spending much of the race in the top five, until the incident with Logano on the 150th lap. Both were running the high groove when the cars made contact.

Truex finished 32nd, one lap down, thanks to the damage.

“How did the air get taken off if he was behind me? He just ran me over,” Truex Jr. told Motor Racing Network during a postrace interview. “It’s ridiculous. We had a great car (during the entire race) and I hate that my guys have got nothing to show for it.

“I don’t know why he was trying to fake me out. Just pass me. He just screwed up. He knows he (messed) up, and I’m going to race him differently from now on.”

Logano fared much better, finishing fourth, and later was in an apologetic mood.

“We never touched each other, but just taking the air off these cars makes them uncontrollable. I didn’t mean to do that. I was gonna try to go to the top and I just got a little bit close to him and got him free, so I’m taking the hit on that one.”

Johnson donned his Superman cape after the victory, which pushed him past Dale Earnhardt Sr. on the career victory list, seventh overall.

“It’s known it’s important for me to handle this with class, with respect, with honor for what I’ve done,” Johnson said. “The fact that I tied Dale with the win in Atlanta, and where we are now, I know there’s some more legends just ahead of me in the sport.

“I look forward to getting a chance to get up there and honor them as well and join them.”

Based on prior performance, it’s inevitable Johnson continues to nudge his way toward the top, though he likely will stop short of Richard Petty’s record 200 wins.