Target will leave IndyCar at season’s end after 27 years with Chip Ganassi Racing that included 11 championships. 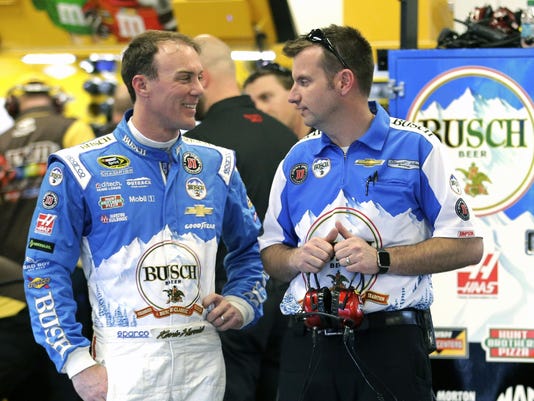 NASCAR has suspended Rodney Childers, right, the crew chief for Kevin Harvick, for an improperly installed lug nut at Indianapolis Motor Speedway. Rodney Childers will not appeal the suspension or his $20,000 fine. He will miss Sunday's race at Pocono Raceway.(Photo: Terry Renna / Associated Press)

Charlotte, N.C. — Target will leave IndyCar at the end of this season after 27 years with Chip Ganassi Racing that included 11 championships and four Indianapolis 500 victories.

The exit comes as Target is examining all of its marketing platforms under new chairman Brian Cornell. Target is also the primary sponsor of Kyle Larson in NASCAR’s top Sprint Cup Series and will return to his car in 2017.

Target’s relationship with Ganassi is one of the longest in any racing series, and the retail giant was a key player in helping Ganassi build his organization. Target not only sponsored Ganassi’s first car as a team owner, it eventually became a partner as the Ganassi team grew to one of the top two players in open-wheel racing.

“It was a really difficult decision that we made — we’ve been with Chip Ganassi Racing for 27 years and we are ridiculously proud of the success,” Nygaard said in a telephone interview with The Associated Press. “But the Target brand is about being fresh and new, so we felt like this was the time to make the difficult decision and expand our sports marketing platform.”

About the NASCAR sponsorship, Nygaard said only that Target is excited for the 2017 season with Larson. Target’s contract with Ganassi runs through next year.

Chip Ganassi raved about his partnership with Target while noting he understood the company made a business decision after nearly three full decades together in IndyCar.

“It’s the greatest sponsor in racing, ever,” Ganassi said. “They’ve been nothing but good to me. They developed me personally and professionally. I’ve developed lifelong friends and relationships. I understand things change and people have different marketing efforts, and the way they want to stamp their name on things.“But it’s one of the longest-running sponsors in racing and they delivered for me and the team, and the team delivered for them.”

Target walks away from an enormous investment it made in IndyCar and aligning itself with Ganassi drivers as its brand ambassadors. That includes Dixon, who has been sponsored by Target for 15 years. Ganassi said he expected to announce a replacement on the Target car within the next two months.

Four-time IndyCar champ Dixon has 39 career victories, including the 2008 Indy 500.

“I can’t thank Target enough for their partnership on and off the track over the years,” Dixon said. “They have been with the IndyCar team for an amazing 27 years, which is unheard of in professional sports, and on the car I’ve driven for the past 15 seasons. I have nothing but great memories and much thanks for Target being great partners for so long.”

NASCAR has suspended the crew chief for Kevin Harvick for an improperly installed lug nut at Indianapolis Motor Speedway.

Rodney Childers will not appeal the suspension or his $20,000 fine. He will miss Sunday’s race at Pocono Raceway.

Childers is the fifth crew chief suspended over a lug nut rule instituted by NASCAR earlier this season.

... NASCAR, deciding the NFL is unlikely to expands its schedule anytime soon, announced that the Daytona 500 will be moving back to its traditional Presidents Day weekend in 2018.

... Sam Wheeler, a renowned land speed motorcycle racer, has died after a racing accident at Utah’s famous Bonneville Salt Flats. He was 72.

... NBCSN said Sunday’s Sprint Cup race from Indianapolis Motor Speedway was the network’s most watched and highest-rated telecast ever.

NBCSN said the broadcast averaged 5.2 million viewers, up more than 11 percent from a year ago (4.7 million).

Last week: Kyle Busch won from the pole in Indianapolis to capture the weekend sweep.

Last race: For the third race in a row, Kyle Busch won both the pole and the race. Busch has won seven Xfinity races so far in 2016.

Last race: Kyle Larson won on the dirt at Eldora after a crash took out pole-sitter Bobby Pierce.