Qualifying for the Chase for the Sprint Cup playoff opener at Chicagoland Speedway was canceled because of rain — again. 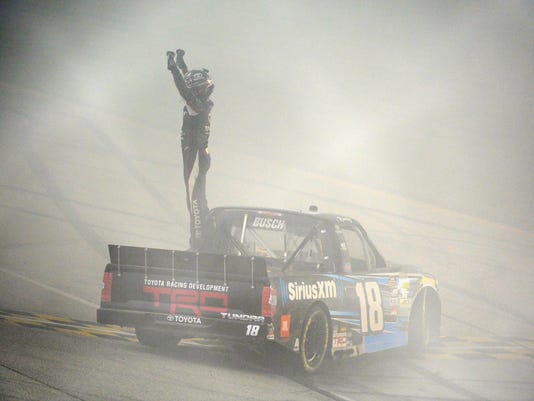 Joliet, Ill. — Qualifying Friday for the Chase for the NASCAR Sprint Cup playoff opener at Chicagoland Speedway was canceled because of rain for the third consecutive year.

The lineup for Sunday’s 400-mile race will be based on the playoff seeding, putting Kyle Busch on the pole with Brad Keselowski joining him on the front row.

Denny Hamlin will start third, followed by Kevin Harvick, Cal Edwards and Martin Truex Jr. The 16 drivers who qualified for the 10-race playoff will all start at the front of the field.

Busch is seeking his second straight Sprint Cup title. He’ll need to get past two elimination rounds to get into the group of four drivers eligible going into the last race Nov. 20 at Homestead.

“We kind of look at this round as don’t make any mistakes,” Busch said. “Just kind of keep preparing yourself, keep getting ready for how the pressure will continue to rise.”

Jimmie Johnson, who will start eighth Sunday, was the fastest in that session, followed by Edwards and Denny Hamlin.

Johnson has never won at Chicagoland and hasn’t made it out of the second round in the two years of the elimination format.

“There’s a lot of optimism and a lot of great things happening,” Johnson said. ”We just need to deliver consistently and execute at the track.”

Alex Bowman, filling in for Dale Earnhardt as he recovers from a concussion, spun out in the closing seconds of practice trying to get onto pit road. He didn’t appear to damage his car.

Regan Smith, who will start 33rd based on the standings, left the track to return home after his wife went into labor. Ty Dillon filled in during the practice session, but it’s possible Smith will return for Sunday’s race.

“Big thanks to everybody who helped me back and those who offered,” Smith tweeted after landing in North Carolina.

With only 40 cars entered, none was eliminated without a qualifying session. The teams are scheduled for a final practice Saturday before the 267-lap race.

Kyle Busch overcame a race-record 11 cautions for his 46th career NASCAR Truck Series victory Friday night, dashing the hopes of full-time drivers needing wins to claim a spot in the debut Chase for the championship.

The Sprint Cup star’s second circuit win of the season and fifth trucks win at Chicagoland Speedway meant Daniel Hemric and Timothy Peters earned the final two spots in the eight-driver playoff field based on points.

Busch took on four tires and re-started ninth with 42 laps to go before quickly charging to the front just before Johnny Sauter clipped Ben Kennedy to ignite a crash and red flag.

There were four more cautions before Busch blew past Cameron Hayley on an overtime restart and had the lead when the final caution flew on the last lap. Busch led 95 of the 150 laps on the 1.5-mile oval for his 167th win on NASCAR’s top three circuits.

The race began with six of the eight Chase spots already determined. John Hunter Nemechek was the last to clinch after he tangled with Cole Custer in the grass before claiming a win in Canada.

Custer, who announced earlier Friday that he would move to the Xfinity Series next season with Stewart-Haas Racing, was penalized for speeding on pit road with 84 laps left. He still got into the top 10 late before being involved in a wreck that caused a tire rub. He finished 10th.

Spencer Gallagher earned his first pole and John Wes Townley joined him on the front row. It rekindled memories of their on-track wrestling and boxing match after an incident at Gateway Motorsports Park in June that included takedowns and punches to the face.

But mistakes kept both out of the Chase, with Townley sparking an accident that caused the final caution and Gallagher finishing sixth.

Peters qualified for the Chase by finishing eighth despite hitting the wall and having a right-front tire go down on the 67th lap.

Byron, a five-time winner, scraped the outside wall after four laps and headed to the garage. He returned 40 laps later only to again crash and finished 30th.

Kennedy’s car was destroyed and damaged the SAFER barrier, causing a 14-minute delay. He was treated and released from the infield care center.

Matt Tifft had to pit early with a loose wheel and finished 12th in his first race since undergoing surgery to remove a non-cancerous brain tumor. Tifft received applause when he was introduced in the prerace driver meeting.