Sadler pushed his No. 1 JR Motorsports Chevy Camaro from 15th with 50 laps left for his third series victory this season. 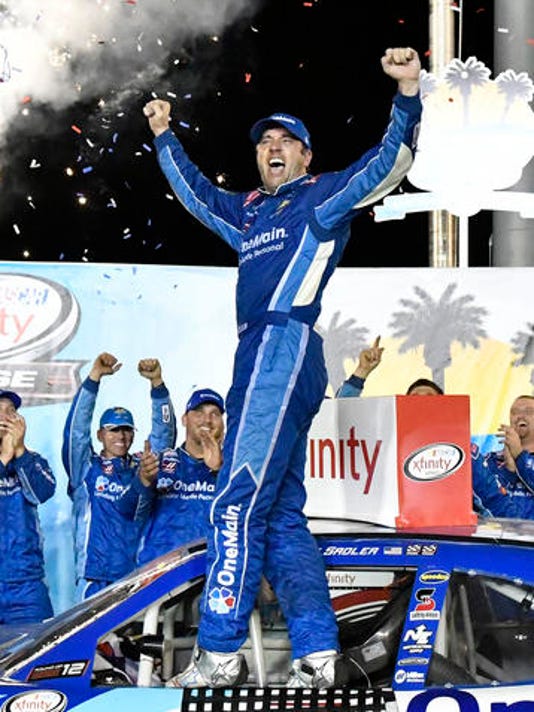 Elliott Sadler raises his arms in celebration in Victory Lane on Saturday after his win in the Xfinity car race.(Photo: Timothy D. Easley, Associated Press)

Sadler pushed his No. 1 JR Motorsports Chevy Camaro from 15th with 50 laps remaining for his third series victory this season and the first spot in the eight-driver second round that begins at Kansas Speedway on Oct. 15.

Sadler previously competed in the inaugural Chase for the Sprint Cup in 2004, finishing ninth. He finished second in 2011 and 2012 in the Xfinity Series and is seeking his first title.

“We fought through a lot tonight,” Sadler said. “We had a 10th- or 15th-place car at best. We decided to come in, really take our time and work on it. We had good calls by (crew chief) Kevin (Meendering) and the guys to get us in position.

“This team has no quit in it, we just fight to the end. This is a great way to start the Chase.”

Sadler dedicated his victory to his mother, nicknamed “Mama Belle,” who is battling an illness and underwent two surgeries this week.

Erik Jones, who entered the race with the championship lead, was denied a series win at Kentucky for the second time this season despite leading the 300-mile event five times for 100 laps.

Jones’ chance for victory was derailed with 13 laps remaining when his No. 20 Joe Gibbs Racing Toyota was knocked out of contention after tangling with Ty Dillon’s No. 3 Chevy at the exit of Turn 4.

The Liberty University freshman dominated at New Hampshire Motor Speedway and won for a whopping sixth time this season.

This win came with extra credit: the 18-year-old Byron became the first driver to advance to the second round of the Chase.

“It’s a great run for our team,” he said. “We needed this to get back into Chase form.”

NASCAR expanded its Chase format this season to include the feeder Xfinity and Truck Series, its champions now crowned in a four-driver shootout at the season finale. The format mostly mirrors the playoff setup used to determine the Sprint Cup champion the last two years.

Trucks will use a seven-race Chase to decide a champ. In Trucks, the format is eight drivers cut down to six and then a final four at Homestead.

Byron led 161 of 175 laps and was never seriously challenged the No. 9 Toyota in yet another flawless win. His Kyle Busch Motorsports teammate Christopher Bell was second. Matt Crafton, non-Chase driver Tyler Reddick and Timothy Peters completed the top five.

Busch had advice for Byron before he took the wheel: “Go fast and turn left.”

It was that simple.

Byron, who will race next season for JR Motorsports in the Xfinity Series, won from the pole. Byron lives in a dorm at his Virginia college and seems to have found a home in victory lane. Busch said his only expectations this season were for Byron to win “a race or two.”