Kalitta has been running in the NHRA for 20 years and is as hungry as ever for his first Top Fuel series championship. 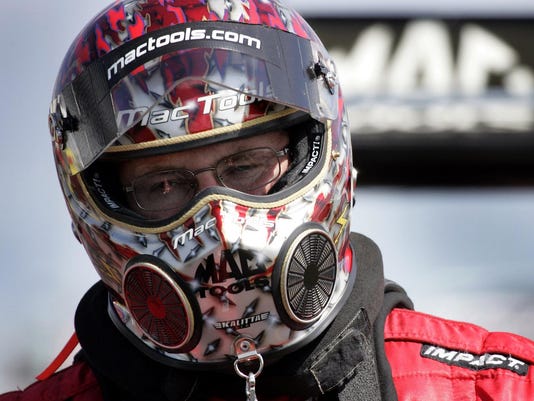 Ypsilanti — Doug Kalitta has been running in the NHRA for 20 years and is as hungry as ever in his hunt for his first Top Fuel series championship.

Kalitta owns 42 career wins, fifth most all-time in Top Fuel heading into this weekend’s race at Norwalk, Ohio, just outside of Sandusky, the track Doug calls “our hometown track,” since it’s less than two hours away from Kalitta Motorsports’ headquarters in Ypsilanti, and just 90 miles away from his primary sponsor Mac Tools’ headquarters in Westerville, Ohio.

Kalitta was well on the way to becoming series champion in 2006 when Tony Schumacher won the final race of the season — and getting a national record time — to win the title by a 1,681-1,667 margin.

Kalitta has showcased the ability and the equipment for a championship run in recent years, including a year ago when he entered Norwalk on a hot streak, winning three straight races in May, then coming off a semifinal appearance at Bristol to lead the Top Fuel standings, ultimately earning a series runner-up spot in the Countdown, the final six races of the season.

Kalitta has struggled at times this season, as has the entire Kalitta team which showcases three Top Fuel cars — Kalitta, former Top Fuel champion Shawn Langdon and rookie Troy Coughlin Jr. — along with Funny Car drivers J.R. Todd and Alexis DeJoria. The 82-member operation based in the 50,000-square foot shop in Ypsilanti has a budget of close to $18 million.

And, Kalitta feels Summit Motorsports Park in Norwalk is just the place to turn the season around, since he has a win there in 2015, along with a No. 1-qualifying showing last year, and Langdon has a win at the site last year.

“That would be the ideal situation for sure, and hopefully that’s how it plays out to get things going consistently,” said Kalitta, who currently sits fifth in the standings. The top 10 drivers in each division earn spots in The Countdown, which is the six-race playoffs for the title.

“We won at Norwalk a couple of years ago and it’s nice winning in your backyard,” he said. “It’s been a passion for sure to win that championship, so I’m going to keep at it. It’s all about being confident and just putting your best foot forward really.”

Kalitta now has a lot of youth around him in the 34-year-old Langdon, who won a Top Fuel championship while driving for Alan Johnson in 2013, and the 26-year-old Coughlin. Langdon competed the last couple of years for Don Schumacher — Tony’s father — before losing sponsorship for his ride just before the 2017 season.

When Langdon was offered a seat in Top Fuel by Kalitta’s uncle, the legendary Connie Kalitta, and Kalitta team vice president Jim Oberhofer five races into the season, he didn’t hesitate. Langdon quickly showed his ability with a pair of semifinal spots, including last week at Bristol when he defeated Kalitta, the No. 2 qualifier, in the opening round.

“We both had to pedal and try to get the thing down there, and he (Langdon) did a great job so apparently he’s great at pedaling the car which is great because sometimes when it goes out there and loses traction you have to be able to get it under control and get it to the finish line,” Kalitta said of Langdon.

Langdon has high praise for Kalitta.

“I grew up as just a huge fan of the sport as a kid, and I remember going to the race track and getting Doug Kalitta’s autograph as a kid,” Langdon said. “So, to be racing with him now, I’ve competed against him for a lot of years, so I know he’s a great driver.”

“He’s definitely very deserving of a championship. He’s one of the best drivers out here. He’s a great leaver on the starting line and is a master at pedaling the race car. Last weekend, for me, I was very tickled by beating him first round in the pedalfest because 99 times out of 100 you’re not going to beat Doug on a pedalfest, so that was a proud moment for me.”

Kalitta has learned all about the sport from his Uncle Connie, first while working as a crew member, then as a driver, and both of them have been hugely successful in their own separate air transport business.

Kalitta used to work for his uncle at Kalitta Air, piloting DC-8 and Learjets. He still pilots 30 Series Learjets or the Falcon 20 when he travels to the 24 stops on the NHRA schedule with Connie among the half dozen or so passengers.

Doug Kalitta owns Kalitta Charters based out of Willow Run with 310 employees and 48 planes with the company continuing to grow on a yearly basis.

“We’re really diversified so we’re doing a lot of different things,” Kalitta said. “We do a lot of medical flights. We do a lot with DHL and the planes that I’ve been running for DHL are the 737 400s, and you can’t buy those already modified as a cargo plane so typically you’ll buy one as a passenger plane and then there’s a company out of Miami that does the conversion.

“We’re just chasing down different opportunities. Connie actually worked real hard at nurturing. That’s really how our DHL opportunity started with the 747 aircraft, it was a mail contract moving freight from here to Afghanistan over the years. It ended up being a huge piece of business and with all the racing that DHL does, Formula One, Indy, it was good fit actually for DHL to get involved with NHRA. It’s something we’ve talked them into, but it’s a good fit for them and they’ve been with us for nine or 10 years.”

Doug Kalitta was a crew member on Connie Kalitta’s Top Fuel team from 1982-89, learning the ropes of the NHRA business before changing gears to drive sprint cars and midgets, actually winning the USAC Sprint Car championship in 1994 with Tony Stewart as one of his top rivals.

When one of Connie Kalitta’s Top Fuel seats opened up in 1998, Doug jumped at the opportunity to drive in NHRA and hasn’t looked back, taking everything he has learned from the master and putting the knowledge to good use.

For tickets: Call Summit Racing Equipment Motorsports Park at (419) 668-5555, or go to www.summitmotorsportspark.com. Kids 12 and under are free in general admission areas with a paid adult.