NASCAR driver wants to be ambassador for sport after this season 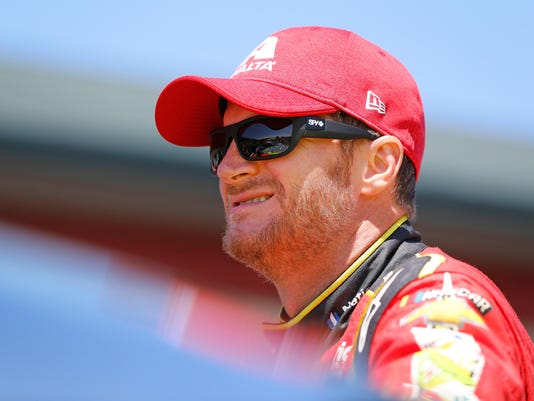 Sonoma, Calif. — Dale Earnhardt Jr. had just completed a satisfying sixth-place finish at Sonoma Raceway when he was stopped by the Fox Sports cameras in what might have been his final postrace interview with the network.

It was 17 years ago that Fox made its debut as NASCAR’s newest broadcast partner, and that Daytona 500 will always be remembered for the fatal last-lap accident that killed Dale Earnhardt Sr. His son rushed from the track in his firesuit to the hospital hoping for the best, but his father was gone.

He was practically a kid back then, doing his interviews with a baseball hat on backward before jumping in his race car as a respite from the chaos around him.

Now 42 years old and married, Fox stopped him Sunday after what might have been his final race on the picturesque road course in Napa Valley wine country. He was asked, “When you look back to the past 17 years, what will stand out the most? What will you be most proud of?”

“I think the wins and everything, are great. I enjoyed celebrating those,” Earnhardt began. “But, long after your career — guys come along and win races and some of your accomplishments on the track sort of get forgotten. But, who you are as a person never gets forgotten. People never forget who you were.

“I hope people just thought I was good and honest and represented the sport well. I hope people that work with me enjoyed working with me, whether it was in the late model ranks or whatever; and I hope the guys I raced against enjoyed racing with me. That’s really all that will matter. And, what people I think will remember, is always you’re alive and beyond. Hopefully I left a good impression. I’ve had a lot of fun.”

With that, it was off to prepare for Saturday night’s race at Daytona International Speedway. It’s the second half of the season, and every stop Earnhardt makes from here until November will effectively be “his last race at that track.”

As his farewell tour began in Sonoma — the track “gifted” him the sponsorship of three Labrador retriever puppies that will be raised and trained to help children with disabilities through Paws as Loving Support Assistance Dogs — Earnhardt is becoming more reflective with each passing race.

That should make this week’s stop in Daytona a tough one for NASCAR’s most popular driver.

He comes from a time when the “Firecracker 400” was actually held on the morning of July 4, then all the drivers would take their families to Daytona Beach after the race. He’s always been nostalgic for the simpler days in NASCAR, when he was just a little boy in awe of his father and his racing heroes.

Daytona, with all its grit and biker bars, gentleman’s clubs and chain restaurants, is still paradise to Earnhardt.

With his countdown to retirement under way, Earnhardt himself seems to be recognizing the end is near. And it sounds very much like he has mixed emotions.

Earnhardt was asked last weekend about what should be his final race at Daytona, and his answer was a very firm statement that he isn’t going anywhere.

“I am just retiring from full-time racing. I am going to run some Xfinity races next year. I don’t know that I won’t ever run the Daytona 500 again,” he said. “I want to continue to be part of the sport. I don’t know how it’s going to affect me, really. It’s hard for me to put that into words because I don’t know what that is going to feel like.

Earnhardt, a two-time Daytona 500 winner, owns an Xfinity Series team. There also seems to be interest in him for a broadcasting career, with Sam Flood, executive producer for NBC’s NASCAR telecasts, telling The Associated Press there’s room on broadcasts for Earnhardt.

Should he land a job with NBC, he’d be reunited with former crew chief and current analyst Steve Letarte, who told Earnhardt he himself struggled initially with the transition.

“I’m not retiring from work,” he said. “I want to keep seeking out opportunities to make a living and make money and be relevant, be a value to my partners. I want to continue to be a part of the sport and not just as an owner in the Xfinity series. I want to be a valuable asset to the growth of the sport.”