Responding to concerns about the public’s lack of access, setting up the Raceway on Belle Isle began a week later.

Critics have complained that preparations for the Detroit Grand Prix begin just at the moment the brilliant yellow of the daffodil blooms speckle Belle Isle.(Photo: Daniel Mears / Detroit News)

Detroit — At long last, the daffodils have brought bright hues of spring back to Belle Isle, and the organizers of the Detroit Grand Prix want you to come and see them.

Responding to concerns about the public’s lack of access to some of the state park for about 20 percent of the year, smack dab in the middle of spring when winter-worn Detroiters and others can finally walk around outdoors without bracing against the cold, setting up the Raceway on Belle Isle began a week later this year.

The organizers are also working to provide more visibility at the western quarter of the island, where the racing occurs, while the longest track in the IndyCar Series is assembled.

The effort is essential to continued racing.

To secure the island in the future, when the state’s permission expires after the last checkered flag flies at the end of a weekend of racing, June 1-3, organizers must satisfy state Department of Natural Resources officials that they are making good and viable use of the city property, which is leased to the state.

More: IndyCar's Kanaan on Belle Isle: 'I love this place'

Some residents insist Belle Isle is no place for automobile racing, and the length of time it takes to stage the event is dramatic evidence.

The long duration of setting up the track and taking it down is a crucial issue for Roger Penske’s team of administrators and laborers to resolve, in advance of reapplying for a state permit in 2019 and, presumably, beyond.

“I would say that’s not the only issue,” said Ron Olson, chief of the Parks and Recreation Division of DNR, who will make any decision about permitting more racing in what, according to Olson, is now the most-visited state park in the nation, with 4.2 million guests, annually.

“But, clearly the beginning of the set up and the completion of the takedown, that visible impact, that requirement to have a safe race, the fencing and the barricades and stuff, I would say that is probably the thing we hear the most about, from the public.”

Race officials say they are on it.

“We’re looking for ways every single year that we can improve it,” said Michael Montri, the general manager of the Detroit Grand Prix, who said the track and associated work will be on Belle Isle for 68 days this year.

Racing to be faster

The permit from the state, an extension of the city’s original agreement with race organizers, requires 84 days.

If they prove they can do it in 68, race officials say they will have a better idea of what to propose to the state as a reasonable duration, when they reapply for permission to race later this year.

“Before we do that, before we make a commitment as to how many days we can do it, we want to test it out, here, this year,” Montri said. 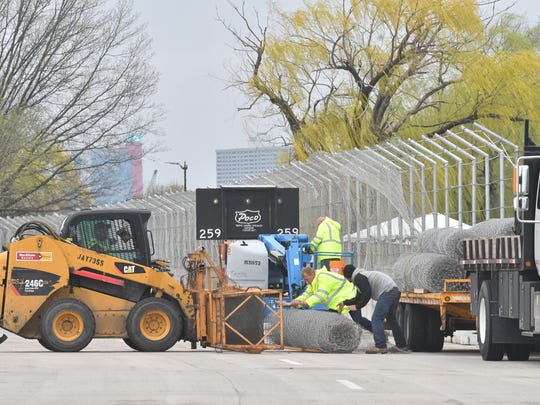 Workers build fencing along the south side of Belle Isle for the Detroit Grand Prix on Thursday. (Photo: Daniel Mears, Detroit News)

Some residents of the city say they are beyond hope.

“At the start, I was willing to entertain compromise about the setup and teardown time, because there’s expressed willingness to shorten it,” said Moira Fracassa, an academic services officer. “But the way things have progressed, it hasn’t felt like those intentions or ideas were taken all that seriously.

“I see Belle Isle as our Central Park, and we have a very short summer in Michigan.

“The season when people can really be out and about on the island is short. The race is a pretty big chunk of that, and I think that’s problematic and I think that they should find a different spot for it.”

Belinda Aberle, a nursing professor, says she and her husband, Kevin, are big sports fans who moved to Detroit three years ago, after Kevin, a native of the city, spent 35 years in Ann Arbor.

“We love sports. We love what they bring to a community,” Aberle said. “So, we are not opposed to what sports fans like about car racing. It’s not our thing, but it’s OK that it’s some people’s thing, just like hockey is not for everybody.

“My issue with the race is the setup and take down time. I really don’t understand it.”

“I think Penske’s group has gotten away with what they want to get away with, in the name of bringing revenue to the city,” she said.

It is hard to find any automobile race in the world that takes more time to set up and take down.

The Circuit de Monaco, the raceway on which the legendary Monaco Grand Prix has run since 1929, takes nine weeks (63 days) to assemble and disassemble.

But Montri argues that the most reliable gauge of the time is the proportion of days to the length of the track.

He points to the logistics of assembling 157,000 square feet of elevated flooring, an area equivalent to 25 Comerica Park scoreboards, Montri says, to keep fans, racing teams and staff up off the grass.

There is 115,000 square feet of tenting, the equivalent of two football fields, Montri says, to house elements of the racing and entertainment activities.

“When you compare that to other circuits, I don’t know what square footage the tents in Monaco are,” he said. “So, you really can’t use that as a comparison.”

But the number of days per mile of track provides an appropriate measure, Montri asserts.

“If you take that number and you compare it to all of the other temporary circuits in the world, I guarantee you we are in the top three to five in the world, in time,” he said.

“Toronto was a little bit longer than us, but we are told they’re going to be able to speed it up this year.”

Beyond starting a week later, some major steps to cut time this year include moving the media out of the Belle Isle Casino into an adjacent tent. The Casino will house a variety of administrative operations that use to run out of 20 trailers arrayed around the site, which covers 270 acres of the 982-acre island.

Preparation time is reduced by no longer having to set up the trailers and equip them with phone lines, internet access and power, Montri said.

And, the outside walls of the track, made of jersey barriers equipped with cyclone fencing supported by six to 14 industrial-strength cables to retain racing debris from the cars, or the cars themselves, from flying off the track or into the stands, are still not in place on Sunset Drive and The Strand.

The installation is delayed, allowing visitors to the island to enjoy the dramatic view of the Detroit skyline from the western end of the island, and to walk down right down to the river.

There, visitors will find daffodils.

When the Department of Natural Resources held “a listening session” on the Raceway on Belle Isle late last autumn, critics complained that preparations for the racing begin just at the moment the brilliant yellow of the daffodil blooms speckle Belle Isle.

“It was the first time I ever heard of it, that our buildout happened to overlap with exactly the time the daffodils bloom every year,” Montri said. “And for us, having not known about it, we just sort of went about our build as we did every year.”

Starting a week later helped, as does a different process to assemble the retaining walls, the track’s safety barriers.

“And, we actually just donated the funds for an extra 34,000 daffodils toward the entrance of the MacArthur Bridge,” Montri said.

Natural beauty has drawn visitor to Belle Isle, even before it took that name in 1845, when the French called it Hog Island (Ile aux Cochons), before it became the private estate of the American General Alexander Macomb Jr., a hero of the War of 1812.

“You know, the very reason that the grand prix organization wants to be there now, the beauty, is the very reason the park is there for the people, not for private enterprise to be using for almost 20 percent of year,” said Sandra Novacek, a local author and publisher.

“And, it is the prime time of the year, when we’re all coming of the horrible winter, and coming into spring.”