For most riders, Saturday’s Monster Energy AMA Supercross event at Ford Field is merely the eighth round of what’s shaping up to be another long, strenuous season.

Top Supercross rider Dean Wilson (15) makes a statement as he flips his back wheel over a dirt mound for the 2019 Monster Energy Supercross at Ford Field in Detroit on Friday, February 22, 2019. Max Ortiz, The Detroit News
Fullscreen

The massive video displays at Ford Field host the the 2019 Monster Energy Supercross in Detroit as seen on Friday, February 22, 2019. Max Ortiz, The Detroit News
Fullscreen 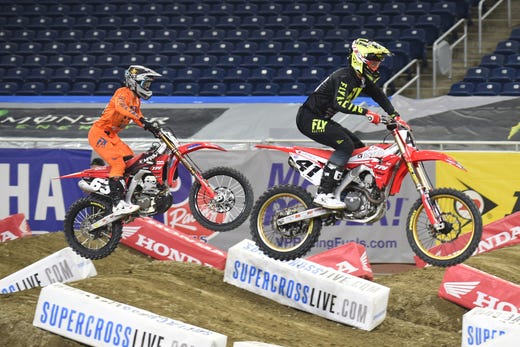 Top Supercross riders John Short (left) and Ben Lamay take to the track during a practice run for the 2019 Monster Energy Supercross at Ford Field in Detroit on Friday, February 22, 2019. Max Ortiz, The Detroit News
Fullscreen

Top Supercross superstar Joey Savatgy (17) speaks to the news media during a practice run for the 2019 Monster Energy Supercross at Ford Field in Detroit on Friday, February 22, 2019. Max Ortiz, The Detroit News
Fullscreen 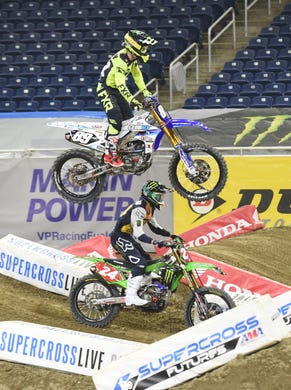 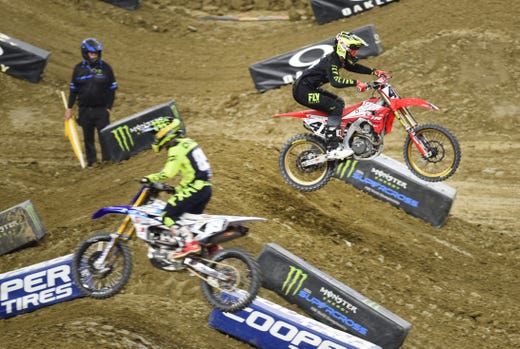 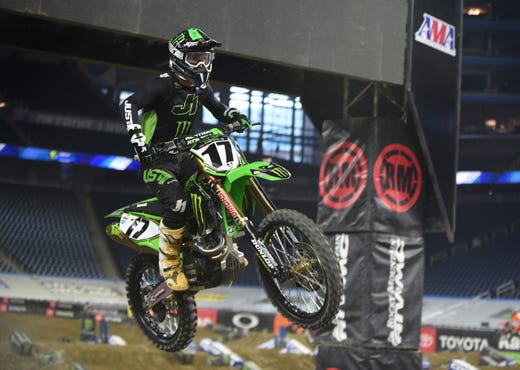 Supercross superstar Joey Savatgy (17) catches some air during a practice run for the 2019 Monster Energy Supercross at Ford Field in Detroit on Friday, February 22, 2019. Max Ortiz, The Detroit News
Fullscreen 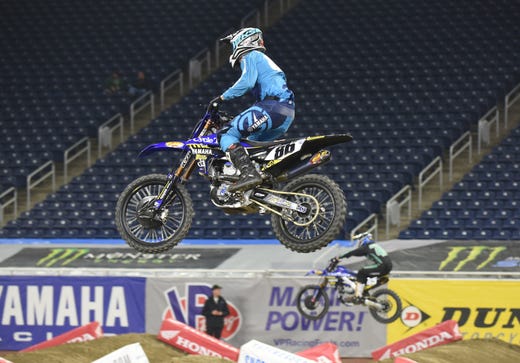 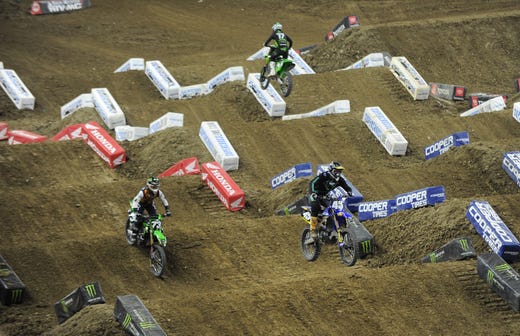 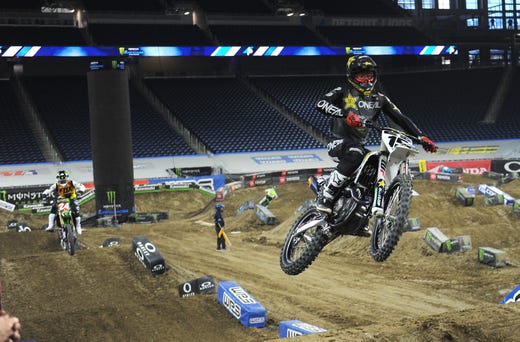 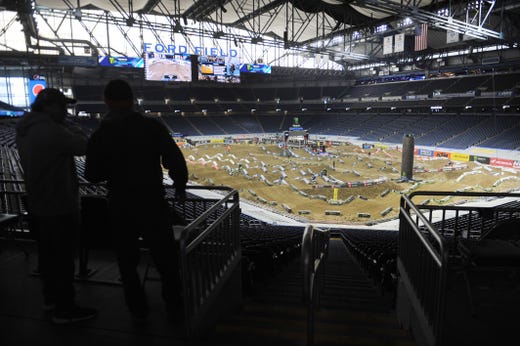 Supercross riders race down tons of dirt and ramps for the 2019 Monster Energy Supercross at Ford Field in Detroit on Friday, February 22, 2019. Max Ortiz, The Detroit News
Fullscreen 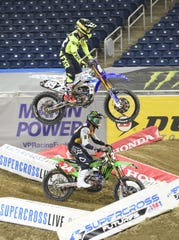 Detroit – For most riders, Saturday’s Monster Energy AMA Supercross event at Ford Field is merely the eighth round of what’s shaping up to be another long, strenuous season.

But for Metamora, Mich., native Joey Crown, racing in Detroit is the fulfillment of a dream the rookie rider sought from the age of 3, when he was first placed on a bike by his father and former professional motocross rider, Matt Crown.

“I was a baby going to races with my mom and dad. It’s been my whole life,” Crown said Friday at Ford Field. “(My dad) raced in the Pontiac Silverdome back when they had that, so I looked up to him, and I saw him racing, and I wanted to be like dad.”

In a lot of ways, he has met his goals.

But Crown, 20, has admittedly had a “rough” start in the 250SX class on the AMA Supercross tour. He’s failed to pick up any points in his first two races and has had trouble adjusting to the “tighter” tracks and world-class competition.

“It’s a whole different ball game,” Crown said. “(The first two races were) definitely below where I expected to be and what I’m capable of, I know.”

Saturday will be Crown’s first time racing in Detroit as a professional – an exciting opportunity, for sure, but in front of “at least” 50 friends and family members, the pressure to qualify for his first main event will be compounded.

Coupled with his slow start, Crown said he’s “struggled” with his confidence due to the success of first- and fourth-place 250SX riders Austin Forkner and Chase Sexton, who Crown remained on par with as a teenager.

“These guys who are winning and battling for wins, all in amateurs I battled with them,” Crown said. “The last couple years, I’ve kind of lost touch with that.”

At a critical juncture in his young career, Crown could not be more thankful to have his father in his corner.

“The biggest thing he tells me all the time is to believe in myself,” Crown said.

But Matt’s words of wisdom to his son also go outside simple anecdotes of inspiration.

Crown’s father has cut his teeth as a professional rider, too, and his post-race text messages — which Crown joked have taken on a “more frustrated” tone as of late — often contain reminders to stay locked in on “the basic stuff that you tend to forget once you get to the big stage.”

“He’s still trying to coach me along, looking through my turns. … He still helps me with technique and the training side of things also, off the bike. It’s definitely good to have him by my side.”

Crown will be one of two Michigan natives to compete in Saturday’s 250SX event, joining Marshal Weltin of Ulby riding alongside him.

Weltin, also a rookie, said he looks at racing in an event in his bike-crazed home state as an opportunity to grow the sport.

“Having it here is great because there’s a lot of people who trail ride for fun up north,” he said. “I encourage anybody to go from trail riding to racing.”